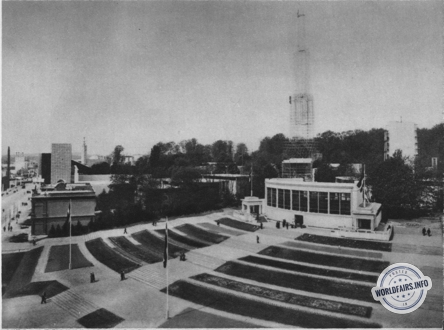 Mr Pierre Lacoste's speech described in a few colourful words the charming Latvia Pavilion. This picturesque building stood at the corner of the Avenue du Gros Tilleul and the Boulevard Emile Bockstael, between the Palais de l'Italie and the Palais de la Grande Bretagne. At the top of a grassy slope, a series of wide steps led to a vast villa, entirely built of wood, with large windows, and whose elegant silhouette was outlined against a green background. All around, a garden of 4,500 square metres recalled the gardens of the Latvian country.

The objects displayed inside evoked the main products: butter, wood and linen. Colourful frescoes by the painters Tidemans and Paka showed the port of Riga in the distant days of the caravels, and the Latvian capital today, as seen from the river Duna; the pavilion had been built to the plans of the architect Antonof, in Riga itself, then dismantled and shipped to Antwerp; no less than twenty wagons had been needed to bring it from the port of Antwerp to the Exhibition's building sites.

The back of the slightly raised pavilion, lined with tapestries, showed the portraits of Messrs Kviesis, President of the Republic, and Ulmanis, President of the Council of Ministers, below the country's coat of arms: a golden shield supported by a lion Gules and a griffin. Showcases contained remarkable samples of fabrics and carpets, linen towels with original designs, and many brightly coloured objects made by students of the Riga School of Applied Arts. Photographs contrasted Latvia's ancient monuments with modern buildings, model farms, fashionable beaches and sports fields. And many amber objects recalled one of the country's most characteristic industries. Agricultural industries were also vividly and widely represented, and a picturesque stand featured tasty sweets, candies, chocolates, gingerbread, and newly shaped, colourful porcelain: cups, plates, tumblers, and solid, elegant trinkets all in one. A selection of smoked meats, biscuits, and beverages attracted and held the attention of gourmets; while manufacturers of leather, chemicals, textiles, paper - even telephone accessories and phonograph records - demonstrated to visitors the number and complexity of Latvia's industries.