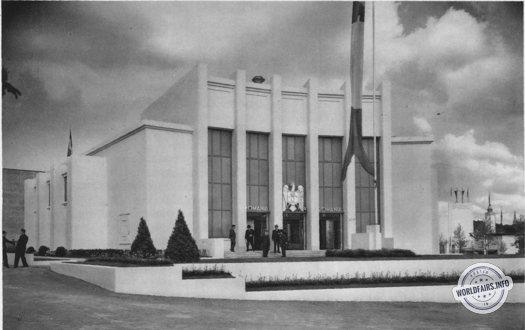 The Romanian pavilion was located next to the Dutch pavilion, at the corner of Avenues de Bouchout and Gros Tilleul; the work of the architect Moscinski, it was both modern and classical in style. A wide staircase gave access to a sober peristyle, decorated with the word "Romania" and the arms of the kingdom. Behind the Pavilion, a gallery was decorated with frames containing photographs of landscapes, monuments and seaside resorts; the outer walls bore large decorative motifs, sculpted by Mr Marc Constantinescu. Lawns and flowerbeds stretched below, while rustic jars overflowing with blue hydrangeas put brightly coloured spots on the white walls.

Upon entering, one found oneself in a hall furnished with showcases, in the middle of which stood an equestrian statuette of King Carol; these showcases contained treasures of ancient art, on loan from the Royal Museums, churches and monasteries: tapestries, precious fabrics, altar carpets woven with gold and silver, religious silverware for the most part, dating back to the fifteenth and sixteenth centuries. Small cupboards contained casts of the famous treasure of Petroasa, which the Goths left on the banks of the Danube when they left Romanian soil; as well as a faithful reproduction of the helmet discovered in Prahova by a peasant and which dates back to a thousand years before the Romanian Empire.
the Christian era.

In the large room in the middle, the Romanian General Commissariat, happily breaking with immutable customs, assembled paintings, sculptures, works of Romanian artists, representing the main trends of modern art. Similarly, an entire compartment was reserved for books, both French and Romanian. Portraits of novelists, essayists, philosophers and scholars surrounded the portrait of Queen Marie.

The other compartments were devoted to tourism, industry and peasant art; here one could find curious wood carvings, embroideries in various shades of colour - the famous Romanian embroideries, samples of which were on display for visitors. In addition, the country's major industries were soberly represented: oil, agriculture, vineyards, forestry and mining. Everywhere, diagrams and statistics had been replaced by illustrated graphs, photographs, dioramas and stereoscopic views, which were far more eloquent than the usual dry documentation.

This very fine collection had been assembled by Professor A. Tzigara-Samurcas, General Commissioner of the Romanian Government, with the collaboration of the Exhibition Commission chaired in Bucharest by Professor Gusti, director of one of the Royal Foundations, and of Messrs Busuioceanu, Bucuta, Badauta, as well as Miss Irineu, representing the Railway Directorate and Mr Gairaux, from the Ministry of Agriculture. Their efforts were supported here by the Minister of Romania, Prince Ghika and his collaborators from the Brussels Legation. S. A. At the end of his visit, he paid an eloquent tribute to the sincere friendship that unites the two peoples. "For us," he declared, "it is not so much the heroic Belgium that we admire, but the country that gives the world a unique example of work, organisation and moderation, the sure values of civilisation.