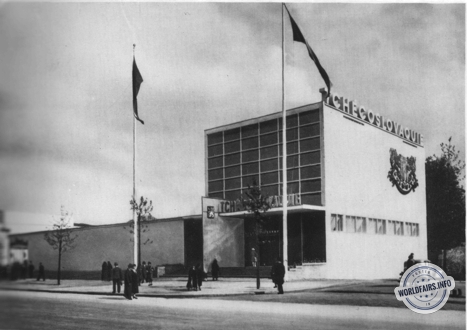 The pavilion was located in front of the Avenue du Gros Tilleul in the vicinity of other important pavilions; fifteen metres high, all white, it bore an inscription in large letters in relief above the main façade, and below it, a coat of arms 8 metres long, 4 and a half metres wide, in bright colours enhanced with gold and silver. The entrance was on the left side. After climbing seven red brick steps, one found oneself in front of the entrance gate, made of a single black glass pane more than 4 metres long; a one-piece glass partition,
A one-piece glass partition, 5 metres high, separated the entrance from the exit under the porch.

In the middle of the reception hall stood the statue of President Mazaryk, the work of the sculptor Stursa. Above the bust, a plane seemed to be hovering.

The walls of the hall were made of high blue crystal rods and transparent glass, which allowed the whole section to be seen at a glance.

Here were the representations of the official bodies: Ministry of Foreign Affairs, Public Works, Agriculture, Post Office and Railways: photographs, slides, diagrams presented in an original way, in niches or showcases lit by daylight.

The lower part of the pavilion formed a kind of gallery around an inner courtyard, which allowed for the development of a huge photographic diorama of the Tatra Mountains. Next to it was the exhibition of Czechoslovakian glass: the objects were displayed in showcases upholstered in white, grey, red, black or blue velvet; a special showcase was assigned to unique pieces, the work of Professor Dranohovsky.

Glass Christmas tree ornaments were displayed in a glassed-in area on a large steel spiral, which waved the colourful objects in it as visitors passed by.

The crystal chandelier section was also picturesquely presented; in front of two large photographs of theatre chandeliers, small fragments of cut crystal were hung up to show the onlookers the fine workmanship of Bohemian glassmakers. In the centre of the glass exhibition was a jewellery display case decorated with a garland of cut crystal beads.

Some distance away was a superb aquarium, built by Professor Brychta, against a coral background with bizarre fish and curious aquatic vegetation.

A series of large photographs showed other products of the glass and automobile industries; the next sections were devoted to pianos and musical instruments; porcelain and ceramics; grain and hop factories; Bâta shoe factories (also presented in an attractive and instructive way); and finally the heavy metal industry.

The remaining part of the pavilion was largely devoted to tourism (especially the water cities), and was connected to the pavilion by a souvenir shop, a restaurant serving Pilsen beer and specialities of the Prague cuisine.