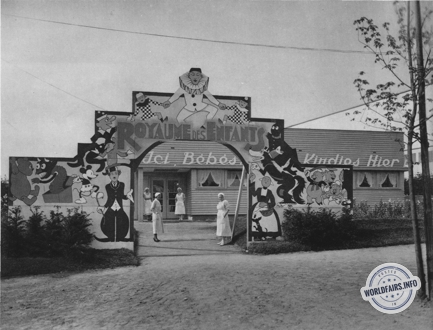 It has been rightly said that the World's Fair was resolutely placed under the sign of youth: cheerful, flowery, luminous, born of a movement of optimism and confidence in the future, it saw thousands of children come to it, among twenty million visitors: schoolchildren, college students, members of Youth Associations, of all confessions, of all opinions. And so she gave them all the most charming and cordial welcome.
In a green corner, in the shade of the high red pylons of the Charlotte entrance, childhood and youth had their own domain: the Scout Camp, the Children's Kingdom. To the right of the entrance, fir trees surrounded a meadow,
In the middle, a few tree trunks surrounded a "campfire"; the first fire was lit by Mr. Adolphe Max, surrounded by the senior officials of the Exhibition; and all summer long, Boy Scouts and Girl Guides followed one another under the tents which, on the short grass, and in the breeze, looked like big balloons filling up with gas...

As for the "Children's Kingdom", it was designed by Mrs. Ch. Fonck, with the help of the Exhibition's architectural department, according to the sketches of Mr. Robert Puttemans, the technical services, directed by Mr. Paul Célis, the planting department, under the direction of Mr. Jules Buyssens, Dr. Lust, chief physician of the Childcare Centres and Mr. O. Goossens, director of the Public Assistance and Social Works of the City of Brussels.

This original institution was a great success. In order to describe it, it will suffice to borrow the following lines from a statement published by Mrs. Fonck when H.M. Leopold III adopted the creation of "Parcs Astrid" to be established on the model of the "Kingdom of Children" of the Brussels Exhibition, in each provincial capital, to commemorate the memory of the deceased Queen.

"The directors of the Exhibition were concerned to give the visitor the maximum comfort. They took care to take away his worries as soon as he crossed the threshold of the international city and to allow him to enjoy all its pleasures.

"He could get rid of his luggage and even his dog at the entrances. How could we not have thought of the parents who wanted to avoid the fatigue of having children in their arms, in their hands or even in the cart that had to be pushed for long hours? And why not think of the disadvantages for the children themselves of being mixed up with crowds?
"Hence the idea of creating a sort of "children's cloakroom".
"But soon this rudimentary idea developed.
"For the very young, it was not enough to simply keep them, given the care they had to receive during a more or less prolonged stay. Therefore, a nursery and all the equipment it entails were needed. As for the young children, but who are able to play, it was advisable to provide them with entertainment in covered premises - because it sometimes rains in Belgium! - as well as in the open air. This was the playroom, a sandy beach with a shallow pool of water where they could have their romp under constant supervision. But there were still the children from 6 to 14 years old; how to amuse them? For them there was the scooter track, basketball, net-bail and dek-tennis, tame pigeons, the carousel, the puppet theatre.

Thus, in order to keep and entertain children of different ages for several hours, babies from 15 days to 3 years old, toddlers from 3 to 6 years old and older children, a set of varied facilities was set up for the toddlers and for them alone:
THEIR KINGDOM!

It was indeed one of the guiding ideas of this whole organisation, that the child was master in this Kingdom. That he should enjoy the maximum of well-being and know nothing but joy; while the grown-ups were simply tolerated in a domain where they were likely to come more often than necessary, as disruptors. So, no more grown-ups making observations, giving punishments, preventing them from playing. Only nurses, froebeliennes and playground monitors whose role was to make their presence forgotten as much as possible by giving care and ensuring the necessary safety.

And what were the results? The initial sceptics - for there were some - were disconcerted. In less than six months the nursery received 4,556 babies, while the children, who experienced the multiple joys of their independent state, numbered over 50,000. Even the success of the curiosity grew and more than 52,000 entries were recorded in the gardens, where without crossing the territory reserved for the young people, the adults had access. These figures speak for themselves. They show the confidence that parents, some of whom had never before been separated from their offspring, placed in the Children's City; at the same time, they show the satisfaction of the children, who often left at the end of the day with their hearts full of regret.

The aim of the Children's Kingdom was thus not only achieved but exceeded. Having aimed first at relieving parents of the worry about their children for a few hours, it had succeeded in creating for them an atmosphere of joy, of healthy and comforting distractions.

Even more than the facilities it offered, the Children's Kingdom struck foreigners, and in particular pedagogues and childcare specialists, by the complete and varied set of facilities and by the spirit of frank gaiety that prevailed there.
A playground where one goes only to have fun, such is the notion that found a concrete expression in the Children's Kingdom of the Brussels Exhibition.
Thus, through the progressively extended scope of its action, the "Children's Kingdom" was not only a useful institution for the Exhibition, but also a kind of experimental field that helped to perfect the organisation of permanent "children's parks".
This is one of the many examples of the stimulating effect of exhibitions, which give rise to initiatives not only in production and architecture, but also in the most varied and unexpected fields.