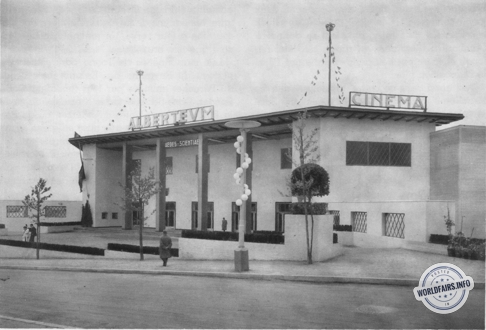 The alberteum - and the Planetarium, which complemented it - formed one of the most interesting scientific ensembles ever created for a World Fair. The promoters of this project aimed to create a museum in Brussels similar to those in Washington and Munich, dedicated to the history and popularisation of science. They obtained the necessary support for the realisation of their work, which was placed under the aegis of King Albert - with the authorisation of His Majesty King Leopold III - and named "Alberteum - Aedes Scientiae". From the very beginning, the support of the Fonds National de la Recherche Scientifique and the Comité Central Industriel was assured; moreover, they had the good fortune to obtain the diplomatic and financial support of the Belgian Government, as well as the benevolent support of the City of Brussels.

The Scientific Committee was chaired by Doctor Bordet, Nobel Prize winner and director of the Pasteur Institute of Brabant; it included many personalities from the academic, military and medical worlds; the Chairman of the Management Committee was Mr Maurice Travailleur.

The Palais de la Science stands on a plot of almost one hectare; the buildings alone cover an area of 7,500 m2. They include a large building with exhibition halls, auditoriums, a theatre and cinema - the work of the architects A. and Y. Blomme; and the Planetary, a building with a large number of rooms, including a library, a library and a library. Blomme; and the Planetary Hall, built by the architects Keym and Van Nueten, housing a dome that reproduces the celestial vault and the movement of the stars.

On entering the Alberteum, there was a large hall in the centre of which stood an equestrian statue of King Albert, the work of the sculptor Marnix d'Haveloose; the walls were adorned with two large frescoes, one showing the conquest of the ocean depths, the other the stratosphere. It is necessary to content ourselves with an enumeration, because from the moment of its opening, this true museum of science was already rich and almost complete. Visitors could find Professor Piccard's first stratospheric gondola, a retrospective of radio equipment from the very beginning - including the microphone of the famous Melba. On the right was the large auditorium with its 600 seats, its large grandstand, its stage equipped for the projection of sound films or the presentation of theatrical performances. The lighting installation and the electric organs, of rare perfection, allowed the projection of luminous scenery on a dioramic background.

Then, surrounding the great hall, came the reproduction of a radio broadcasting station, a collection of automatic telephony devices, and three rooms devoted to physics, where numerous demonstrations were presented to the public. A section of Decorative Arts showed several rooms furnished with a very modern sumptuousness and taste and constituting the flat of a film star. Then, apparatus and projectors introduced the curious to the most recent discoveries in biology and special medicine - in particular the use of the Leiden Cardiograph, which helps to detect heart disease...

The Microvivarium offered the spectacle of the life of the infinitely small, projected in giant images on the screen; the Insectarium made it possible to study insects in the environment where they live.

In the basement there was a recording and broadcasting studio; next to it, the small auditorium hosted many interesting events: talks, demonstrations, and screenings of scientific and documentary films.

The Alberteum was inaugurated during a brief ceremony: Mr Travailleur and Mr Hubert, Chairman of the Board of Directors and Managing Director, received Mr Lippens, President of the Senate, Paul Hymans, Jules Destrée, Emile Francqui, Jean Willems, Professor Piccard, Max Cosyns, the Rectors of the Universities of Brussels and Liège, Mr Adolphe Max, and numerous other personalities.


Its premises were the scene of numerous scientific or cinematographic events: among the main ones, let us mention the event in honour of Mr. Louis Lumière, the inventor of the Cinema; the International Film Festival; the competition for the best Amateur Film; the Three National Days for the Protection of Cultivated Plants, where Belgian and foreign specialists presented some forty communications of the greatest interest on the means of combating the diseases which attack horticultural, forestry or field plants. There was also the international broadcasting organised for the anniversary of the discovery of America by Christopher Columbus - a musical programme was transmitted by shortwave to the United States and Argentina; a conference by M. Bourgeois for the centenary of the discovery of America; and a conference on the theme of the "New World". Bourgeois for the centenary of the Royal Observatory of Belgium; a session devoted to "Filmed Information" on the occasion of the XVIIth University Social Week; a film session organized by the Brazilian Embassy, and the session during which a record for speed and distance was set in radio communications: a message transmitted from Brussels to New York, Montreal, Sydney, London, Buenos-Ayres, Tokio and Beirut, finally returned to Brussels, after having circled the world twice. To cover this distance, which amounts to 80,000 kilometres, the message took exactly 1 minute 40 seconds.