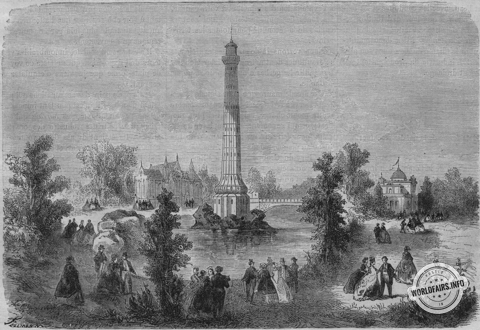 I have never been able to look at a lighthouse pointing its almost sidereal lantern into the infinite vagueness of the air, without remembering, by way of report, the poet's lines:
Oh, how many sailors have sunk in the dark nights!
O waves, that you know gloomy stories,
Deep waves dreaded by kneeling mothers!
You tell them to yourselves as you ride the tides,
And that's what gives you those desperate voices
That you have in the evening, when you come to us.

Depending on where it is placed, the lighthouse signals the reef or the port. It is the eye of the earth open to the sea. An impassive witness to shipwreck, it is nevertheless the ray that shines for the sailor in distress. The waves beat against his feet or threaten his sides. It rises in the solitudes of tormented beaches, like a question mark between salvation and death. He who turns on his aerial lens, in front of the raging sea and the raging winds, has the same existence as the keeper of an atmospheric telegraph in the midst of an insurgent country. The same isolation, and the same lack of communication with the rest of humanity. Yet the contemplative life must offer those who practice it, either by duty or by necessity, certain unknown charms, since these administrative thebaids always find competing guardians.

The lighthouse which rises in the Champ de Mars does not certainly provoke the same melancholy reflections as if it appeared in the middle of the reefs, facing the stormy sea, in the mists of the night, It does not, however, inspire any laughing idea, even though it is surrounded by festive establishments on the edge of a peaceful lake. It dominates the whole horizon by its height; and its lantern shines far over Paris.

From the foot to the level of the platform, its elevation is 48m,30. The focal plane of the device is at 52m15. The rod of its lightning rod points at 56m40. It will be used for electric projection experiments. Depending on whether the nights are clear or foggy, the differences in projection will be seen. The electric light is more intense than the oil fire: but the humid vapours of the atmosphere dissolve, so to speak, its rays. It will be necessary to continue these experiments; for electricity has hardly said its first word. It is not only light that it will give us, as it has already given us transmission: it is also destined to provide us with traction, and to replace steam as a motive force. On that day, England will no longer have to fear the exhaustion of her coal mines, which already project their excavations more than three kilometres under the sea. We shall return, moreover, to this very interesting question of the production of electric light, in connection with the establishment where it is being developed at the Champ de Mars, and which is situated in the English quarter, very near the Porte d'Iéna.

In the meantime, let us return to the Roches-Douvres Lighthouse. - The Roches-Douvres is an islet situated in the open sea, at equal distance between the island of Brehat and the island of Guernsey, 27 nautical miles, or about 50 kilometres, from the coast of Brittany off the port of Portrieux. It was to crown this rock, which is constantly battered by the waves, that the first class lighthouse was built, whose immense frame now stands near the Pont d'Orsay, on a rocky outcrop on the edge of a lake that will never be stormy.

Iron lighthouses are a recent invention. There are, however, several of them; and, two years ago, a lighthouse more or less similar to that of the Champ de Mars was built in Paris, and erected in New Caledonia, to indicate to navigators the landings of the Port de France.

Iron is used in the construction of lighthouses, although it is less durable than stone, whenever local resources do not allow for a more economical masonry construction, or when the lighthouse must be erected in the open sea on a reef that is flush with the water, exposed to strong currents, and where speed of erection is an indispensable condition for success. This was the case, or never, for the Roches-Douvres. Here, the iron is only a kind of shell that protects the solid structure, but is completely independent of it.

The lighthouse keepers have their accommodation on the ground floor of the building, which is also distributed for the accommodation of water boxes, oil boxes, coal bunkers, etc. The cross-section of the tower is externally in the form of a regular polygon with 16 sides. Inside, the diameter of the circle is 11.40 metres on the ground floor and 4 metres at the top. The interior void is 3.5 metres.

The main staircase of the tower is made of cast iron with iron stringers: it has 226 steps in one flight, up to the landing that precedes the service room. There are another 24 steps to climb, 250 in all, to reach the balcony.

The crowning platform is supported by 16 cast iron columns. It is at this level that the lantern where the lighting apparatus is installed is located. The lenticular apparatus has an internal diameter of 1.80m and is 2.60m high. It is made up of 24 annular glass lenses, placed side by side, and in the centre of which is placed the lamp used for the illumination. A clockwork machine rotates the entire optical system in order to adjust the flashes according to a specific revolution.

The character of the Roches-Douvres light is scintillating, i.e. the device gives out flashes in rapid succession, so as to produce a kind of scintillation. The luminous intensity produced by the device's flashes is 2450 becs-Carcel, with a range, in an atmosphere of average transparency, of 25 nautical miles (46 kilometres). This is the highest intensity of flashes obtained so far.

The view from the top of the lighthouse is wonderful. It is not only the Champ de Mars, it is the whole of Paris as the crow flies. But a monster awaits you up there, vertigo, that fascination of the void, from which the balloon at least frees you.

The project for the Roches-Douvres lighthouse is the work of Messrs Regnaud, Inspector General, and Allard, Chief Engineer of Bridges and Roads. M. Bertin led the work. The builder of the tower is Mr Rigolet: the lighting apparatus is the work of Mr Henri-Lepaute.

Upstream from the Pont d'Orsay, on the bank of the Seine, is a metal turret with an octagonal section. This turret, 8 metres high at its balcony, is used for signals during foggy weather, when the lantern light is powerless to signal the entrance to the port. It has 20-second red flashing lights, powered by a shale oil lamp. A bell is installed on the balcony, which is used for signals in the absence of the lights. Each bell has its own notation, to prevent confusion: it will give the signal to leave to the boats drifting in the basin of the Pont d'Iéna, and not this time to ships in distress. The work on the turret was carried out by Mr Colin: the other co-operators are the same as for the lighthouse.