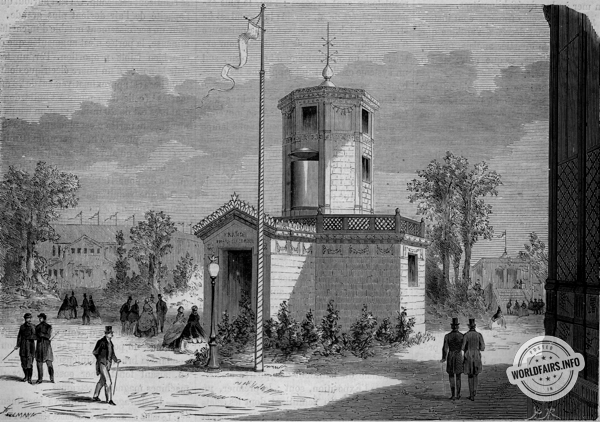 Electricity, as I have already said in this book, is a power which has scarcely been revealed and not yet subdued, and which is destined, not only to give us light and the instantaneous transmission of signs, but also to serve as a motor, in place of the depleted coal, but already aided by compressed air. All experiments in electricity are of the greatest interest to the public, for it is felt that this is where the genius of discovery must be exercised today.

Up to now, we city dwellers have hardly seen electric light except in opera sets, where its use is limited to representing moonlight or apotheosis effects. We will see it at the Champ de Mars in charge of illuminating the entire basin of the Seine, with projections that would be visible at sea over 46 kilometres away.

The French electric lighthouses are installed in this building decorated in the antique style, which is found in the English quarter, near the great gate of Iéna, and which our drawing represents faithfully.

Electric light is a modern discovery, and its application to lighthouse lighting is quite recent. It was only about thirty years ago that the means of making the electric light effects continuous were studied; several devices were devised, and in 1848 practical experiments on this new agent began at the central lighthouse workshop in Paris. These tests, attempted with batteries, gave excellent results, as to the luminous intensity; but the inconveniences arising from these sources of electricity made one conclude that the light obtained was not applicable to lighthouses. At the beginning of 1860, a new system, based on the induction currents discovered by Faraday, was tried; the experiments were continued, and the results were sufficiently satisfactory for its provisional application to a first-rate lighthouse in the Channel to be ordered at the end of 1863. One of the most frequented points of our coastline was chosen for experimentation, the Cap de la Hève, near Le Havre, which is marked by two first-rate lighthouses with fixed lights, distant from each other.
The southern lighthouse was illuminated with the light of the sun, and the southern one with the light of the sun. The southern lighthouse was illuminated with electric light, and the northern lighthouse remained lit with rapeseed oil as in the past. The observations of nearly two years showed, in terms of range, the great superiority of the southern lighthouse over the northern one: for, whatever the state of transparency of the atmosphere, the sailors always saw the electric light before the oil light. Practice had thus justified the hopes inspired by electric lighting; and on 1st November 1865, this new system was definitively applied to the two lighthouses of La Hève.

The organisation of the electric lighthouses at the Exhibition is the same as that of the Hève lighthouses.

The machines intended for the production of electric current are the magneto-electric machines of the Alliance company, designed by Noblet and perfected by Joseph Van Malderen; - they are set in motion by a locomobile, Rouffec aîné system, with a nominal force of six horses.

The currents developed by the magneto-electric machines and which are due to the rapid rotation of the metal wire coils between the poles of powerful magnets, are conducted in a regulator which carries the two coals at the tip of which the light is produced; the purpose of this regulator is to bring the coals closer together as they burn. Two of these regulators are exhibited: one, the most experienced, is by M. Serrin; the second is by M. Foucault; in both, it is the power of an electromagnet that is used to stop either a clockwork movement or an oscillating system that brings the coals together.

The intensity supplied by a magneto-electric machine can be estimated at an average of 200 Carcel's spouts. The intensity of a Carcel lamp consuming 40 grams of rapeseed oil per hour is 80 times that of a candle burning 10 grams per hour (the intensity of a 1st order rapeseed oil lamp is only 23 spouts). This high intensity of the electric flame is obtained under a very small volume, which is eight times less than that of a first-order 4-metre lamp flame. Hence, it is conceivable that the dimensions of the optical apparatus for emitting the rays have been greatly reduced. In fact, the enormous lenses of 1 m. 84 in diameter have been replaced by lenses of 0 m. 30 in diameter.

The two devices, installed one above the other in a small projecting lantern applied to one of the faces of the octagonal tower of the building of the electric lighthouses of the Exhibition, are: the first, a device for a scintillating light whose flashes follow one another from 2 seconds to 2 seconds, and the second, a device for a fixed light varying in flashes from minute to minute - These devices, executed by Mr. Sautter, are the first electric lights that have been used.
The question of expenses is interesting to know, and we will give some comparative figures of oil lighting and electric lighting. They relate to fixed lights, the only ones that are nowadays observed with electric light.

The initial costs of setting up the equipment for an oil lamp can be estimated at 47,000 francs, while those for an electric lamp are only 4,500 francs.

It would be incorrect to conclude from the merit of a lighthouse by its intensity: - its real utility is in its range; and it is when this element of appreciation is brought into play that the advantages of electric lighting are greatly reduced. It is well known that when the opacity of the air becomes greater, that for a notable increase in light intensity, the range is increased only in a very small proportion. In clear weather the range of an electric lighthouse giving 5400 beaks is approximately 28 nautical miles (that of an oil lighthouse giving 630 beaks is 20 miles); in foggy weather this range is only 13 miles (that of an oil lighthouse would be 10 miles), i.e. the increase in range given by the electric light is only 33 per cent.

However small this advantage may be in comparison with what the considerable intensity of electric light seems to promise, the new method of lighting is nevertheless of great importance, as is everything that tends to increase the safety of navigation.

It is especially for foggy weather that electric lights are recommended; and, as it is necessary for the safety of the lighting to have a double set of machines, it is possible to double the intensity of the devices during fog by operating the two magneto-electric machines together.

- Electric lighting will certainly develop on our maritime coastline:
But what will oppose its extension, as for the present, is that it is not economically applicable to the lights of weak range which are the most numerous, and that, because of the chances of accidents that the machines employed present, it cannot be used on isolated points where the resources lack and where the communications are not assured.

The old oil lighting has for him the merit of safety which electric lighting still lacks a little; but time will certainly bring this precious complement to it, and the application of Faraday's discovery will mark a progress in maritime lighting
the invention of parabolic reflectors (Teulère, 7783) and lenticular lighthouses (Fresnel, 1819). - The authors of the project of the electric lighthouses of the Exhibition are the engineers to whom the honour of the innovation of the new lighting system belongs: they are Messrs Reynaud, general inspector, and Allard, chief engineer of the bridges and roads.

M. Colin, who took an active part in the establishment of the electric lighthouses of La Hève, was also the conductor of the works at the Champ de Mars.