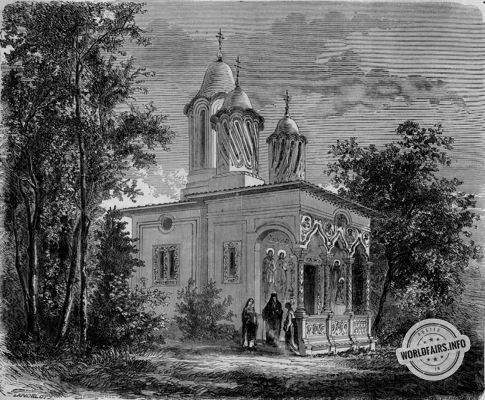 The monument that rises in the Park, between the Brousse mosque and the Mexican temple, is the diminutive of a Romanian cathedral. These three low domes, which will be painted like those of the trophy of the machine nave, represent an architecture that is no longer Byzantium and not yet Moscow. We know that the Romanians belong to the united Greek cult. Strange destinies of peoples! Their beliefs are most often what events make them. Why did the Romanians lean towards the Greek Church, while they kept in use the traditions of the Latin language, which they still speak today as a natural gift? Why schismatic Romanians, between Catholic Poland and unbelieving Turkey? Why did the Danube, which did not serve as a border upstream, on the Pesth side, break the unity of beliefs downstream, on the Bucharest side?

This would be an even more historical than theological thesis to develop, and one that has no place here. Let us take the Romanian church for what it is, a transition between Byzantine and Oriental art. This triple dome lacks a magnet needle like the temple in Mecca. Once again, there is something of the mosque and the Kremlin in this architecture, half imported, half imposed; it is a middle art, if I may so speak, which seeks its middle and does not find it, like the country it represents.

Ah! the milieu! that is what most often decides the life of a people and the destiny of individuals. Such a way of being, which one believes to be inherent in the spirit of a man or a country, depends on the position he occupies or the latitude in which he moves.

What do you think of the Romanian church on the Champ de Mars? It is curious to see as a specimen; but no matter how much you extend its proportions, it will never be large.