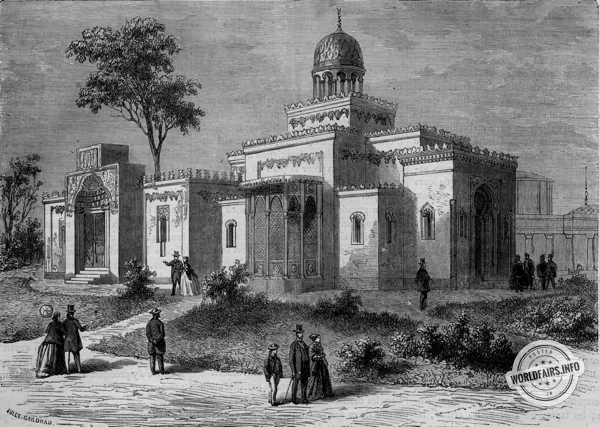 The Salemlik of H. H. the Viceroy of Egypt has been prepared by the Egyptian Commission in the hope that His Highness will come to Paris this summer, so that she can rest from her visits to the Exhibition and receive the people who will have the honour of being admitted to her.

This hope will be fulfilled. The next trip of His Highness the Viceroy of Egypt is announced as very positive. He will probably be here during the month of May. This is the brightest time in Paris, and if, as is said, several crowned heads are to meet at the Universal Exhibition at the same time, it promises a springtime like no other.

The Viceroy of Egypt is a very young and very amiable prince; he was educated in Paris; his studies have been taken very far, since he attended our Polytechnic School as a foreign student. He speaks French and most European languages admirably; he highly appreciates our arts and sciences, whose benefits he is spreading in the beautiful country he governs.

His Highness could not let slip this unique opportunity to see, in a single point of the globe, the meeting of all that is most interesting or most beautiful in the world. There she will find the sweet happiness of seeing again the places where the most beautiful years of her early youth were spent, free from the worries and grave responsibilities of supreme power.

The Salemlik of Her Highness is a charming pavilion surmounted by a dome of the purest Arabian style, as are the doors and ornaments which adorn the ceilings, the doorframes and the pediments.

On the doorway, whose workmanship is quite remarkable, there is a beautiful inscription in Arabic script borrowed from the Koran. It is an invocation to God which means:
"O you who open the doors, open to us the door of good.

This inscription is frequently put on the house of the Mohammedans.

The Arab artists did not have great resources to decorate their monuments because their religion absolutely forbids the reproduction of any living being. This prohibition of the prophet was a response to a great thought. Wishing to bring his followers back to the purest belief in the one God, and to prevent the worship of the faithful from turning away from the Supreme Being or creating new idols, he forbade the reproduction of any living being. He achieved his aim perfectly; nothing can give a fair idea of the imposing simplicity of a mosque where, as in the heart of a Muslim, there is only one object of worship and adoration, Allah!

At first glance, it would seem that this prohibition was intended to prevent the development of taste and art in general: this was not the case, however. The artists, reduced to a few fleurons or geometrical lines, were able to make marvellous use of it; they even took advantage of the beauty of the Arabic script to include it in all their friezes, thus combining respect for the sacred texts and the charm of poetry with the effect of their monuments. They imagined interlacing and entanglements that were marked by the greatest inventive genius and the most refined taste. Their works are admired by our ornamental painters and often serve as models for them. What could be more beautiful than the drawings and sculptures of the Alhambra!

This art, which is now very degenerate, has remained the heritage of a few Arab workers who are not without a certain talent. We saw before our eyes Tunisian artists, unplastered cutters, working in the park of the palace of the bey of Tunis with great skill.

Wherever the Muslim religion has extended its empire, furniture, fabrics, paintings, carpets, shawls, weapons, harnessing, everything in a word obeys the same law which forbids the reproduction of any living being, and it must be acknowledged that in the art of grouping embroidery and harmonising colours, Oriental artists have not been surpassed. The magnificent samples of the Exhibition are there to attest it.

The ornaments of the Salemlik of the Viceroy of Egypt, sculpted by the French artists of the house of Bernard and Mallet, are very remarkable specimens of this particular art, which they have reproduced in a very fine style.

By a delicate attention of the Egyptian Commission, the interior of the Salemlik recalls the room in which His Highness was born. Nothing could give a more exact idea of the actual oriental life. The furniture, the hangings, the carvings and paintings on the ceiling, the marble floor, the fountain set in the middle in a shallow basin, the two graceful terraces which give access to the garden, and the rich accessories gathered in this pavilion are a faithful image of Oriental luxury as it exists today. Around the main room, illuminated by a beautiful dome and by the large windows of the balconies, are four cabinets in which S. A. can retire to work or to relax. A. can retire to work or to rest. The doors which close this pavilion are made in Cairo by Arab artists; they are decorated with locks and cut metal appliques, truly ancient; the wood only has been rebuilt but copied exactly. The outer walls are painted with large white and blue stripes in the oriental fashion.