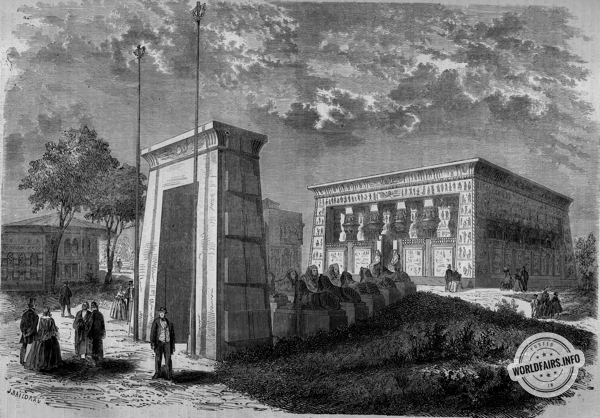 In front of the temple, a monumental gate decorated with the winged globe can be seen at each of its upper entablatures. It faithfully reproduces, in reduced proportions, one of the gates of Thebes, the City of a Hundred Gates, where the most important ruins of Egypt are found today and from which the obelisk that adorns the Place de la Concorde was extracted. Behind the door, an alley of granite sphinxes moulded on the original and obtained by a brand new process of plastic cement due to M. Chevaillier, gives an idea of what must have been these majestic avenues whose ruins have been found.

The one that existed at Thei or Thebes was more than 2000 metres long. It was not located behind the gate, but in front of it. The space between the gate of the enclosure and the steps of the temple was decorated with magnificent trees.

The location did not allow the Egyptian Commission to reproduce this layout. The one it adopted, however, gives an idea of these splendid monuments of antiquity.

This temple is a study of Egyptian archaeology, rather than the reproduction of a given building. However, as a plan, as a general arrangement, as a harmony of proportions, if not as details of sculpture, it reproduces the Kiosk of Philoe closely enough to be called with sufficient accuracy an imitation of that famous monument.

An external vestibule, formed by magnificent columns, reigns all around the sanctuary, in which some of the wonders of the Boulac Museum will be placed.

The columns of this temple are faithfully reproduced. They represent lotus stems whose very composed capitals recall the flower, with research and complications of form and colour which attest to a most advanced art.

In the blossoming of this first capital, a four-sided figure forms a second capital of an extremely original effect, it is the head of the goddess Athor who presided over joy and happiness, wife or sister of Phtah; she is part of the Egyptian trinilee. It is repeated four times on each column, topped by a piece of cloth rolled in a coil around the figure, which it frames completely, leaving only two cow ears, which recall one of the forms in which the goddess is most often represented in the temples. On these heads a third capital decorated with a tiny symbolic snake supports the I lines of the entablature, on which it projects slightly.

The columns are embedded up to the height of the capital in a wall that forms the first enclosure of the sacred monument.

The general slightly pyramidal shape gives the whole construction a simple, solid and grandiose character, which is impossible not to be struck.

All the outer walls of the temple, all the inner walls of the corridor and the sanctuary itself are covered with admirable hieroglyphic paintings. They are mostly applied on bas-reliefs in the Egyptian manner, protruding slightly from a hollow background. All the inscriptions, cartouches or figures which are thus made have been moulded on nature under the high and skilful direction of M. Mariette Bey, the great Egyptologist, whose discoveries enlarge every day the field of archaeology and world history. The other figures, which are only painted without relief or incision, were traced with the greatest care under his eyes.
Nothing is therefore more faithful than these mysterious figures which retrace most of the religious, military, industrial and gymnastic gestures and deeds of these ancient peoples.

The paintings on the outer walls are made on the overmoulds of the Ptolemaic period contemporary with the Roman Republic. All the subjects are religious, symbolic and mysterious; royal figures offer lotus flowers artistically grouped in slender palms, or ringed crosses, a sign of happiness, or brilliantly coloured jewels or other offerings to symbolic divinities in the most noble and imposing hieratic poses imaginable: small cartouches skilfully distributed as ornaments indicate the name of the sovereign or the personage making the offering.

The walls of the corridor are also covered with paintings. Those that are applied to the temple itself are painted according to the original tracings; those that decorate the wall on the side of the columns are applied on overmoulds.

Here, the paintings of the monuments of the Pharaonic period, contemporary with Moses, have been reproduced. As in the others, the subjects are purely religious; however, the character is more elevated, less elaborate and more ecstatic. One feels that at the time of these creations, art and faith shone equally. On the walls that frame the entrance door of the sanctuary or Naos, two admirable steles have been reproduced that represent on one side the departure of a distant expedition, with its warriors armed with axes, its means of transport, its boats loaded with all sorts of parcels.

On the other side, the queen receives the general on his return: the boats depicted are the pleasure and war ships that brought the queen to the expedition. The army follows with its booty and prisoners.

One could stay indefinitely contemplating these paintings: one always discovers some surprising detail, and in all of them an elevated sense of the art of painting translated with an unheard-of knowledge of drawing, sometimes faithfully observed, other times voluntarily transgressed to obey mystical conventions whose meaning we cannot grasp. Let us enter the sanctuary or Naos.

Here all the ornamentation goes back to the highest known antiquity.
In front of the entrance and in the middle of the walls on each side, there are doors made of oriental alabaster of a singular shape and complicated workmanship. The ceilings, doorframes and pillars that support the open sky are decorated in a prismatic style in which the lotus flower is the principle. But one remains confused when one sees what refined art presided over these ornaments. The interlacing of complicated lines and varied colours attest to a profound science, free from any naivety or simplicity bordering on ignorance: it is incredible!

In the midst of these ornaments, two names are incessantly repeated in two cartouches, similar however. They are the names of Ti and Phtah-hotep, officials of Memphis, to whose tomb belong almost all the subjects reproduced on the steles. Nothing here is symbolic or religious. They are admirable reproductions of scenes of human life of that time. Fishing, hunting, arts and crafts, animals of all kinds, birds, fish, oxen, horses, dogs, donkeys admirably studied, with a deep feeling for art and a great conscience; the smallest details, gymnastic games, tricks, boats, nets, are faithfully reproduced; finally it is a complete reproduction of the life of the Egyptians of the most remote antiquity.

One never tires of looking at these admirable steles. They are authentic, since they are moulded on the monuments themselves and painted under the eyes of Mr. Mariette Bey by a historical painter, whose name we record with the greatest pleasure, to pay tribute to the enlightened zeal with which he directed the crowd of talented young artists whom he employed to execute these remarkable paintings.

Mr. Bin, a history painter, grand prix of Home and several times medallist, has done a very fine job on the inner and outer walls of the temple of Philoe; what a pity that it should all last so short a time!