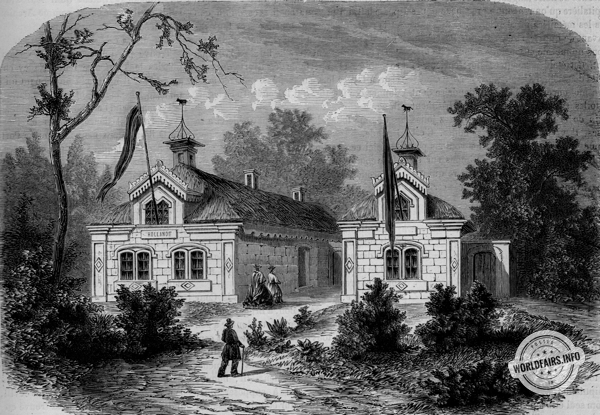 This title alone indicates a whole world of work, ideas, and industries combined.

It is especially in the farmhouse that the Dutch character is well manifested. There, along with cleanliness, well-being and comfort, reign intelligence, order and activity, those three precious qualities which have made the inhabitants of this little corner of the world, which is called Holland, a people at once great in industry and agriculture.

Let us speak especially of the latter branch, which comes more particularly into our domain today, and which interests us all the more because the difficulties to be overcome have been more considerable.

It is true that they are our masters of agriculture, those who, from the most ungrateful soil in the world, have been able to create the fertile plains of which the Netherlands is justly proud.

But before following them in their model farm, let us point out that remarkable cleanliness of the Dutch, without which, in a climate at least as foggy as that of London, the most terrible diseases would not be slow to wreak cruel havoc among the people.

The Dutch flag, which flies at the top of the thatched roof, invites us to first take a look outside.

Here there is no luxury, but a cleanliness so coquettish that it almost makes the simplest things seem luxurious.

The farmhouse consists of two wooden houses painted yellow and imitating, on certain facades, the stone constructions; the columns of each corner are whitewashed; and this contrast of colours does not lack originality.

There is no ornament or sculpture on the windows or doors. Simplicity is the mistress of the house, if cleanliness is its constant guest.

A single chimney rises above each wing of the building. Each of these two chimneys is surmounted by a weathervane representing a horse and an ox, two animals so useful, not to say indispensable, to the prosperity of agriculture in the Netherlands.

Finally, after a last look at the trees surrounding the farm and the haystack next to it, let us knock; and friendly farm women, lively and alert, will come to open the door without waiting long.

Let us begin, if you please, with the cheese machine room. It deserves some attention from us, because
because cheese is a major part of Dutch commerce.

It is a very simple room, with walls made of the same material as the rest of the house. The floor is made of brick. On one side is a pump with a trough, on the other the cheese machine, which, to put it briefly, is no different from other machines for the same purpose.

Next to it is the large stable for the cows. These citizens are, my faith, not to be pitied; and there is such a vagrant of the barriers of Paris who would be very proud to have such a beautiful bedroom.

Further on, there is another stable, that of the gentlemen whose smoked hams adorn our feasts on feast days.

This last stable is adjoined by a stable capable of holding two horses and through which one can climb to the attic.

But let's leave aside the domestic animals' rooms and enter the master's room.

It is a fairly large, well-decorated room, where one passes from the pleasures of the holiday to those of conversation.

If you want to continue to follow us, dear readers, in our peregrinations, we will lead you to a stove.

Oh, this is not a blast furnace: it does not have the proud presence of the haunting chimney of the factories. It is simpler, more modest and yet much more useful: it is the bread oven.

Finally, let us visit the last room on the ground floor.

It has nothing remarkable in itself; its floor is of the simplest; need I say it? Well, there is none. It is here that a peaceful Friesian horse, probably one-eyed, turns from morning to night around a movable post which, by means of wooden gears, communicates with the barrel where the butter is separated from the milk.

The barrel in question is at least as important to these good people as the Burgundy grape vat. Judge!

This room communicates with a place that one would gladly take for a henhouse, if it were not for a large space left between the wooden fences.

There, the farmers wash their utensils, their buckets, their milk boxes and give them that varnish of cleanliness that you know.

But for the rest, if you doubt, incredulous reader, come down with us to the cellar. Be careful, for example: for the Dutch staircase has only one infallible property, and that is to break the back of anyone who descends or climbs it without taking the greatest precautions.

Let's start with the milk cans: they sparkle with a thousand golden lights and reflect the faint light that the window wells let in.

Instead of being made of tin (and what a tin it is!), the Dutch milk cans are made of brass, which certainly does not make them uglier than ours, quite the contrary: they are only maintained, polished and cleaned much better than ours.

Here and there, Dutch products are displayed on the shelves; small barrels of butter, cheeses, etc.; then, wooden buckets with copper rings; and, if you are really curious to know what this wooden branch ending with two copper chains is, the chatelaine of this house will easily explain it to you, not in French of course. It is a milk yoke. The milkmaid, who goes to take her goods to the towns in the morning, passes her neck through the middle of the semicircle formed by the wood of the yoke, and she hangs her cans on the hooks that finish each chain. This surprises you, good Parisians; but we are not in Paris.

The milkmaids follow each other and... grace for the rest.

Before you leave the cellar, look at that lonely ball in the corner over there, which looks very bored. It's a cheese made in Schiedam, Schiedam!... the city of good cheeses, the Neufchâtel, but at the same time and above all the Cognac of the Netherlands. What a good genever! Try some and you will see.

But I think we can stop our walk today. We have seen everything on the farm, and all that remains is for us to thank from the bottom of our hearts the kind farmer who, for lack of knowledge of our language, possesses that hospitable grace that one almost always finds on Dutch farms.

Before leaving the Dutch section, let us say a word about the diamond-cutting factory. This establishment is very curious and deserves to be visited.
Another word about the Dutch school, whose paintings are exhibited in a building next to the farm. There are some rather pretty things there, but there are also some rather ugly ones. It's like everywhere. But we don't want to finish without congratulating Mr. C. Simons on his painting. Agar and Ishmael is a work that assures its author of a certain success.