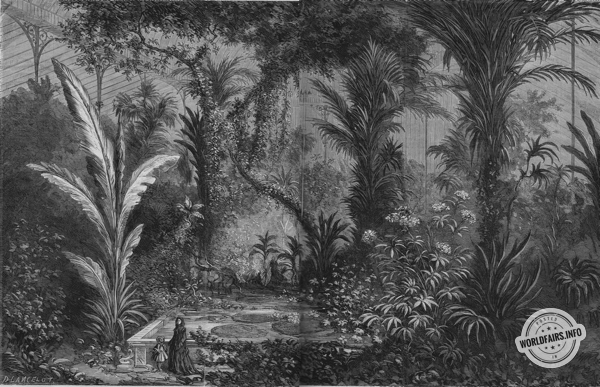 I would like to see here at least one specimen of a double-sided greenhouse. The invention exists, I don't know where: it seems to me excellent in theory, and I was curious to study its practice. You know that in cold countries, and even in Paris in certain hotels exposed to the north, fuel is saved by installing double windows. The layer of air enclosed between two glass frames is like a transparent mattress which retains the heat in the rooms and does not allow it to be lost. This system applied to hot or temperate greenhouses puts an invisible, impalpable, airy furnace around the plants, which lets the sun's rays in and does not let the acquired heat escape.

The other device that is missing here is the portable greenhouse that Alphonse Karr invented for the benefit of our orange trees. The honourable and witty gardener who reigns in Nice is not an admirer of orange trees in boxes: he is a hundred times right. Nothing is more miserable and ugly than the transformation of such a beautiful tree into a Nuremberg toy. Add to this the fact that the weight of the boxes and the difficulty of transport condemn us to limit the growth of the orange trees by ferocious pruning. Wouldn't it be very profitable, in the present state of our industry, to transport the greenhouses and leave the orange trees in place? A well-built greenhouse, with a view to this operation, can be assembled and dismantled in three days. Suppose that the orange trees [of the Tuileries] were put in the ground; that instead of arranging them like plant factionaries along an avenue, they were brought together in groups; that instead of pruning them to the bone, they were allowed to grow at ease. What an admirable grove would we not have? When the first cold weather arrives, the same workers who transported the boxes to the orangery would bring the orangery in detail and build it around the trees. When the roof became too low, it would be raised by a system analogous to the rise of the beehives. But that's enough talk about what's missing; I'll come back to what is.

Mr. Dormois's greenhouse is a veritable monument of iron and glass; an aerial palace of unprecedented audacity. One could transplant all the palms of an oasis into it, and they would vegetate there at ease. For the time being, only masons, glaziers, and other products of Parisian civilisation are growing there; but everything comes to those who wait. I have already seen, through the windows, a date tree and a dwarf palm tree; wait! We shall see many others. It only takes a little imagination to picture the wonders that will abound under this dome. Raise to the superlative the great greenhouse, so well decorated, of the Jardin d'Acclimatation.

Mr. Dormois built this noble and brilliant edifice; Mr. Célart glazed it; Messrs. Cerbelaud and Gervais are doing their best to heat it. In the coming season, their task will be easy: but if we were in December, we would have to see. Who knows if the experiment will not be done next winter? For it is difficult and painful to suppose that so many beautiful things have been built only to be thrown away in six months.

In front of the monumental greenhouse, Mr. Hochereau has built a huge hall called the salon d'honneur. The great greenhouse and the giant salon which precedes it will serve for the successive exhibition of the collections which will come to compete for the prizes.

This parade of plants in pots or boxes began a fortnight ago; it will last the whole season. The awards to be given are innumerable: care has been taken to stagger the competitions. The Moniteur has already published a long list of medals, we have already seen a competition for vegetables and preserved fruits, a competition for early fruits where the grapes, cherries and strawberries of 1867 made your mouth water. Chinese primroses, cyclamen, azaleas, cineraria, ericas, forced roses, camellias, bromeliads, agaves, orchids and twenty other dazzling or curious families are housed for the time being in the various greenhouses of the garden. Within eight days you will see a collection of English azaleas in bloom, beautifully trained, cone-shaped, and from base to tip all in bloom. I like to think that there will not be any doubles. It is a false taste that has led some gardeners to double the flowers of azaleas, like those of petunias and volubilis, whose main merit lies in their transparent and frail delicacy.

The Dutch greenhouse of Mr. Thiry, along the Avenue de l'École Militaire, contains at the moment a very fine collection of cacti I recommend it to your studies. The cacti are not elegant like the lataniers or the dracænas: they look like nature's bobos. But this variety in the horrible has its charm, and besides the ugliest cacti often give exquisite flowers. Horticulture has achieved an incredible feat by grafting these greenish fleshy sections onto each other. The rarest and most delicate varieties are grown on the candle, which is hardy of all. Here, the candle (cereus) plays the same role as the simple camellia in the production of precious camellias. Cuttings are made from the simple camellia, which grows well, and an eye taken from a rare plant is grafted onto it.

In the winter garden built by Mr. Herbaumont, one has not finished admiring a collection of very remarkable camellias. I guessed, under a thick canvas cover, a pandanus, the most beautiful perhaps that exists in France.

Each day will renew the furniture of these glass houses, and the curiosity of the amateurs will be kept in suspense until the end of the season.