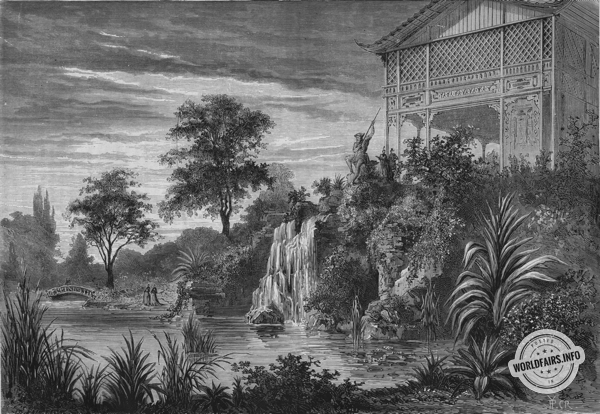 No one has to like waterfalls; and not everyone likes artificial rocks.

With these reservations duly established, I dare to confess my weakness for the water that falls in the middle of real or fake rocks. This continuous and yet varied movement animates the gardens and gives them an air of life; the steam of a falling stream spreads a visible and tangible freshness in the air. And then, do you know anything so sweet, so discreet and so harmonious as this song of the little waterfalls? The songs of the modern theatre and its cascades of dubious taste charm me much less.

The rocks were made (that's the word) by M. Combaz. They have varied, pleasant and rather rustic forms. They have been skilfully decorated with green shrubs. The water falls into a small lake where the Fontainebleau carp are due to move in next week. These good old women will get drunk on the first day: they will drink water whipped up by movement and so richly oxygenated that the trout of the torrent will be able to cope with it.

I have seen carpenters building a small raft that the Chinese will disguise as a floating island. If the experiment succeeds, all the owners of ponds will have the luxury of a floating island within six months, and the least bourgeois in Rueil will launch a pocket-sized Delos onto his pond.

The depth of the lake (as it is called) is not the same everywhere. You will notice towards the middle a long bank of bitumen, which extends under the water from end to end. This underwater reef (while we're at it) is in the axis of the Military School. It represents a sewer which it was impossible to destroy, but which M. Barillet has lowered by a very meritorious tour de force, for which no one will be grateful to him, because the public will not guess anything.