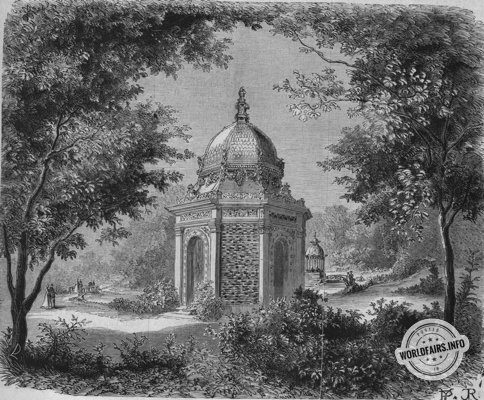 I have saved the pearl of this Exhibition for last. This little pavilion, so simple and so modest in appearance, is a work as important in its kind as the greenhouse of Mr. Dormois.

The engraving shows you only the outside, and for good reason - the inside will not be visible, that is to say completed, until the first days of May. Someone has seen it, however. How else would I talk about it?

This pavilion, which will naturally become historic, already has a history before it is finished.

The most artistic of Parisian upholsterers, Mr Henri Penon, had searched in vain for twenty-five square metres in the tin palace to make a room or a salon. In desperation, and firmly resolved to exhibit anywhere, he asked permission to build in the Park. The Commission offered him a place in the middle of the reserved garden. It was the end of October; he had to hurry to arrive on time, and even to arrive late.

Mr. Penon set out on the campaign: he found a young architect of great talent, Mr. Demimuid, inspector of the works of the City, who, for the sake of glory, drew up the plans for the construction, directed the work, and brought together twelve contractors of good will who agreed to exhibit the various products of their industry in common. M. Montjoye did the masonry, M. Blancheton the carpentry, M. Poupart the roofing and plumbing, M. Gilbert the carpentry, M. Ducros the locksmithing, M. Murgey the sculpture, M. Luce the painting, M. Chamouillet the mirror work; M. Muller, Jean and Rey shared the ornaments of bare or enamelled ceramics; M. Prudhomme took care of the hardware, the bronzes and the blinds. The pavilion, seen from the outside, is thus the collective exhibition of twelve artists or industrialists, not counting the architect. The whole of their work is very happy, and the detail seems to me to be irreproachable.

The architect's aim was to create a polychrome construction which, through the brightness and variety of colours, would brighten up the severe appearance of a park, and which would nevertheless be solid enough to withstand the bad weather of the seasons and to last indefinitely in a destructive climate like ours. These two principles governed the choice of materials.

The pavilion is octagonal in shape and sits on the edge of a road. It is reached by a three-step staircase. Thanks to the slope of the ground, it was possible to place a projecting balcony at the opposite end, facing the small lake. The four large windows that illuminate the interior are like so many windows that embrace the most beautiful landscapes of the garden.

The exposed millstone base, topped by a hard stone band, supports the ashlar framework, the courses of which correspond to the heights of the bricks that fill the cut sections. These glazed bricks are of three shades, blue, green and yellow. The doorframes of the bays are decorated with terracotta rosettes coated with a turquoise glaze in each of the courses of the uprights and in each of the arches; a small stone moulding frames each rosette. The tympanums of artistic earthenware set off their delicate ornaments against a blue background. The frieze around the pavilion is richly decorated in a bright yellow. The pink terracotta gutter suspends above each bay a faience medallion where the letter E, entwined with myrtle trees, is spread out on an azure field. The medallions are topped by the imperial crown.

The framework of the dome is made of oak, covered with lead and slate. A large groove running from the gutter opens up the chord, which has an eagle at each corner supporting ornate hips. The lower part of the membrane is decorated with garlands that follow one another, supported by rosettes with floating ribbons. The crown (for all the buildings are crowned in this earthly paradise), the crown ends in a pine cone supported on a base with scrolls at the corners and gadroons at the bottom. From this, mantling arises that falls on each side of the roof. The slates are cut in snake scales.

The balconies are made of wrought iron and embossed sheet metal; the one facing the lake is beautifully executed.

Forgive me for the somewhat technical detail of this description. I insist on the details because they deserve to be studied one after the other; but when you stand in front of the pavilion, you will see that they all merge into a harmonious and simple whole. This little building, whose interior does indeed measure fifty metres in surface area, will seem to you as perfectly made, as naturally come about as if it had cost no one any effort. In four words, you would think it had grown there: this is the highest praise that can be given to the architect, Mr. Demimuid.

As for the interior, Mr Henri Penon had reserved it for himself. He set himself the task of deploying all his means, of displaying all his resources, of enclosing in a relatively narrow space all the elegance and delicacy of the artistic industry in which he is a master.

Here is a brief description of the problem he has solved. Given a woman of the highest rank who retains in the midst of splendour a taste for country pleasures, create for her, in her park, an installation as comfortable as that of the palaces; surround her with the pleasant forms and beautiful colours with which her eyes are accustomed, and yet ensure that in this delightful environment everything speaks to her of the country and nothing of the court or the city; execute around her a sort of pastoral symphony in which not a single mundane idea deters.

This starting point, which is excellent, led Mr Penon to a very original conception. He said to himself: I want to make a salon interior that is a rustic poem written in natural wood and painted or dyed fabric. No more gold than on the hand; I am wrong: there is a little in the middle of the carpet, under the feet of the noble and beautiful owner.

The poem is nothing but a dawn. It necessarily implies the use of degraded colours. The whole interior, the sky, the carpet and the hangings, must express the soft, laughing effects of the emerging light. The day is not supposed to come through the windows, but through four large satin panels where the paint stands out against a background of gradated dye that expresses the increasing intensity of the rising sun.

The interior is octagonal, as we know. Four sides are taken up by the four windows, two of which open into doors; there were therefore four sides in all to be decorated. Each of them is divided vertically into three panels, one large and two small. The whole is connected by a natural sycamore woodwork, carved in the mass.

The four large subjects, painted on shaded satin, represent
1° The awakening of man;
2° The birds;
3° Other animals;
4° Flowers.

In the hypothesis adopted by the artist, the maximum light should only arrive in the middle of the room. He indicates this effect on a rustic carpet, sown with oak and chestnut branches. At the circumference, the background is a mid-tone violet; it lightens by degrees until it reaches the centre where gold bursts forth in a rosette of leaves and flowers.

The woodwork, the curtains, the furniture, the chandelier, everything is flower, foliage or fruit. The painted flowers are grouped in frames of sculpted flowers; all that nature in the country provides of the most graceful and tender has come to be piled up in this adorable room; one is as if intoxicated with natural beauties; a cup of milk on top of that, and your head would turn!

The furniture is of a great taste of deliberate simplicity. In the first panel, the chaise longue with its pedestal table, its hand mirror and its stool: all in natural wood and embroidered with country flowers. Panels 2 and 4, in order to sacrifice something to the false gods of symmetry, are filled with a shepherdess and two light chairs; the third contains the music installation: harp, chair and music stand of painted wood, green-yellow and blue, with a pearly effect. The harp table is covered with violet, pink and white cameo paintings. They represent: at the bottom, the mother indicating harmony to her child; the lovers intoxicated with harmony; higher up, groups of children staggering around playing various instruments.

To the right and left, in front of the windows, carved wooden planters with a marble base: dolphins, reeds and shells. In front of the balcony, a small natural wood desk and a writing desk. This desk alone would deserve a page of commentary: it is all sparkling with charming intentions. On the lid, a love, with bandaged eyes, is pushing aside curious young girls. At the bottom, we see Argus atoning for his indiscretion.

But I do not know myself if I am allowed to deflate by a premature description this marvellous little corner which will not be exhibited for eight days.

It is Mr. Henri Penon who conceived, sketched, drew, and executed this ensemble and all these details. The execution belongs half to his partner, who is his brother. These young people have a whole school of decorative painters on hand, the eldest of whom is barely twenty-five years old. They have made, are making and will make pupils. The so French and so Parisian art of tapestry will owe much to their initiative and their example. They are not rich, they are just starting out, and here they are, providing an exorbitant share in a collective work which must last six months and cost 200,000 francs at least.

Has Mr Henri Penon, as he believes, invented a new style of decoration? I dare not comment on that. He owes much to the artists of the time of Louis XVI, although he makes a point of borrowing nothing from them.

What undoubtedly belongs to him is the feeling for beauty, the rage to do well, and a certain contempt for obstacles which produced a truly curious result in the course of this winter.

I told you that the main subjects of his interior decoration are painted on gradient satin. But gradient colours have hitherto been obtained only by weaving or by printing; beautiful by weaving, mediocre by printing when it gives them.

Mr. Penon did not have the time to set up a loom for himself in the large Lyons factory, and the fabric he needed was not ready-made. He decided to dye his satin, but never in his life had a dyer known how to degrade the colours. The most skilled dyers in Paris, consulted one after the other, declared the thing impossible, and yet Mr. Penon was not discouraged. He finally came across a good man who first apologised like the others, then drank one too many and found the solution he was looking for at the bottom of his glass. Drunk with joy and something else, the inventor came running one fine evening shouting like Archimedes: "I've found it! "He had used the dye at 98 degrees instead of 15; what else had he done? I don't know, but from now on it will be possible to dye morning-coloured fabrics in a vat.