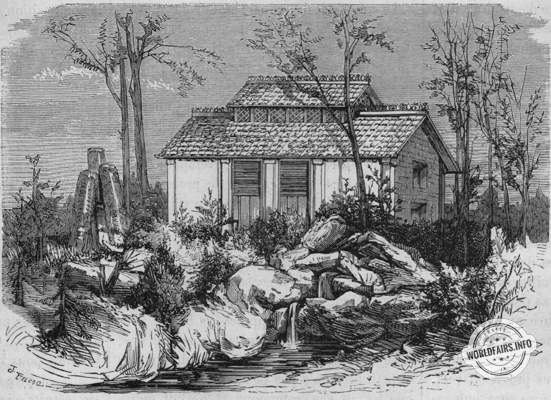 Amongst all the splendours which are displayed in the park of the Universal Exhibition, Egyptian palaces, Chinese mansions, Hindu pagodas, the public passes almost indifferently before two unfinished constructions, whose simple architecture does not attract its dazzled eyes. These two constructions, however, deserve that an observer and a philosopher stop to consider them. They present to the eye neither gilding, nor stone lace, nor capricious arabesques, nor majestic columns, nor granite sphinxes, all those splendours of the past; nor do they offer the monotonous symmetry of the European buildings of the nineteenth century; they are humble huts, whose greatness is all moral; for, in the midst of all these riches that are dead, they symbolise the birth of a future.

One is a dwelling house of American settlers; the other is a school, also American.

This is more or less how the United States is being colonised:
In the immense, still uninhabited regions, the land is given freely. All the emigrant has to do is pay the government a registration fee of ten dollars. In return for this small sum, the law recognises him as the owner of the land that suits him forever. He leaves. It is in his interest to have a large family; for nature, as we know, makes the family a wealth. Our civilisation alone makes it a ruin. There, children are arms, here they are mouths.

Wherever he goes, the emigrant is sure of a good reception. His neighbours greeted his arrival with enthusiasm. Another difference. There, the arrival of a foreigner is a help to the colony. The more we are, the more we will prosper. As soon as there are twenty of us, roads will be built; as soon as there are a hundred, a railway will come. The houses will become villages, the village will become a town, the products will be sold, that will be wealth. So, poor or rich, the emigrant is equally acclaimed.

What does it matter if he is poor? As soon as he arrives, his first concern is to warn his neighbours. In this land, there are neighbours from sixty leagues away. No one fails to show up. A day is set for the new citizen's house to be built. In the meantime, he and his relatives have felled trees; they have squared them; they have made rough beams of them; they have cut indentations in them so that they can fit into each other. One morning, all the workers arrived. The emigrant has made known his position of fortune; if he can, he prepares a meal for all the good people who come; if he has nothing, not one less comes. Only each one brings with him his provisions; and, charmingly, these provisions are always excessive, so that from the remains, as from the feast of Jesus Christ, the new owner sometimes lives for a month.

As soon as all the men are together, the work is quickly done. From the superimposed trunks, a square house is formed. The gaps are filled with a kind of cement, made of chopped straw and kneaded earth. Filling these gaps is called houziguer, and it is the last job. The roof consists of small planks cut from oak squares and tightly fitted together. The windows are basic, a saw does all the work. Two beams are cut wherever you want: this produces a hole. The same is done for the door, which never closes.

In this regard, a thought. When a settler leaves his house to go to work, he puts a simple board in front of the door to prevent the animals from entering. He is not afraid of men, there are no thieves in these countries. Why steal? Any passer-by - has only to ask for what he needs. If he is hungry, he is given food; if he is thirsty, he is given drink; if he wants shelter, he is given it; that is why stealing is punished by death. The thief has no excuse.

Let us return to the house.

It obviously varies according to the climate. Higher and with a gallery in the South, so that one can breathe, and protect oneself from floods and snakes; better enclosed and more solid in the North, in order to resist the cold and the wind. It is called a log house. The interior forms a single room. There is a pen for the domestic animals. Most of the time the animals roam freely and cost nothing to feed. The oxen and horses are simply marked, and when they are needed, they are found.

This is the primitive house. The one at the Exhibition is a second-class house. When this house exists, there is already a village.

The settler establishes himself in this way: around his house is an open space which he surrounds with palisades. This space is mainly intended to stop the very frequent fires in the meadows. One of the first things the settler did was to get a pig. The pig is the indispensable animal, for it has in America one more use than here. It eats or kills snakes. The latter can do nothing to its tough body; moreover, the lard that surrounds it preserves it from venom. There is nothing more curious than to see children playing with these pigs. Often, in the South, one sees a little negro, two or three years old, lurking in a corner, or among the branches; he is on the lookout for the pig, for which he has prepared some delicacy. As soon as the pig is within range, as soon as it has approached and stooped, the child takes off and jumps on its back. The frightened animal gallops away; but the little negro is not afraid, he holds it by the ears, clings to it and becomes one with the pig. Joyful, distraught, enchanted, he goes on like this, until the beast succeeds in throwing him off.

The settler immediately starts to clear the land. We will not go into the details of his exploitation. If he is industrious and intelligent, he soon reaps the fruits of his labour. The first year provides him with a living; the second year allows him to build a house, which I call a second degree house.

This house is more comfortable, the boards are joined to the bricks. There are several rooms. I saw one with three rooms, a kitchen, a sort of shed, and a huge space around which all the beds were arranged, and in the middle of which was a gigantic table.

It was then that the elegant dwellings appeared in the South, with a circular gallery, tents, curtains and so on. The family almost always stands on this gallery. The pillars that support the house are sometimes made of iron, but more often of brick.

In the third year, the settler is already saving money. A few more years and he will be rich.

Let us now witness the formation of the village, or, better said, the town. A town is quickly made in the United States. What constitutes it is the school. As soon as a number of houses are brought together within a certain radius, a school is immediately built. I have seen singular examples of this speed of institution. I was one of those who laid the foundation of the capital of Kansas, Topeka. In Topeka, from the beginning, there was a school, a temple, a grocer, a printing office, and a resident....... In all, five
houses. Was the single resident married? Did he have children? I don't know. The first idea was to send a schoolmaster; the church followed; then the newspaper.

Nothing was more amusing than to consider the way in which this newspaper was made. It had an editor, who himself helped with the typesetting; the schoolmaster was a typesetter; the pastor was a typesetter; the grocer himself helped in some way. In a word, the whole town got together to make its newspaper. Afterwards, everyone would read it at leisure. And then there was the inhabitant, similar to Leander in the Plaideurs, who could also say: I am the Assembly. What happened? Soon a courier came, the roads were made, the newspaper was advertised; little by little the town became the capital of the State of Kansas.

An admirable country, superb in its confidence in the future... This is not the kind of country that would wait to do something until people were ready for it.... Act first, and then minds come to understand: that is the strength of the United States of America.

The grocer, in the new Western States, sells everything possible, from sealing loaves to frock coats, from salt meat to wardrobes. His shop is a bazaar. In reality, he is not a merchant; he is the merchant.

The house, which is at the Exhibition, is, as we have said, a house of the second degree. Again, it is a Southern house; the North does not build like this. A third degree gives the great plantation, the home of the rich man, whether he owns it in a city or cultivates it on the plain. The latter dwelling naturally contains all the comforts of Europe, for in all regions money equalises situations.

These few lines sufficiently indicate how new settlements are formed in the United States. This view is general; according to the latitudes, differences are established. But everywhere, indiscriminately, one finds the same will, the same energy, and consequently, the same success.

As we shall say at the outset, this exhibition at the World's Fair deserves to attract attention. It will teach all those who suffer how healthy and active men can today take advantage of the state of the world, and how entire families, without resources and without hopes, can find, in one of the most beautiful countries on earth, secure life, liberty, and happiness. For this, no strange virtues or exceptional fortunes are needed; all that is required is hope and will.