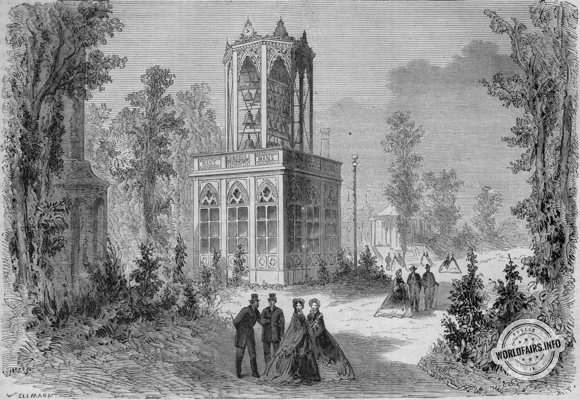 This pavilion of bells, which fills the whole of the French quarter with its joyful vibrations, is one of the great curiosities of the Champ de Mars.
Let's follow the crowd that goes this way, and perform our variations on the motif of the bells.

The art of chimes goes back a long way. It was perfected a long time ago by a bell founder from Aalst, named Barthélemy Koeck, who spread it throughout Flanders and made a great fortune in his trade. The art of carillons consists in uniting the sounds of several bells of different timbres in a combination of harmony or melody.

The only carillon known to the Parisians was in the Samaritaine; they destroyed it. It is therefore not surprising that they are curious about the improved carillon of the Champ de Mars, as if it were something unknown and striking because of its almost magical effects.

To tell the truth, carillons have never gone beyond the region of Flanders, where they abound, and of some parts of Northern Germany, where the science of ringing is less perfected.

Everyone has heard of the Dunkirk carillon, but who has ever been to hear it? The Antwerp carillon consists of ninety-nine bells. Those who
have been to Antwerp to see the Sailors' Café, the Descent from the Cross and the Botanical Gardens, probably do not know what the carillon is. Even today, Ghent would support a siege to defend its bells, prouder than another city in Flanders that let Dijon take theirs.

I can therefore explain very well the love of the Flemings for their bells, which are the voice of joy or sorrow for a whole people: what I can explain less is that this passion of the Flemings has never been shared by us.

"It is a silly music that of bells," says J. J. Rousseau in the article Carillon in his Dictionary of Music. I fear that the great writer wrote this with his nerves. Nothing is more unbearable, indeed, than the long, monotonous hum of bells shaken at random. In the towns of Savoy and Switzerland, where J. J. Rousseau came from, bells are rung at all hours. Ringing the bells is a luxury that every private individual gives himself at the slightest event that occurs in his private life, happy or unhappy. How many bathers have not been driven away from Aix en Savoie by the perpetual sound of the agitated bells! It is by the memory I myself have kept that I can explain the annoyed sentence of the philosopher and music lover of Geneva.

But we must not let the confused hum of the bells make us unjust towards a well-ordered chime.

Let us approach, then, without apprehension of nerves, the pavilion of the bells of the Champ de Mars, and forget the loud rumours made by the Prussian bells under the nave of the machines, which have more than once prevented the members of the jury from getting along during their tour of classes. Let us also forget the Austrian bells which seem to have been placed on the edge of an alley so that every mischievous walker can set them off as they pass, which will eventually cause the German quarter to desert altogether.

The first thing that strikes us about M. Bollée's pavilion is the small difference in the calibre of the bells that make up the carillon. There are 43 bells forming four full octaves. In the rules laid down so far to the founder, the measures of each bell are determined on the string theory, according to which all ascending octaves are reduced, as measures, to half the bases of the preceding octave. Thus, let us see what the string theory applied to vibrations would have produced in the present case: - Given a first bell with a diameter of 1.50 m., the smallest, arriving after four octaves, would be only 0.085 m. and would weigh only 800 g., i.e. it would be reduced to about the size of a table bell.

The great difficulty for the founders, in following the old bases, was to give a whole set of bells a relative equality of sound intensity, to make the small bells, for example, be heard on a par with the large ones. It was hardly possible to achieve this relative unity of pitch except for the extent of an octave.

In order to obtain four harmonic octaves without too great a disproportion in calibre, it was therefore necessary to modify the old theory and to calculate the vibrations on a new basis.

The tuning of the timbres is adjusted by means of vibration-counting instruments; the number of vibrations of each timbre is calculated by means of a quotient progression, and in such a way as to give all semitones absolutely equal intervals.

By combining the vibrations with these new data, the founder of the Champ de Mars carillon succeeded in giving his smallest bell a weight of sixteen kilograms, instead of the 800 grams that this bell would have weighed with the old system. This means that the 43 bells compete at the same pitch, with no appreciable difference in the loudness of each.

I could tell you exactly how many vibrations each key of this metal keyboard makes. But what is the point? Would I be sure to explain clearly to the reader what I am not sure I have fully understood myself? Our designers put us to a cruel test. Depending on the whim of their pencil, we are obliged to follow them around the world, or else around science and industry. But let them go! They will not tire us.

Establishing the ringing of bells on a more perfect proportionality of vibrations was the important thing. But it was also necessary to find a striking system that would allow all music written for percussion instruments to be struck on the cylinder with greater speed: for, whether it is a question of touching the piano, the organ or the carillon, the system of striking is the same. The cylinder, which is moved by a machine armed with a double counter-wheel, is provided with holes where the cams corresponding to the hammers are fixed, and whose position is precisely determined on the cylinder. To form a tune on the cylinder, the operation is therefore reduced to knowing how to read the music, and to fixing the cams in the holes of the cylinder, according to the rules of musical writing. This operation is very fast and quite easy to use. The cylinder is arranged so as to receive either a large tune or a number of small tunes at will: for it has a counting wheel which allows stops to be made wherever they are necessary.

This improvement in the playing of bells is of particular interest to carillonneurs. One cannot imagine what violent exercise the unfortunate ones condemned to this art had to engage in
condemned to this art. Feet and hands were not too much at the same time, - hands for the high bells, feet for the low bells. The keys were large pegs, which the play of the muscles, in all its development, was barely sufficient to bring to percussion.

In the old Flanders chimes, which were equipped with mechanical devices, it took considerable expense and time to change the pointing of the cylinder, so that the good Flemings got used to hearing the same tune for several years on their complicated chimes. This has not helped to turn their mood towards appeasement and resignation. I therefore propose to the Academy I Ghent, the former revolutionary city, to put the following question to the competition: "What has been the influence of carillons on the public spirit in Flanders? "

If this question had been cleared up academically, the difficulty I found in explaining the carillon at the Champ de Mars would have been partly overcome for me.

This carillon was commissioned for the cathedral in Buffalo, USA. I assume that the funds were raised by public subscription. Only the subscription of all can impose an enjoyment or an easement, common to all.

We congratulate the city of Buffalo, famous for its salted meats, on its municipal taste for bell music, all the more sincerely because it provides us with one more export article.

If the Parisians regain their taste for carillons, they need only re-establish that of the Samaritaine, according to the new system.