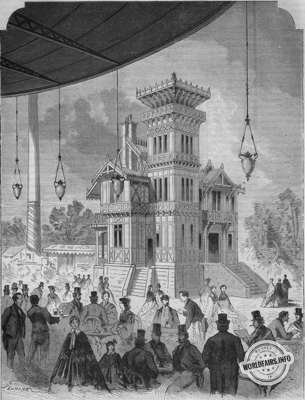 Will he ever live in it, M. le Play, this finely constructed and cut chalet that the Imperial Commission has placed at his disposal? I doubt it, for my part, although the house is very attractive. M. Do you think that it was easy to satisfy nearly 43,000 exhibitors, not counting the foreign commissioners and our proud French journalists, two unmanageable types of people, to say the least, and with no other intention than to highlight the patient zeal and good offices of M. Le Play's coadjutors? Le Play? Let us say, to conclude, that M. le Commissaire général was able to run this immense machinery of the Universal Exhibition of 1867 with less than forty employees. Yes, that is the entire staff of this general who commanded the greatest industrial army that we have ever seen, and that we shall ever see.

For my part, I have neither to praise nor to complain about 31. le Play, but he will always find in me a man who will do him justice, because in all circumstances I have found him to be fair, which always commands esteem, if not sympathy.

It is therefore likely that the Commissioner General's cottage will be visited more than inhabited. It will be visited, in any case; it is worth the trouble, if only as resolved difficulties of mechanical work applied to constructions.

This time, the carpentry contractors, Messrs Huret and Sons, were both carpenters and architects. The principle of the construction is wood, to which the concretes of Messrs. Coignet served as an imbrication. Imagine that, in order to make the framework of the building, whole trees were transported, just as they came out of the forest, and which were successively delivered to the machines, gears, circular and endless saws, routers, planing, mortising, cutting machines, and so on, so that, without having to resort to the hand of man, a construction was built that could be assembled and dismantled at will.

What is the point of describing this chalet? Everyone can see it, and our drawing shows it. The main body, with two floors, is built on a base. At one of the corners stands a four-storey campanile serving as an observatory. The ground floor of this belfry communicates with the various parts of the building.

The first floor of the main body is occupied by a large nave-like room, which is supposed to have been used for the meetings of the Imperial Commission, if I may judge from the large table with green carpet which is there. All the rooms, as well as the great hall, are commanded by vestibules and galleries serving as accesses.

These arrangements, as simple as they are convenient, give the whole building an original and pleasing appearance.

The belfry, with the gable of the main face, has a very special layout. In the upper part of the gable is a large window which illuminates the first floor lounge over its entire width. The roof is corbelled over the bay.

A mechanical sawmill, powered by two fifty horsepower steam engines and a staff of five hundred workers, enable Messrs. Huret and Sons to build dwellings in the style of the Commissioner General's cottage, under conditions of speed and economy that had not been approached before.

For the interior fittings, decoration and furnishings, Messrs. Huret et fils had numerous collaborators whom we will have occasion to mention later in the review of the classes.