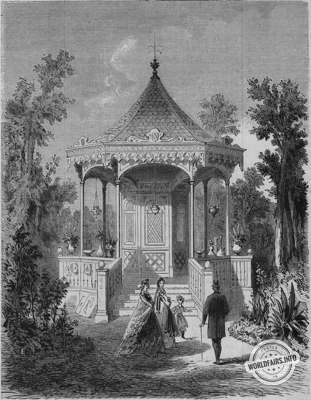 It was the Chinese who first applied cut wood to the decoration of buildings. They were imitated by the Russians, and without knowing the work of either of them, the Swiss peasants have innovated in this kind of decoration. In France, where it has been imported for some years, it has produced remarkable works; but nothing, we believe, more elegant than the kiosk of which we give a faithful reproduction.

This kiosk is octagonal, of Moorish architecture, raised on a platform to which one ascends by a staircase of several steps, and surrounded by a covered portico, 1 metre 20 centimetres wide, supported by slender columns. It looks like one of those pavilions which abound in oriental landscapes, and of which Arab tales speak so much.

The roof, made of stamped zinc, was supplied by M. Gugnon. The blinds and chains are of iron. The rest of the kiosk, which has a diameter of 6 metres 50 centimetres, or 42 square metres of surface area, is built entirely of oak, fir and poplar wood. It is a work of artistic carpentry and has the advantage that it can be dismantled, reassembled, moved and replaced without any difficulty. Using special procedures, the author cuts the wood, hollows it out, traces arabesques on it, and decorates it with the most varied designs and the most delicate serrations. The kiosks he creates are eminently suitable for parks, in perspective at the end of an alley, especially if vases of flowers are placed on the balustrade of the verandah.

Placed at a short distance from the great waterfall, whose rustle can be heard, surrounded by rare plants and shade, the kiosk we are dealing with produces the most graceful effect.

Mr. Paris' speciality is to enamel metals, to coat them with an adherent and well glazed flux, to preserve them from oxidation. He then applies colours to them by a process of his own, and thus obtains solid, durable, inexpensive imitation earthenware, on which the sun, humidity and frost have no effect.

On display in the kiosk is a red lined bowl with a foot and two handles welded to it. What goes into the composition of this object of art? A certain combination of colours, and rice paste combined with transparent glass.

Nearby is a suspension made of green rice paste, lined with enamel on the inside, with a cut glass knob.

We also notice a lighting ball of a particular opaline composition, intended to replace the frosted glass globes. The light that passes through this ball is subdued, so to speak, and is distributed over the entire surface. The central focus disappears, which will make the globes that Mr. E. Paris has described as enamel globes valuable for electric lighting. They have already been adopted for the squares and squares of the capital on the recommendation of Mr. Alphand.

Next to the perron of the kiosk are the duplicates of the mosaics and enamels that Mr. Paris executed, on Visconti's cartoons, for the tomb of Napoleon I.

It was M. Paris, père, who, in 1844, first exhibited enamels on sheet metal; he had fashioned them into jewels, but since that time, his son has found innumerable and curious applications for them; street signs and house numbers, pipes, lining plates for battleships, etc. The main chimney of the Mazas prison is made of enamelled sheet metal. The factory of Mr. Paris supplied the enamel for 180,000 metres of riveted sheet metal pipes, laid in Lisbon in 1850 for the gas company. The pipes of the Louvre Palace, the reflectors of the Châtelet and Gaîté theatres, are made of enamelled sheet metal.

A third industry still occupies the Millet kiosk. Messrs Langenbagen and Hepp of Strasbourg have installed a miniature factory of panamas, whale hats and palm bark inside. This small salon is 3 metres by 3 metres, entered through two doors, and lit by six cross windows decorated with coloured stained glass, engraved or muslin, executed by Mr. Grados.

It should be noted that these charming constructions, although having all the desirable luxury and comfort, could be delivered at a relatively modest price.