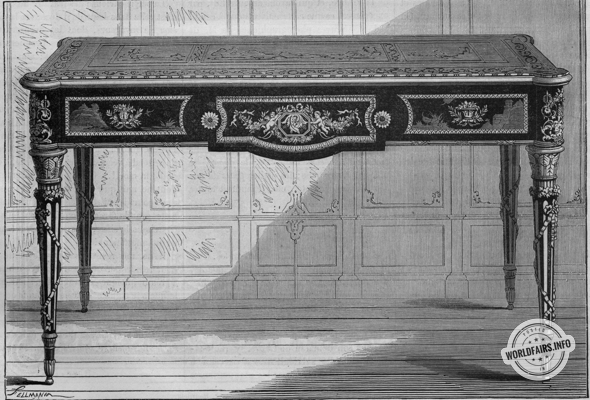 Beurdeley furniture.
Alongside the artists who question their own genius and ask it for a new form, a new style, which are the characterisation of their time, we must place those other artists whose taste and knowledge of ancient styles constitute their main merit, and who know admirably how to reproduce in all its purity the spirit of the conceptions of the great extinct centuries.

The cult of beauty recruits its priests everywhere, and if the first are the poets of art, the others are its historians. These two branches of human work, far from excluding each other, complement each other; before creating, one must know; has not history always been the fertile inspiration of our most admired masterpieces?

Following this logical progression, we must begin our review of the works exhibited in this iron palace, which takes us back to the golden age, by examining the conscientious workers who are willing to become art historians in the field of cabinetmaking.

Among them, the one who is entitled to the first rank is without doubt Mr. Beurdeley.

Gifted with an exquisite taste, penetrated with the science of styles to an extremely remarkable degree, M. Beurdeley offers us today, among several masterpieces, an oak bookcase composed in the Louis XVI style; a table inlaid with mother-of-pearl and silver, Louis XVI style, and finally a group cast in bronze after an original terracotta by Pigalle; these three main pieces of M. Beurdeley's exhibition are interpreted in our engravings in a very refined way by our skilful draughtsman M. Fellmann.

It would seem, from the list of salient objects whose drawings we reproduce, that M. Beurdeley has a special cult for the Louis XVI style.
This remark does not in any way imply a reproach; but it leads us quite naturally to direct our attention to the way in which the artists of that century understood ornamentation.

The majestic splendours of the century of Louis XIV had already been influenced by the refinement and lightness that characterised the century of Louis XV. The rocaille had reigned supreme; degenerate Italian art had provided all that it contained of mannered and refined in its creations. Finally, the last years of the reign of Louis XV arrived and were soon marked by a very energetic movement of reaction against the taste for rocailles.

At this time of transition, a double current seemed to draw artists, sometimes towards the study of the old French masters, sometimes, according to the degree of patience which animated the workers, towards a kind of new interpretation of the monuments of antiquity.

It is from this twofold movement that what is known as the Louis XVI style emerged.

The abuse of rocaille had thus brought interior decoration back to simpler and at the same time more rational data. The straight line was once again given pride of place. The sobriety of the ornamentation inaugurated a calmer and at the same time softer style. Instead of these bristling and tormented silhouettes, the furniture presented a more serious and purer design; but luxury, which never loses its rights, combined with the trend we have mentioned towards the imitation of the old artists, Boule among others, brought back the taste for inlays and ornaments of bronze, gold and silver applied to the panels of the furniture of this period.

As the years rushed by towards the cataclysm of 1989, artists seemed to obey the impression that events engraved in their minds; so sobriety degenerated imperceptibly into nudity and prepared the styles of the Republic, of which it is best not to speak.

But we can feel very well, from the last years of the reign of Louis XVI, a coldness emerging in the artistic inspirations, and we are perfectly capable today of distinguishing a piece of furniture from the ascending period from one from the period of decadence of the style we are dealing with.

Let us leave aside the last period. The furniture that Mr. Beurdeley exhibits belongs to the great movement of the last century, and offers us in all its purity the genius of the style at its best moment.

A defect which was common enough to the artists of this period was to treat the details of their composition as vignettes for book illustrations.

In his large library, M. Beurdeley has avoided this monotonous drawback.

Divided into three ebony veneered bodies, this bookcase is surmounted by a pediment which completes its general appearance with perfect harmony. The bronzes of the panels whose waxes we have seen are of marvellous finesse. None of the four panels are alike, the symmetry does not suffer and the decoration gains in unexpectedness and richness.

The lower body is decorated with fine arabesques of a very firm design. The chiselling is admirable, the gilded bronzes with their badly worn finish highlight the browned matte of the gilding by a happy opposition of tones. Here and there we also notice inlays of precious materials such as jasper and lapis; Finally, we must note that we have never seen since the piece of furniture in the Musée des Souverains (in the Louvre), which belonged to Queen Marie-Antoinette, a work of such importance, and whose style was more reminiscent of that charming period when Riesner set the tone for the marquetry, and Goutière for the chasing, but all of which bore witness to an opulence that was about to disappear and was casting its last ray into space.

Next to this remarkable bookcase, M. Beurdeley offers us a table, the top of which is shown here.

This piece of furniture is more especially the triumph of marquetry and inlay in the same Louis XVI style.

The composition of the top consists of arabesque friezes mixed with burgot, mother of pearl and silver.

In the middle are panels in old Japanese lacquer; all the friezes on the belt are in old lacquer. The legs, in the form of quivers, are inlaid with mother-of-pearl tigettes, decorated with very delicate bronzes and chiselled with infinite art. Beurdeley is the favourite of the crowned heads; for what other than kings and princes of finance could have the means of satisfying the delicate inclinations of their refined taste when they address themselves to a man such as M. Beurdeley, who buries truly frightening sums in the conscientious execution of his works.

It remains for us to study one last subject of engraving which completes the most salient objects of the exhibition of the erudite artist with whom we are concerned: it is the chiselled bronze group representing three children fighting for a hen. The execution is irreproachable; it is from an original terracotta by the sculptor Pigalle and which is the property of M. Beurdeley, that this group has been cast and chased. The subject takes us back to the heyday of Watteau's sheepfolds. Pigalle, who lived at the end of the reign of Louis XV, had preserved the gentle and graceful tendencies which a long peace had given rise to and which the spirit of gallantry helped to perpetuate.

These are the main subjects of Mr. Beurdeley's work. We will also mention some vases in red oriental porphyry mounted in the Louis XVI style, which are rare and precious objects; a small showcase recently brought in which contains real chiselled jewels executed by M. Duron on the basis of data from M. Beurdeley. But we will have the opportunity to come back to this subject for Mr. Duron, whose merit we have known for a long time.

Let us content ourselves with concluding this study by congratulating ourselves on having in France a man of such pure and enlightened taste as M. Beurdeley; his in-depth knowledge protects amateurs and collectors from those errors so regrettable in archaeology and which result in fabulous sums being wrongly spent on an object that is not at all what it seems to be. What our learned collector gives us is conscientiously designated, and his word is worth a civil status record.

It is unfortunate to be obliged to praise in our time a quality which should be general; but how can we not excuse our poor century when we see, as Phaedrus reveals in one of his apologues, that the ancients manufactured false antiquities, and that the artists of his time had no qualms about adding to their marble statues the name of Praxiteles, and to those of silver that of Myron!