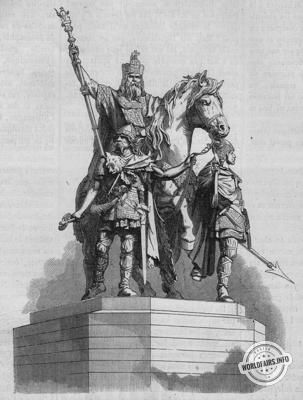 If you enter the Palais de l'Exposition Universelle through the Porte La Bourdonnaye or the Porte Rapp, two equestrian statues, truly monumental and grandiose, immediately catch your eye.
On the left is Don Pedro I, Emperor of Brazil; on the right is the Emperor and King Charlemagne.

These two beautiful statues are the work of M. Louis Rochet.

We will speak here only of Charlemagne, who is represented with the diadem on his forehead, the sceptre in his hand and in all the splendour of the imperial costume. This is how he must have appeared to the ambassadors of the Eastern emperor Nicephorus, when, dazzled by so much splendour and seized with fear, they prostrated themselves before him.

With hair like a Merovingian, with a long and venerable beard and serene and deep eyes, Charlemagne mixes to his male and warlike expression I don't know; what pensive majesty, which still ennobles it and enhances it. One guesses the man who, having founded a great Empire, is preoccupied, however confidently in the present, with the events of the future.

The steed, magnificently embarnished, stands up and advances with a proud gait. It is an illustrious beast worthy of the rider. At the two sides of the monarch and with their hands resting on one of the straps of the bridle, two warriors, two paladins, Roland, it is said, and Ogier the Dane, accompany the powerful monarch on foot.

One carries the double Frankish axe and the long sword; the other is armed with the Gallic pike and dagger. In their different and very well marked types, the attentive observer believes to recognize the double race from which the French people came: this one comes from the north, it is the German; that one, of a less martial aspect and finer, comes from the south, it is the Gaul. Already, as early as Charlemagne, they came together and melted in the mysterious melting pot from which our precious and indestructible national unity sprang.

The effect of this colossal group is most impressive. Something so large and so complete was needed, and the sculptor felt it marvellously, to meet the idea we have of this sovereign glory of Charlemagne, of Him who, after defeating or destroying the Saxons and the Lombards, the Saracens of Spain and the Avars, had established his vast dominion from the Baltic to the Ebro and from the Atlantic Ocean to the Krapak Mountains.

Since the Roman world, the sun has not shone on anything greater.

That is why Charlemagne lacks nothing, he is the epic hero par excellence. He embraces reality and illusion, history and legend. All geniuses and all languages have acclaimed him. He lives on in the poems of Germany and England, Italy and Spain. He has been celebrated in Flemish and Basque. He has thus collected the first flower of all our modern poems, and in our French history he appears from afar as an Orient, as the luminous portal from which the whole monarchy will emerge, that long succession through the ages of various masters and kings. He remains the true patriarch of the power of royalty.

His work and his genius astonish; but, beautiful and rare adventure! the glory of Charlemagne has nothing threatening or fierce. It seems that it was imposed as a right and a duty and that the immense conquest was a benefit for all. It was the shining sword of civilisation, which only subdues the masses in order to enlighten them and only groups them into armies in order to leave them united as peoples.

Charlemagne was therefore a true king, in the highest meaning of the word. The conqueror in him doubled as a legislator, and, in a half-barbaric century, he encouraged the arts and protected the sciences. He willingly surrounded himself with scholars and great minds, and did not think that he would fall into the trap of applying himself to the works of intelligence and taste.

He was a good man, as great men almost always are, and if he was sober and very tidy in the management of his household affairs and in his personal expenses, he knew, when necessary, how to display all the brilliance necessary for a sovereign and not to haggle over his support for serious and modest merit.
But, as it is difficult to touch Charlemagne without touching at the same time the romances of chivalry or the naïve traditions which his reign sowed in a way in the minds and which he made flourish there, let me remind you of the graceful story of Emma, the natural daughter of the great emperor, and of Eginhard his secretary.

Emma was very beautiful, and Eginhard also fell in love with her. After months of cruel silence for the two lovers, the girl agreed to hear the young man's confession and admitted him one evening to the turret she lived in, at one of the corners of the castle.

Eginhard's passion was ardent. But while he was expressing it effusively, the snow was falling outside.

At last he wanted to withdraw. How could he do so? He had to cross a large courtyard, and the tracks of his feet, marked in the snow, would not fail to reveal the sweet secret to Charlemagne's discerning eyes. Emma offered to carry her lover on her shoulders, and fear made Éginhard consent.

The emperor, who, by a peculiar effect of Providence," says the chronicle, "had spent the whole night without sleep, rose early in the morning and, looking out of the window, saw his daughter weighed down by her dear burden. He was touched with admiration and, at the same time, moved with grief; but he took the decision not to show it. "

He was somewhat worried about the consequences of his intrigue and later wanted to withdraw. The king then summoned him before his Council and told the story himself. Some of the councillors were in favour of an exemplary punishment, others for a milder one. In short, the king's wisdom was deferred to.

I give you for a wife," said the good King Charlemagne to Eginhard, "that kindly carrier who loaded you so benignly on her back. "

And taking the blushing young woman by the hand, he himself handed her over to his happy secretary.

Emma was richly endowed - she was both a tender and a strong woman, the bad jokers will say. As for me, I find this story or tale, as one may call it, which Jacob Cats, the great Dutch pensioner, once adorned with beautiful Flemish verses, as touching as it is ingenious, and that it will never harm that immortal reputation of justice and goodness which accompanies, down the centuries, the glorious memory of Charlemagne.