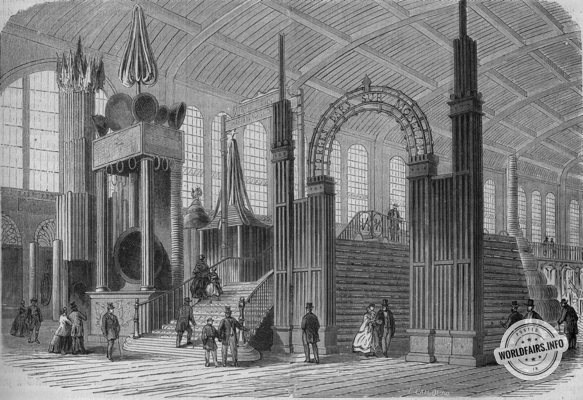 They have the charm of strength combined with grace. On the right, iron, on the left red copper and brass.

On the latter side are two monuments erected by the houses of Laveissière and Letrange.

The latter built the building closest to the staircase. It is a temple with four columns, a dome and a base.

The columns are welded copper pipes connected in a bundle. The pediment is a large piece of copper boilerwork. In the middle of the base, copper nails, placed in a field, draw an eagle with spread wings, and up to the lightning which it holds in its claws. Here and there, as ornaments, are nails of different substances distributed on this base: slate nails, lining nails, boarding nails, rivet nails, melted nails and mechanically made nails. Between the columns lies a red copper vat, which is 2.750 metres in diameter, 1.250 metres deep, 7 millimetres thick and weighs 670 kilograms. Ribbons of steel, copper and zinc adorn the pediment with their festoons. Finally, in front of the building lies a roll of rolled lead, made up of a sheet 2.90 m wide, 20.20 m long and weighing 3,125 kilograms.

The building of Messrs Laveissière is a sort of pyramid with a square base formed by the superposition of parallelepipeds of increasingly smaller width, which, surmounted by the pavilions of all the countries which use the products of this house, almost touch the vault of this gallery.

These parallelepipeds are, like Mr. Letrange's columns, made up of an assembly of copper pipes, but here the pipes are seamless; they have been stretched.

Around this main building, various samples, artfully grouped, allow us to appreciate the qualities of this type of pipe. One of them, which weighs 120 kilograms, is 4™,55 long, 307 millimetres wide and 2 millimetres thick. We see some that have been, this one flattened, this one bent, this other split, all cold and by the hydraulic press; the effort required to deform or break them is considerable. To split one, a pressure of 250,000 kilograms was required; 50,000 kilograms more were needed to bend the other. There are some of considerable diameter and thickness that have been knotted like a rope, without causing any cracks. There are also lead pipes with five inner pipes and magnificent reinforced tube plates for locomotives.

Behind this double exhibition is that of MM. Estivant frères, mainly composed of hammered tubes without soldering, and which, in all respects, compares favourably with those which have just occupied us.

To the right of the staircase, and forming a counterpart to the temple and pyramid of Messrs Estivant and Laveissière, is a sort of triumphal arch, built by the forges of Ars-sur-Moselle, and made entirely of special irons. Behind this door, along the wall of the gallery, stands the exhibition of the Compagnie des forges de la Franche-Comté, which is quite an altar; in the middle stands a sheet metal plate 6.55 metres high, 2 metres wide and weighing 1200 kilograms. On each side, special irons are placed upright. In front of these, bundles of steel wire and coils of windchest springs simulate chandeliers. Porcelain telegraph wire holders, broken cast iron samples to show their shiny grain; pretty twisted and tinned irons, intended to provide pendulums for clocks; galvanised wires, a huge assortment of nails of all kinds decorate the construction, flanked by large blocks of ore and over which run garlands of wire and iron chains.