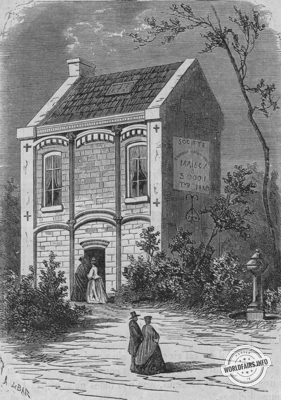 To M. Ducuing, editor of the Exposition UNIVERSELLE ILLUSTRÉE DE 1867.


My dear friend,
I hardly have time to write a letter; but since it is a question of workers' housing, I cannot resist your appeal.

It is now twenty years since a book by M. Villermé, entitled Tableau de l'état physique et moral des ouvriers, fell into my hands. I had read many dissertations and heard many ramblings on what was then called the workers' question; but I understood from the very first pages that I was dealing with a man who, instead of theorising about the workers, had gone to see them in their homes and in their workshops; who knew how long they worked, under what conditions and for what wages; where they ate their meals, how much they paid for them; what they were able to afford to spend on their rent, their clothing, and the upkeep and education of their families. He had visited attics, cellars, garrisons and cabarets; and he also knew terrible secrets about the average life and the probable life, for his book ends with mortality tables which summarise all the lessons.

I did not know M. Villermé; but I can say that I set out in his wake to make my Tour de France; and, as appetite comes with eating, I pushed my excursions from Prussia to the end of Lancashire, passing through Holland. What I have learnt by many years of reflection and observation is that all social reform must be first and foremost a moral reform; that morality has no more powerful auxiliary than family life (has it any other?), and that family life is the most important factor in the development of a society. ), and that family life is almost impossible in a dwelling where one can neither work, nor breathe, nor see each other, nor separate, and where one verifies every minute the truth of this axiom of J. J. Rousseau: that man's breath is deadly to his fellow man.

There is no longer any question of repeating the so sadly accurate descriptions of M. Villermé, nor those of M. Buret, nor those of M. Blanqui, the economist, who had the cellars of Lille closed and filled in, nor those of M. Louis Reybaud and M. Audiganne, nor mine. Everyone is convinced and everyone is working. There are houses of recent construction which are almost as famous as the attics of Rouen, the cellars of Lille, the courtyards of Roubaix, Amiens and Saint-Quentin. However, let me once again recall the cities of Mulhouse and the names of Messrs Jean Dollfus, Schwartz-Huguenin, Zuber, Penot, Bernard, Muller. I would like to mention all those who built these beautiful houses, of which you can see a specimen at the Universal Exhibition, next to ours. I remember that after studying the Mulhouse system, I undertook to summarise it in these two propositions, whose complete accuracy I maintain.

As for ours, they will neither be sold nor bought, since we are a cooperative society. I hope that one day we will sell houses, because it is not forbidden for a cooperative society to sell to third parties; but at the moment we are thinking mainly of building houses for ourselves. For 2 francs a week, we will manage in time to be at home, and to have no more terms to pay; and thanks to our architect, Mr. Stanislas Ferrand, who has reduced the expense to three thousand francs for Paris, and made the best possible use of a necessarily restricted space, we will really not be out of place, and we will not be long in being freed from the fee of 2 francs a week, and from any fee.

M. Ferrand substitutes brick for stone, which gives him the means of making hollow walls, and of enveloping the house in all seasons with an average temperature of 13 degrees.

He had the entire weight of the floors and attics carried by four hollow cast iron columns, which received the rainwater and discharged it into cast iron gargoyles, which carried it away from the house. He thus saves money, since his brick walls cost 4 fr. 10 c. per superficial meter, while the rubble wall costs 12 fr.; and space (which is still saving money), since his wall occupies 0,13 on the ground and the rubble walls 0,50.

We have, for our three thousand francs, on the ground floor, a single room taking our on the two frontages, with a vestibule, which can if necessary be transformed into kitchen; the floor is composed of two bedrooms independent one from the other and separated by a muffled partition in hollow bricks. The two beds are 3.5 metres apart. Above this is the attic, which could, with a little goodwill, be called the boys' room. The house is equipped with all the necessary facilities, cellar, sink, ventilators, etc. It occupies an area of 25 m. It occupies an area of 25 m. 25 cent; the total surface of the interior accommodation is 43.05 c., the air cube is 177 m. 489.

All this is not sumptuous, as you can easily guess; but it is cheerful, comfortable and healthy. The nest, in short, is rather narrow; but one understands, without too much effort of imagination, that one can place happiness there. If you only take the trouble to reread a few pages of M. Villermé before entering our house, you will be tempted to take M. Stanislas Ferrand's little house for a palace; and if you are, as I believe, a philosopher and a democrat, you will perhaps go so far as to say:
Hoc eratin votis....

If this is so, my dear friend, I take it upon myself to tell you, without consulting my colleagues and associates, that our lists are not closed.