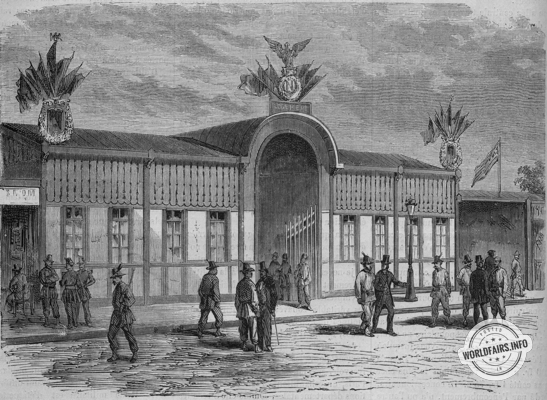 The francs-tireurs of the Vosges were received, as we have said, in the lodgings which the Commission d'encouragement had built in Avenue Rapp, at the front door of the Exhibition, to give hospitality to the workers delegated from the departments. These
These lodgings, which contain 625 beds, were built on a piece of land graciously conceded by the city of Pari" to the Commission d'encouragement pour les études des ouvriers, and which the latter will not soon return to the city, I hope, by having a good use for it, even after the close of the Exposition.

The buildings, of which our drawing on the last page represents the exterior façade, are divided into two- and four-bed rooms. Generally, workers coming in troops prefer the four-bed rooms: the two-bed rooms are reserved for households.

A central alley crosses the four parallel rows of barracks, which are separated by sanded paths. The gaps between the doors are lined with sods of earth, which are already covered with grass and where flowers will soon grow. All this is clean, and almost coquettish. Water and gas are provided everywhere. Next to each bed is a water pot, a basin and a chair. Of course, the linen is changed every time the bed changes guests.

The proof that the Encouragement Commission exercises international hospitality liberally is that 112 beds are reserved for English workers from the beginning to the end of the Exhibition. In this district, the windows were already fitted with curtains.

In addition to the accommodation on Avenue Rapp, the Incentive Commission, through an agreement with the Military Beds, has secured the provision of 5,000 bunks, which will not be enough, if this continues.

Do you remember the Omnibus restaurant, which the Commission d'encouragement had built on the Champ de Mars, opposite the École militaire? It was said, when I mentioned it, that this great popular buffet would never be filled. Well, do you know how high its daily takings were? Up to 10,500 fr. with meals, the most expensive of which did not cost 1 fr. 75 c. The concessionaire, overwhelmed by the overcrowding, was only able the other day to get out of the predicament by displaying on his doors, as on an omnibus, the word: Full. Laughter disarmed the discontent. It was about time; and it had to be in France, where jokes are quickly seized upon and always succeed.

So, the Commission d'encouragement did for housing what it had done for cheap food, here as there, one will have to say often: Complet, during the months which follow. But the Commission did its best to stagger the arrivals.

By dint of persistence and tenacity, it obtained from the railway companies a 50 per cent reduction for department delegates travelling outside the pleasure trains. It could not obtain anything from the Imperial Commission, that other power, beyond a subscription of 4000 francs.

Our respectable and dear president, M. Devinck, can say whether we, his devoted collaborators, have spared ourselves the trouble. And to what hard work this cruel man, tireless in his efforts to do good, and whose generous ardour no work can quell, has subjected us - who will know if we do not complain?

And you will see that he will do so much that we will not give back to the city of Paris the land it has granted us, and which we will keep, won't we, Mr. Devinck, if we still find some good to do.

Think about it! We have to amortize the costs of the establishment during the period of the Exhibition, and consequently charge 1 franc 25 centimes per bed, when we could, without these cursed costs, give for 40 centimes an accommodation that one could not find elsewhere for 2 francs.

Here, then, is our role all mapped out after the Exhibition. We will give accommodation for 40 centimes, perhaps for less. And you will see that M. Devinck will not leave the Prefect of the Seine alone until he has agreed to renew the free lease of his land.
I leave it to you to think whether Mr. Devinck will, in this case, show mercy to his collaborators?

We shall, my goodness! compete with the Emperor who sponsors workers' houses; and we shall see how far this irreverent emulation will go.

And the question of workers' delegations, in which we still have to follow our insatiable president! I would gladly talk about it, if I were not afraid of touching politics in any way other than in banter. But nothing will prevent me from saying that our workers are the true zouaves of industry; undisciplined when their boss is bad; devoted when he is good.

I would like the Commission for the encouragement of workers' studies to be able to receive, while the foreigners are in Paris, a sample of all our departmental populations, as it received the Francs tireurs of the Vosges. It seems to me that this would not look bad, even in the eyes of the Prussians. What does M. Devinck and the departmental committees think? There would be a certain amount of additional revenue for the Imperial Commission.