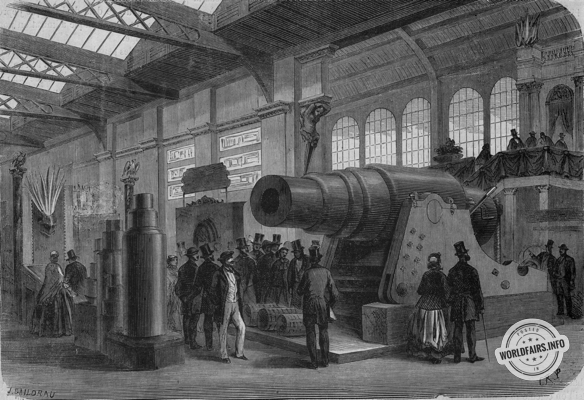 Among the products exhibited by the Essen steelworks, belonging to Mr. Krupp, the monster gun represented in our drawing is undoubtedly one of the most curious, and justifies by its weight and its enormous mass the astonishment of the crowd.

This rifled molten steel gun, loaded by the breech with a closing device of the Krupp system, is placed on a molten steel carriage weighing 15,000 kilograms, which must itself rest on a revolving frame weighing 25,000 kilograms (the cramped conditions of the carriage). (the smallness of the site did not allow it to be displayed). It weighs, with the steel frets which surround it in double and triple layers, at the chamber and at the muzzle, 50 000 kilog. The gun itself was forged by a steam hammer weighing 50 tons from a 42,500 kilogram ingot of molten steel. After forging, drilling and turning, the piece was reduced to 2,000 kilograms. The weight of the forged steel hoops added to strengthen me, being 30,000 kilograms, the whole is 50,000 kilograms.

Ingenious mechanisms make the manoeuvre easy with the help of only one or two gunners who are sufficient, according to the manufacturer, to give the direction, elevation and inclination with enough speed to pursue a ship passing by with full steam even at very short range.

It took sixteen months to manufacture this giant which costs 391750 francs alone and with the carriage and frame 543750 francs, and of which each shot, if one calculates the capital employed and the price of the charge and the projectiles, comes to nearly four thousand francs.

The railway companies did not have a wagon strong enough to take it to Paris, and a special iron and steel carriage had to be built, carried on twelve wheels and weighing 23200 kilograms.

From the point of view of industrial manufacture and of the difficulty overcome, the monster gun of Mr. Krupp, in spite of the objections which it raises, is a remarkable work of which we will speak again by examining the new artillery of large calibre exhibited by France and by England, and by giving an account of the various systems proposed and adopted during these last years.

What does a gun, however large it may be, prove? If it is the merit and the power of manufacture, it is to be deplored that this merit and this power are not applied to better uses. An exhibition of cannons might have had some appearance of timeliness at the beginning of the Exposition; today, with the king of Prussia himself honouring us with his welcome visit, these exhibitions have lost all topical interest.

Cannons and bells have been lavished everywhere on the Champ de Mars, in the foreign sections. Since it is agreed that the latter should be silent, it would be well to impose silence on the former as well.

It should be noted that the countries which exhibit the largest cannons also exhibit the largest bells; I do not seek to explain the causes of this analogy. So much so, that the sound of bells and cannons is only bearable from a great distance; and I conclude that they should have been kept at a distance.

If the various exhibiting countries wanted to prove, by the display of their respective destructive devices, that they are capable of waging war, I would have liked this to be so obvious that war would henceforth become impossible in the face of equal destructive power. Who will exhibit a weapon or a fulminate perfect enough to defeat an army of three hundred thousand men in a quarter of an hour? It seems to me that on that day men would look for another way than war to come to an agreement.

From this point of view, neither the Krupp cannon, nor even the needle gun, deserve the great prize. But we owe them an honourable mention, especially the needle gun, which has proved to us that the genius of the commander is no longer necessary to achieve great victories.

And we too have guns, and just as big as the Krupp gun. Have we exposed them? It was a very close call, to be sure, but we did not expose them.

Imagine that the Admiralty had planned to erect a trophy of cannons at the entrance to the Exhibition, just as majestic as the Prussian cannon. They would have taken the biggest guns in the fleet and erected them in the form of columns, with a base of gun carriages and pyramids of cannonballs all around. It would have been a truly imposing trophy, especially arranged with the taste that we put into everything, without flattering ourselves.

Well, the Imperial Commission found some inconveniences in allowing such an artistic trophy to be built at the Champ de Mars gate. It thought, not without reason, that such objects, displayed in the middle of a peaceful exhibition, would provoke guilty thoughts.

She was well rewarded for her discretion! If there were a grand prize to be awarded to cannons, we alone would not compete. Is this fair?