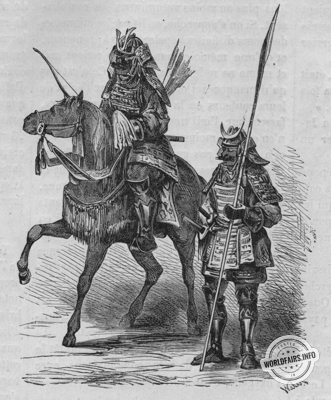 Why did you place this immobile and terrible-looking sentry in the gallery of machines?

Is it spring-loaded? Does it move? Will it draw from its arsenal of winged arrows and aim its bow at the indiscreet visitor?

I find it hard to believe that the warrior in the flesh, whose physiognomy this mannequin, which is very well done by the way, represents, can himself move at ease under his heavy armour and his innumerable embroideries. Obviously, it is not with these soldiers that the Taïcoum would rout our Zouaves and our chasseurs of Vincennes.

Nevertheless, this specimen of the Japanese army is as curious to study as its presence is unexpected in these peaceful parts of the Universal Exhibition.

We have been shown here a soldier of the higher ranks. The rider and his foot soldier sidekick belong to the aristocracy of the army if I am to believe the cuirass, the chain mail, the helmet decorated with the crescent surmounted by a small symbolic animal which seems to want to rush before its master on the enemy.

This ornament reminds me involuntarily of the famous cat of the Zouave who never abandoned him in the middle of the fighting and meowed in concert with the terrible rifle of his master.

Japanese soldiers have no uniforms; the officers dress according to their fortune and taste.

Every Japanese wears a three-foot sword on his belt, slightly curved and with a very wide back. This is understandable among a people who are accustomed to open their bellies for a yes or a no.

The distinctive sign of the noble classes and the military is to have two swords which they arrange on the same side of the belt. The Japanese, who seem to me to be somewhat like the Gascons of Asia, claim that with a blade of choice one could split a man in two from head to foot.

The warriors we see, one armed with a bow and the other with a long, broad-bladed pike, have their faces covered with a black mask, grimacing in a terrible manner.

The place of the mouth has a gaping hole armed with a black moustache, very nicely bristling. Doesn't the hair stand up in fear as well as in anger! It seems that the ancients were accustomed to inspire fear in their enemies rather by the horror of the warlike apparatus than by the use of their own courage.

The Roman infantry," says Machiavelli, "were adorned with plumes which gave them both a more imposing and more terrible appearance. "
The hole representing the mouth of the Japanese is contracted as if to utter a war cry.

The organisation of the Japanese army is more or less the same as that of all known armies: five soldiers have one man in command, which makes the famous distinction of four men and a corporal in Japan inaccurate.

This commander is called the rice commissioner, because it is he who fetches the rations from the public shops. As for the pay, it is almost always paid in kind.

The profession of arms has always been honoured in all nations. The Japanese hold it in special esteem. When a common man speaks to a soldier, he calls him sama (lord or gentleman), and shows him great respect.

These courtesies and the gold embroidery of the costumes often contributed to mislead travellers into the most singular misunderstandings, and they willingly recommended themselves to the soldiers in charge of their guard as to imperial dignitaries, - which must have flattered them infinitely.

Such is the influence of costume, an influence as true in Japan as in France, and which inspired these lovely verses of Sedaine:
O my suit, how I thank you:
How much I was worth yesterday, thanks to your value!

But the Japanese are not obliged to know Sedaine.