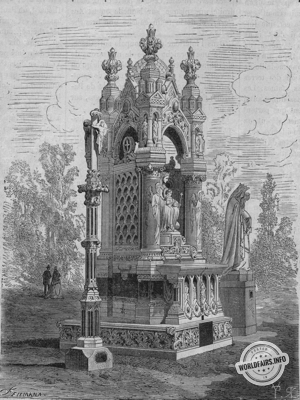 In the midst of the picturesque and varied constructions which abound in the French quarter of the Park, there is one remarkable, if not by its dimensions, at least by its originality: it is a monument whose base, walls, ridge, statues, ornaments, are made exclusively of enamelled terra cotta.

You know, at least from engravings, the pardons, the sculpted calvaries, which rise here and there at the crossroads of the Armorican roads; you have seen, in the apses, elaborate altars, in the centre of which the image of Our Lady appears under a canopy, surrounded by a rich decoration. The ceramic monument comes from both sides; it could embellish the chevet of the most beautiful temples, or indicate in the open field, as did in the past the small buildings called Joy-mounts, the stations of some pious pilgrimage.

It is several centuries since pottery covered with a tin glaze and painted with vitrifiable colours was applied to the exterior ornamentation of monuments, to which their indefinite duration and inalterability make them so suitable. They can be seen on the façades of the churches of Saint Martin in Pisa, Saint Mary in Ancona, Saint Francis in Bologna and Saint Peter in the Golden Sky in Pavia. Luca Delia Roblia's enamelled clay bas-reliefs are justly famous, and all historians agree in speaking enthusiastically of the castle in Madrid (Bois de Boulogne), whose façade his son Girolamo Delia Roblia had decorated, and which the Parisians called the faience castle.

However, it is only in our time that people have undertaken to make monuments of a certain importance in glazed and painted terracotta. The authors of the one we are dealing with, MM. Virebent frères, of Toulouse, exhibited a Roman portico in 1855, which earned them a first class medal in the section of terracotta for ornamentation and statues. The dimensions of this portico, which was as hard and as solid as stone, proved that wherever natural stone was lacking, it could be replaced under the best conditions, as Mr. Charles de Bronckère, the rapporteur of the international jury for the eighteenth class, stated. Mr. Gourlier, the rapporteur of the fourteenth class, said: "MM. Virebent frères, of Toulouse, have been busy substituting moulding for cutting; their establishment has successively received great developments, and they have particularly applied the products, either to the Limitation of ornaments of the Middle Ages and the Renaissance, or to other styles, at the same time as to the reproduction of statues, statuettes, vases, etc. These are the various products that accompany the Roman portico, the main part of their exhibition. The jury of the eighteenth class having awarded these exhibitors the first class medal, the jury of the fourteenth class only agrees with this decision. "

This year, MM. Virebent frères et fils, have exhausted all the resources that a thorough knowledge of glazes, enamels, vitrifiable colours, and the manner in which the firing should be conducted can offer. Their ceramic monument consists of a square base, a solid triangular part forming an altar, a triangular niche pierced by three arches, and a baldachin topped by a central dome. The shafts of three columns extend from the base, linking the arches of the arcades, and ending in Romanesque bells.

On the columns are painted the theological virtues: Charity, Faith and Hope.

In the niche is the statue of the Virgin, as understood by the Byzantine artists.

Crowned, dressed in the imperial dalmatic, her feet shod with golden brodequins, she holds a sceptre in her hand.

The divine Child is on her lap, wrapped in a long robe, and holding in his hand the globe of the world surmounted by a cross.

By lavishing bright colours on the clothes, Messrs Virebent have left the nudes of their two figures the natural colour of terracotta.

At the feet of the Virgin are two vases containing fleur-de-lis; to her right and left are angels, whose whiteness contrasts with the varied tones of a third angel placed behind her. This one carries in his right hand a plate on which we read Ave Maria, and in his left hand a branch of lilies.

In the interior of the lowered dome, there is a cornice decorated with cherub mascarons. The head of God the father, as seen in the ancient mosaics of St Mark's in Venice or the cathedral of Pagan, is represented between two angels on the azure background of the vault.

The side arcades are closed, up to two thirds of their height, by openwork arabesques reminiscent of those in the Court of the Lions in the Alhambra, and whose lacunae bear a cruciferous nimbus in the centre.

The outer frame completes and enhances this ensemble. The archway on which the Virgin shelters is enriched with brilliant enamel, and is joined to a pediment with gables, similar to that of the façade of Notre-Dame de Poitiers. This central part harmonises marvellously with the side belfries.

In the ornamentation of the lower part of their building, Messrs Virebent were less inspired by the primitive masters. On the front face, there are medallions on enamel of the prophets Ezekiel, Daniel, Jeremiah and Isaiah; above, in niches, white pottery statuettes of the four evangelists; then a frieze in grisaille, divided into compartments and representing the main episodes of the life of Jesus Christ. This frieze continues on the sides, above the two paintings representing King David and the prophet Jesse.

The ornaments of the square base have been judiciously given less finesse and more prominence than those of the rest of the composition. On its broad slab, on both sides of the acute angle of the monument, two grisaille-painted guivres curl up in tortuous folds. They hold banners in their mouths, on which we read these verses: Salve me, Domine, ex ore Leonis. - Et portæ inferi non prævalebunt.

This monument, standing out against the green of the grass and the azure of the sky, produces the most graceful effect. It is a happy application of the art of ceramics, whose progress has been so considerable in recent years, and which is far from having said its last word.