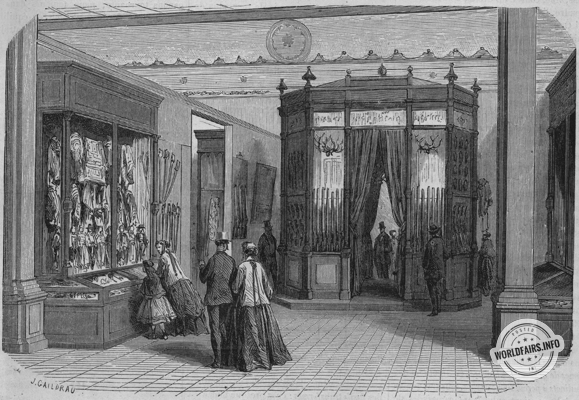 Hunting gear? This is easy to say; but most of our readers will wonder what it could be? I see from here the scholars refer in imagination to the numerous engravings which fill the special books on this subject, books which are perpetuated by copying each other with naivety, without thinking of inquiring if there still exists in France, at the present time, matter for hunting machines! To be sure, let us review the few devices that may still exist; this will not take long.

We can hardly understand under the name of hunting gear, the large nets or halliers, the panels, which are used to catch deer, fallow deer and roe deer for the populating of parks. How many private individuals are left who use these devices? And besides, - another good reason - I don't think that anyone has exhibited any.

Let's continue with our count.
What are we left with? Ah! the traps....First of all, there is the wolf trap, so named, probably, because it is now only set against men. A very easy animal to catch, - incidentally, - while the other, - the one for which the trap was built, - is the opposite, and has, in this case, much more spirit than the first. Indeed, you are the owner of a park or an enclosure of some kind; you decide to use the wolf trap, you write the sacramental sentence on a number of signs that protrude from the walls. That's the public warned. You either set traps or you don't, it's a matter of temperament; but if you only set a dozen, you're pretty sure to catch the first out-of-control kid who comes sniffing around your property. Instead, you can boldly set fifty traps, and it's likely... no, it's certain, that you won't catch a single wolf! There are two reasons for this. The first is that wolves are not common in our country. There are indeed, in certain regions, a fair number of them; but their damage always seems enormous in comparison with the number of predators. The second reason is that the wolf has a marvellous sense of smell and excellent eyesight, and that it has acquired the habit of always looking where it sets foot. Also, nothing is as difficult to trap as the wolf and its cousin the fox. But there is no lack of traps - there are some very nice ones - only animals to put in them.

On the other hand, there is no lack of traps for polecats, weasels, etc., etc.; these are used a little more often, but their operation is not always successful. Finally, we have nothing to say about this, there is nothing new here.

And the hunting gear? There are still pellet bags and powder magazines. It is quite possible that over there, in the middle of the druidic rocks of lower Brittany, at the bottom of the Morvan mountains, behind the forests of the Vosges or the Cévennes, in a forgotten, lost, antediluvian country, there is still a hunter - apart from myself - who uses the stick rifle, but I confess I have given up finding him. Unless it's in the Vendée - because there, if you look at the joists of each cottage, you'll find an old device which is used for everything, if necessary. - I no longer see anything but a mechanical rifle everywhere. I am not blaming anything, I am just observing. In Beauce, the first peasant who comes along has his Lefaucheux, often very beautiful, in any case very good: in Brittany, all over the place, where the peasant hardly ever hunts, it is the owner who is armed with a similar rifle. Everywhere it's the same thing. What then is the use of the magnificent pellet bags, the silver, enamelled powder flasks, etc., etc., which shine in the shop windows? Who still wears these harnesses on his side? Extraordinary thing! the cartridge belt, that other machine so inconvenient, - but which times had managed to perfect, - the cartridge belt shines by its absence! What does such an omission mean? For, after all, I know that the Lefaucheux rifle is, since last year, a fallen invention, forgotten, antediluvian in its turn, but the new .... this year, Y needle, thick, thin, curved or straight, to sew or to cut, the needle has not abolished the cartridge ' And this one must be put somewhere! Unless the public has come to recognise, - with his humble servant, - that cartridges could very well be placed in the pocket before slipping into the rifle. Public education is making such astonishing progress every day!

And the hunting gear? We are arriving, we are arriving very slowly, proceeding by elimination. We are left with the real, the only device, the rifle. But here we must, along with many hunters, ask ourselves this question: why did the Commission put the shotgun in another class? Although the answer seems easy to us, it is nonetheless specious. We said fishing gear, and we added hunting gear. - But the rifle that is usually used is, in the end, only a diminutive of more serious weapons; it was therefore thought that these devices, whose purpose is - whatever one may say! - despite their common origin and manufacture. This was a mistake, we believe, but we are keeping quiet because it is none of our business, and besides, there is no longer any remedy. Ah, if we had had war rods, needle hooks and centre punch reels, all our fishing gear would have followed their hunting comrades, and the products supplied by the gear of the one and the other category would have been left in their class, which was then complete. But, alas, we did not have this advantage, and in order to isolate fishing gear, it was thought necessary to split hunting gear and its accessories in two.

Whatever the case, we shall not follow the same order, and we shall say a few words here about the rifle, with or without needle, the principal device, obviously, of hunting in the nineteenth century, and the one which - from the train we are going to - will see the end of it in a few years! Let it not be thought that we are the praisers of the past! On the contrary. Modern weapons are incomparably superior in all respects to ancient weapons, but what is inferior is the quantity of game. What I am about to write may be very controversial, but it is no less true, and every year it is repeated without anyone bothering to find a remedy. As long as the hunter finds a last partridge, he will say to himself: "After me the deluge! It will only be when, on the first of September, nothing more is found, that, that year, they will think of repopulating the hunts. That will be the time!

Certainly, I am not as old as a patriarch, and yet I saw the use of breech-loading rifles appear; I was one of the first to advocate this improvement, the advantages of which were considerable, but I do not believe I am wrong in saying today, after 25 years, that the improvement of the rifle's loading has made it possible to kill more pieces than before and that, consequently, it has helped the depopulation of our country in terms of game. In the same way I approve - and this is the best thing to do - of the invention of needle guns, but I cannot help seeing in it another step towards absolute depopulation.

At last! since the way is marked out, let us follow it.

Naturally, the number of systems exhibited is considerable, but the quantity of real and practical improvements is not as great as one might think. In France, the improvement of the needle arrived in its time and place. So long had the central ignition of the load been occupied there, so long had all the latch systems been, in the final analysis, only more or less ill-defined needles, that the adoption of the new ideas was made without any effort. A step forward was taken, and all was said. In short, for hunting, the conversion is not as radical as for the army, for which I blame the gunmakers. One principle must be admitted in all its consequences. Almost all French shotguns are only compromises between the old and the new system; I would like to call them transformed shotguns: in almost all of them it is the dog - the dog! - that pushes a needle. Hey, what is the need for a dog? the old sacramental dog?.... The hunter is used to it, you will say, and then he sees better when his gun is armed. Wrong reason, invent something else! Farewell to the old dog! Farewell to the old.... we need something new.... invent something new, if only there were any left in the world!

Another trend of today's gunsmiths. All hunters - since the cartridge rifle - have complained so much about the difficulty of removing the debris of this cartridge from the barrel and about the troubles that follow, that manufacturers have had to look for ways to make a manoeuvre that was not always easy certain. At the moment, the fashion is for barrels which, by tilting, make the base of the cartridge come out and allow, consequently, to grasp it with the fingers and to withdraw it without difficulty. This is all very well, we admit, as long as it is new, cleaned and free from the grime of use; but a rifle is a tool destined to be used, and to be used in the midst of dust, rain, etc. These mechanisms seem to me to be quite fragile, and, shall I say it? - very precise, to function for a long time.

The Belgian exhibitors sent a large delegation of manufacturers, all of whose names can be found, in Paris, on the rifles of most of our hunters. We examined, in this exhibition, a shotgun system with rotating barrels of great simplicity. This is a novelty: we had seen, some 20 years ago, revolving barrels, but always in a horizontal plane, the gun held in balance on the left hand: these, on the contrary, revolve around themselves, one cannot say in a vertical plane, but the entrance of the cartridge chambers comes to be placed beside the lock of the right shot. It is simple, simple, like everything that is really useful!

The German Exhibition, whose drawing is reproduced in our vignette, is the best and most originally decorated of all those in the palace. It forms a sort of small open-air salon, the walls of which are represented by weapons that can thus be admired from inside and outside; add to this a decoration - perhaps too complicated - of trophies, antlers, deer, boar tusks, etc., etc., and you will have an idea of this little Buen-Retiro of hunters in search of a weapon of choice. We do not need to add that there all the weapons, big and small, serious or luxury, war or hunting, are, without exception,... with needle.