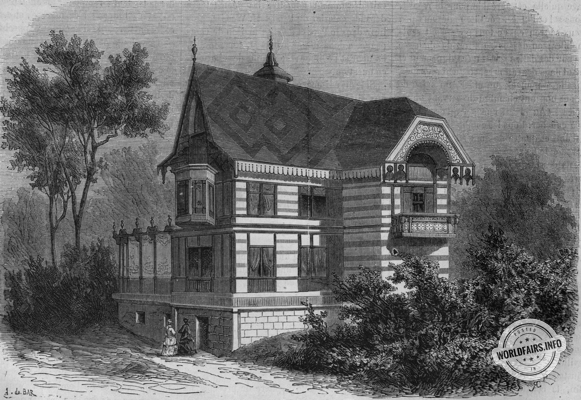 Thanks to Mr. Waaser, one will be able, like the turtle or like Bias, to carry everything with him, even his house.

This is, in fact, the aim of the ingenious exhibitor who has placed before our eyes this pretty mobile chalet built entirely of wood.

In the northern regions, where the temperature allows and even commands wooden dwellings, Mr. Waaser's mobile chalet will be admirably at home. The landlords will have to be careful; the sale of land will become a myth, everyone will rent the site of their home and, at the slightest increase in rent, they will pack up and move a few miles away.

Can you see a whole town of Waaser cottages fleeing from the border to the interior to avoid the ravages of war?

This application is undoubtedly unforeseen for our exhibitor, who has aimed at an infinitely simpler and more pleasant goal in terms of perspective.

The countryside, the seaside, such is the objective of the type of construction of which our engraving faithfully traces the general aspect. The silhouette is very graceful, and if, with the simple expenses of our imagination, advantageously substituting for those of the railway, weak as they are, we transport this charming dwelling to Étretat or Trouville, and immediately make use of the belvedere intelligently placed at its summit, we shall enjoy a splendid view; The ocean with its swells, the beaches with their picturesque sinuosities, the hillsides with their greenery will form an enchanting landscape which will call forth the concentration of our desires towards the sweetness of the holiday. But let us open our eyes; placed on the Champ de Mars, this belvedere allows us to embrace the general view of the Park and the Palace, and as this spectacle is quite rare, we will be satisfied with it, please, for the moment.

The house is as complete for use as it is pleasing to the eye. The basement and the pantry, whose inexpensive materials can be found in all countries, are alone immovable; above, a ground floor raised on mechanically sawn slabs and sliding in grooves, contains a living room, a dining room, a pantry, a flower room and an anteroom serving all the rooms. On the first floor there are four bedrooms. Under the roof, a guest room and four servants' rooms, then the terrace and the belvedere.

Voids in the outer walls stop the heat, humidity or cold; and as there is very little pleasure in this construction, one does not have to wait, before living in it, for the effect of the air usually necessary to dry the walls.

What follows is the business of the architects: but as everyone today is somewhat possessed of the mania for the trowel, I trust that few readers will skip this little paragraph.

The frame of the chalet is made of wood; rabbets and grooves skilfully arranged receive the slabs, exterior and interior, of varying thickness.
The iron bolts and pegs which make up the whole fitting system are carefully concealed; finally, the slate roof is laid according to a system of hooks owned by Messrs Monduit and Béchet.

Allow me to point out a detail of execution to end this short description:
During the time it takes to build the different parts of the chalet in the workshop, the foundations are dug and finished, so that the assembly can be carried out very quickly. Time is money", say the Americans, who invented the first mobile homes: Mr. Waaser found they were right.

It pleased our draughtsman to complete the view of Mr. Waaser's cottage by giving us a faithful reproduction of one of the prettiest rooms on the ground floor.

Now, in this room there is chocolate - if only there was still chocolate! But there are wines, beer, all the modern nectars that have invaded the lounges adjoining the chocolate one, as well as the basement conceded to Mr. Brizard for the tasting of excellent Vienna beer; our drawing represents the entrance to this cellar - such is its name - installed in a part of the Exhibition that was totally deprived of refreshments.

It must be admitted, however, that the exhibition of drinks would have very little charm if one were content to place a cup of chocolate or a bottle of Chateau-Laffitte in a toasted display case! How can one judge the merit of a drink by the shape of the bottle or the envelope of the chocolate? A moralist once said that labels are often deceptive, but tasters could not decently be admitted to the galleries of the Palais. Mr Waaser, who was freer in the Park and in his country house, therefore gave shelter to Mr Chambrault, the author and publisher of the chocolates in question.

If I say publisher, it is not to add an idle epithet to Mr. Chambrault's titles. There is a whole system in the way this exhibitor understands his industry.

In addition to conscientious manufacture, such as we desire for those delicate foods which are the most valued supports of weak stomachs, in addition to a very special choice of machines and capable workmen, our exhibitor, who has strong ideas on matters of public education, has inaugurated a combination of useful and ingenious premiums.

Purchases of a certain value entitle the holder to volumes from a collection of works on culture, economics, science, art and literature, so that those who wish to feed their stomachs also feed their libraries: some agricultural communities have eagerly seized this opportunity to acquire free of charge works that they need.

There is in this way of proceeding a germ of the combination which gave birth to the Magasins Réunis: economy through expenditure; in fact, a purchase from Mr. Chambrault dispenses with another equally useful purchase which should have been made anyway.

The agricultural survey which the Ministers of Agriculture and Public Education undertook, and according to which they expressed to His Majesty the Emperor the desire to see agriculture taught in all the communal schools, has produced an unexpected result in the case before us.

It was, in fact, this idea that suggested it to M. Chambrault; so, restoring its true character, we thought we should record this result, which in a publication such as ours, an echo of an Exhibition where everything is on display, even ideas, is by no means out of place.