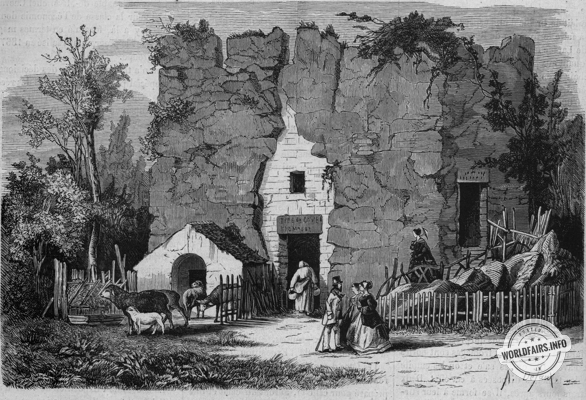 Monteil, who was from the Aveyron, had one of his characters in the History of the French say: "The best cheeses are those," not of Brie, as the saying goes, "but of Roquefort, as the "truth" goes. "

Is Roquefort really the best cheese, as the truth demands, according to Monteil? Not being charged with pronouncing as a juror of the class, I do not wish to expose myself to make the Stilton or the Hollande blush inwardly or outwardly, to make the Brie shed tears of spite, or to force the Gruyère to make big eyes at me, by invoking the opinion of Monteil's character. But it is not a question of knowing whether Roquefort is the best cheese: it is only a question of knowing how it is made.

And why is it a question of knowing how it is made, and what is made of it? It's because the owners of Roquefort probably didn't spend a lot of money to set up a facility on the Champ de Mars, so that no one would ask about their production.

Strange thing though! It seems that the exhibitors who have spent so much money to make people talk about them, want to evade information: they are never there to answer. The same ones who, when you meet them, grant you the right to talk about them as a favour, even though they have made huge sacrifices to make themselves visible. This reluctance of some exhibitors to give information is due, I believe, to the article of the General Regulations which allows them to refuse their consent to the reproduction of their exhibits.

In any case, this disdain for publicity on the part of people who should be eager for notoriety is a curious and strange feature of morality to note.

So, in order to have useful information on the cellars of Roquefort, we had to take it from somewhere other than the place where these cellars are exhibited at the Champ de Mars, the German quarter.

We found two cabanieres, dressed in the local costume, busy preparing their cheeses.

In the cellar on display, as shown in our drawing, the main emphasis was on showing the interior layout of a functioning cheese factory. An adjoining sheepfold contains four dairy ewes and a ram of the finest type in the country, the Larzao breed.

In order to render the external aspect of the Roquefort cellars adequately, it would have been necessary to depict an immense rock 100 metres high and to push back the fissure which serves as a cellar into its sides. We had to limit ourselves to representing a facade which, through its stratification, recalled the colour, the general aspect and the layout of the rocks of Aveyron.

In fact, the Roquefort cellars, unique in the world, are the bizarre result of one of those great whims of nature which, in ancient times, took pleasure in upsetting the globe. Geological research has shown that in one of these cataclysms a portion of the mountain broke away from the main mass and collapsed onto the surrounding ground, breaking into several blocks whose cracks or crevices formed the caves we are talking about.

It is at the foot of this portion of the mountain, which has been broken and cut off at a height of more than 100 metres, that the village of Roquefort has been established. This is the mountain of Combalou.

The blocks, by settling down and becoming cluttered in their displaced position, have left numerous cracks between them which extend far into the rocky mass and sometimes cross it from side to side. The voids form so many natural air vents, whose air currents cool and saturate with humidity, by passing over the clusters of water collected in certain cracks. Under the action of these fresh air currents, the temperature of the cellars drops to 3 degrees centigrade in summer; and, by a physical effect of evaporation on the humid mass of the rocks, the rise in the outside temperature further contributes to cooling the inside temperature.

It is these particular temperature conditions, necessary for the preparation of Roquefort cheese, which give it its qualities.

Pliny speaks of a certain cheese from Luzara (Lozère) which could well have the same origin as Roquefort. In the Middle Ages, it is especially mentioned in the dues of the serfs to their lords or their feudal abbots. We know the opinion of the character that Monteil portrays.

The number of cellars is limited. A company of merchants was formed in 1851 to run the main ones; the others belong to individuals. The ownership of one of these cellars is worth a rich farm.

The milk of a particular kind of sheep is used to make Roquefort cheese. The Larzac ewe is not remarkable for its proportions and its yield in flesh and wool: but it is an excellent milk producer.

250,000 ewes, divided into flocks of 200 at most, either on the slopes and summits of the plateau, or at the bottom of the valleys where they find more abundant pasture, are sufficient to produce the quantities of cheese we have mentioned. Each ewe produces about 80 kilograms of milk per year, or ^kilograms of cheese.

The milk is poured into large vats, heated slightly and skimmed. The curd, with the whey removed as completely as possible, is then placed in clay moulds with holes in them, where it is left to drain. Two or three layers of mouldy bread are spread in the curd, thus prepared, which helps the formation of those blue and greenish sporules so sought after by gourmets.

All of the above preparations having been made in the farmhouse, the cheeses are taken to the cellars. There, they are salted and stacked on shelves set up for this purpose. Two or three days later, a layer of sticky material forms on the surface of the cheese, which is removed by scraping. The cheeses are then stacked again for eight days, and then folded, i.e. laid on the field, making sure that they do not touch each other.

About 400 women, called cabanieres, are employed for this work. After thirty or forty days, the cheeses are delivered for consumption: but, at this degree of maturity, they are not likely to be preserved. Those, on the other hand, which spend the rest of the season in the cellars, can be kept all winter, and have more firmness and an exquisite taste.

Imitations of Roquefort cheese have been sought, especially in neighbouring areas where the same breed of sheep and similar climatic conditions were found: none of these imitations have been able to deceive true cheese lovers.

In the Champ de Mars model, one enters directly, from the outside, into a vaulted corridor that leads to the cellar, built as in the country, where the cheeses in various stages of preparation are kept. From there, a staircase leads to the first floor, which is a showroom.

Did I need, I ask you, the information of the exhibitors to speak properly about the manufacture of Roquefort cheese? Will they forgive me, at least, for claiming the gold medal for them?