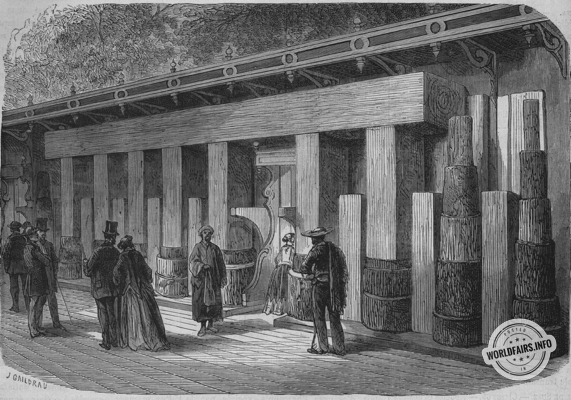 We would have to go around the world, and consequently around the Champ de Mars, to fully respond to our title, for each country was keen to fulfil its programme and each one brought, whoever it was, what its forests seemed to offer that was curious. There are treasures there, in a corner already covered with dust and completely ignored, which no one will go to,. - And in ten, fifteen or twenty years, they will come back to us at the next Exhibition, as new discoveries. It must also be said, in truth, that the manner in which these specimens are presented is not always engaging, and that the curious researcher is not very comfortable studying the samples he is looking for either. The greater part of exotic woods is simply laid on the ground, in a heap, in a corner or along a small forgotten gallery, in which you seem to be lost, and where the representative of the country is so astonished to see anyone, that he is tempted to require a town sergeant to apprehend you by the collar and search your pockets, for a man who thus seeks solitude under the pretext of feeling for bits of wood, can only nourish and hide evil designs.

Canada, of which our vignette shows one side of the Exhibition, has not followed these unseemly ways. It has treated its woods as they deserve to be treated, that is to say, as precious things, and it has done well, because, by bringing them to light, everyone will gain, first it and then the public. Is this not all that is needed?

The collection we are talking about can be divided into two distinct parts, the first comprising specimens of wood in the form of work, i.e. polished and varnished, the second presenting samples of the same wood in log form, i.e. covered with their bark or simply squared. It is the latter that the engraving represents with great fidelity. This enormous piece of wood that crowns the building like the architrave of a colonnade is what the Canadians call the yellow pine or red pine, and what we call the Weymouth pine. You know, that pretty resinous tree whose fine, long, hanging needles sway, like real leaves, at the slightest breeze? In France, we simply admire the rapid growth of this tree, we introduce it into our repopulations and, in Sologne, it starts to become common. In Canada, it is a tree of the first magnitude, whose area extends from Lake Champlain to Lake Saint-Jean, - which is no small thing to say! - Its dimensions can be judged by the specimens hanging in the air before our eyes. This little piece of wood is 15 and a half metres long and 75 centimetres square: it weighs 10 tonnes!

It is supported at the front by a log of moiré birch which has 65 centimetres of squareness at the edge and shows admirable veins. These are marvellous pieces of wood, only 2 metres high, which are presented in Canada as a very small sample, and which, healthy inside and out, will produce the most splendid furniture in the world when cut. To convince ourselves of this, let us enter through this door, which seems to be guarded like threatening sentinels by two large marine curves made of spruce larch, an incorruptible species that we do not possess, and let us go through the cabinet-making room.

On a long desk at eye level, varnished samples are displayed side by side. At first, the visitor thinks he is looking at an exhibition of silky fabrics folded into pieces: there is moire, satin, brocade.... there are all the possible fantasies, light, dark, white, black, red, yellow, even green! There is satisfaction for all tastes. And yet, these fantasies are not the work of man, they are simply the play of nature!

In our country, ash is a good timber, frank, honest and bendable, that's all. In Canada, the ash - or rather their ash, the While-ash - is all this as ours, only it is moreover - and when it pleases - the most splendid wood for cabinet making that can be seen. In this connection I am forced to digress and deplore the mania which is now sweeping our cabinet-makers towards dark wood furniture, whereas the golden hues of the Canadian ash moire would blend so well with rich and cheerful draperies of blue or cherry silk. How gaily the light plays on these waves, on these ribbons ringed in a thousand ways!

It is an unknown mine that is being opened, for this is the first time that these specimens have arrived in Europe: it is only a few months since the discovery of the moiré ash. It seems extraordinary to say that the moiré ash has been discovered, when this tree is scattered in forests that cover an area as large as - if not larger than - France. And yet nothing could be further from the truth.

The moire of the ash is - like that of the Sugar Maple - a game of nature in this country. The tree has no outward character, no leaves, no bark, no fruit, that might give rise to a suspicion of what it is worth. Only when it has been felled and the axe put to it, does it show whether it will make carts or whether it will be the most beautiful furniture in the world.

To go from the soft to the serious, from the pleasant to the severe, we need only take two steps and stop in front of the famous American black walnut. Its name tells us what it is, but it does not explain that, with its rich, warm golden tones and varied texture, it is also one of the kings of Canadian woods. The large black-barked log - seen in the foreground of our engraving - is a piece of black walnut that is only 350 years old. What a soil, that can provide such rapid growths in first class hardwoods!
Let us cross the machine gallery and delve into the products of the southern continent and the huge islands that surround it. First of all we must expect to find something new and unexpected. Residue, forgotten no doubt, of a vanished era or premature trial of a revolution to come, Australia is paradoxical in all its products. The country that bears quadrupeds with bird beaks, birds with quadruped hair, that replaces songbirds with parrots, rodents with marsupials - which is like saying hares with Kangaroos - such a country cannot fail to produce curious anomalies among the trees. This is what happens. We find there woods as hard as iron and others as soft as willow, the former produced by trees without leaves or more or less, and the latter grown by vegetation without branches.

We are in the land of the gum trees: there are trees of all colours. One of the most beautiful is the marbled gum tree, whose scientific name is Y Eucalyptus maculatus, and which enchants the eye with its pink wood shaded in a special way. Branksia or Honey-Suckle is still a wood of the future; but our creators would have to be willing to take care of implementing all these new riches. I know that it is much more convenient to walk, - as they are doing at the moment, - in the middle of ebony, the saddest wood imaginable, - a wood good for making coffins and dominoes! - than to search and find something new. But it would be nobler to make cabinet-making out of real wood than to make it out of anything else, which Ton will manage to do by following the path that Ton has taken for a few more years. 1 But let us leave the artists of today, almost all of whom have the ambition of playing the flute with a violin, and let us quickly return to nature, which does not make anything false or forced.

It is impossible for us to quote the thousandth part of what we have admired. The Casuarina, a golden rosewood colour; the Southern Cedrel, a pink mahogany; the Helicia with purple veins;... What do I know? All the fantasies of the imagination resolved and represented... Not forgetting the Burram-murra, a plain pink wood, but speckled with staggered beads as exactly spaced as if they had been drawn with a compass!
And Brazil,... and the Argentine Confederation,... with their virgin forests and their new species, - unknown, although for three centuries they have drawn from them almost everything we use for our furniture... And the Philippines, and the Sunda Islands? And... but I'll stop - because it's so confusing - to simply return to Europe for a few moments.

- What to do in Europe? To look for woods comparable to the splendours we have just admired... Obviously not: but to find an unknown or little known Canada, almost on our doorstep, and whose products, in spite of this, reach us much less easily than those of the real Canada separated from us by the whole width of the Atlantic. It has long been said that the sea is the great common road of nations. Nothing could be more true.

Our European Canada is called Austria, and its exhibition in the open air of the Park is very interesting. Here we have a curious fact, that the two nations we have just compared, Austria and Canada, are precisely in the presence of each other and in competition to supply us, the French, with the wood we lack. And, in spite of everything, I lean, as a price, in favour of the Canadians. In terms of the beauty of the samples brought in, they do not lose out to the others. But, in spite of the fact that our forefathers - who were not thrifty enough, alas! - ransacked our heritage forests, France would easily compete with the samples brought here by Austria, as our exhibition at the École forestière proves. Having said this, to reassure our self-esteem, let us note that there is here, under the black and yellow pavilion, a certain ash tree 40 metres long - 120 feet! - without branches, and almost 2 metres in diameter at the roots.... It is pretty! So it finds a buyer at 1500 fr., but the owner doesn't let go!...

Next door, we see, lying on its side, a modest pedunculate oak with an average diameter of 1.5 metres and a length of 20 metres. This tree has a cubic capacity of 16 cubic metres. In the forest of the Military Frontier where it grew in Croatia, it is worth 64 fr! To bring it here, by land, it cost about 320 fr. for transport; it has just been sold for 2400 fr.

I would quite like a park that would only offer me a hundred of them, to be cut every year!