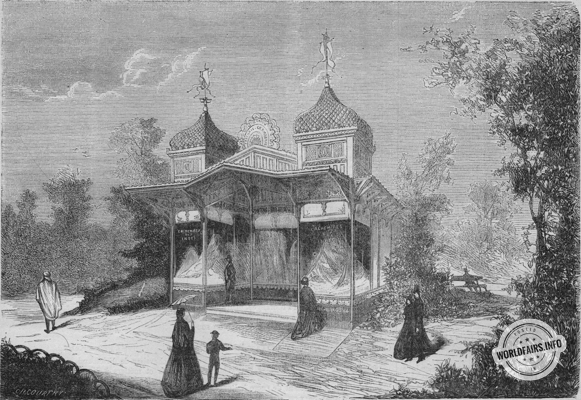 A charming kiosk, modestly hidden in one of the shadiest groves of the Parc du Champ de Mars, contains the fantastically rich fabrics that are made in Kashmyr.

The architect who built it is a talented man whose abilities have often been used at the Universal Exhibition, abilities that have just been recognised by a promotion to the Legion of Honour.

To quote M. Hochereau is to praise his work; it is to sum up the science of style and the grace of design.

The tasteful exhibitors who gave such an artist the mission of creating a frame suitable for surrounding the sparkling designs of Indian fabrics are called Messrs Frainais and Gramagnac.

But why did they bury one of the most beautiful private exhibitions in a corner of the Park? We address this question to the Imperial Commission, and, in order to guide the visitor as well as to repair this little defect in classification, let us quickly say that this kiosk is situated near the perimeter of the Palais, in the Champagne alley near the workers' house.

The supporters of Lyon's industry who, moved by their patriotism, cast an envious glance at the marvels made by Indian weavers, exalting the superiority of French industry, often wonder why French importers place so high a value on foreign arts. Beauty has no homeland, or rather it is at home everywhere; the power of our machines, the skilful mechanisms of our looms are certainly capable of producing such beautiful things, but here a question of price arises which certainly has its importance, and which would have a much more considerable one without the intervention of heavy customs tariffs.

What does it matter? Let us take advantage of the gifts of nature; and nature makes these pretty little goats grow in India, of which we see a few samples in the Garden of Acclimatization; their long, silky hair protects a fine down which is used for making shawls. It is true that one can try to acclimatise them in France; but what cannot be acclimatised are these workers, unique in the world, who are dressed by the climate itself, fed with a little rice, satisfied with a minimal salary, if one can apply this word to a sum of 20 centimes per day, and who from generation to generation pass on to each other, in front of the same looms and in front of the same processes, the art of weaving shawls pushed to perfection.

The superiority of India has always been recognised, from the Romans, who, according to Pliny, brought them fifty million sesterces every year, to the present day, when modern sesterces amount to millions even more.

A shawl from India, which can be bought for 2000 francs in the valley of Kashmyr, would cost no less than 25 to 30,000 francs to make in France. Now, here is how it is done: women spin the down of Kashmyrian goats; the yarn is then delivered to the dyer who gives it, with the help of processes that are naive by dint of their simplicity, and of which we have no idea in France, the splendid colours whose solidity and richness we admire.

The weaver arrives and executes the design given to him; each weaver makes a piece of shawl; then a contractor, who must lack neither taste nor talent, has the most skilful workers assemble the different parts which then form the whole shawl.

The finished shawl is dry-cleaned, coated with rice glue, and then delivered to the European buyer who has directed its manufacture.

MESSRS. Frainais and Gramagnac, who have exhibited shawls of an admirable variety of designs, some of which are embellished with gold embroidery of unprecedented delicacy, have their workshops in a large centre of the Punjab, at Umritsir; In another part of the Palace, they also exhibit laces of great beauty, whose factories are located in Alençon, Bayeux and Brussels; they thus bring together the most delicate types of fabric, and for the execution of which it is necessary to combine the power of industry with the inspirations of art.