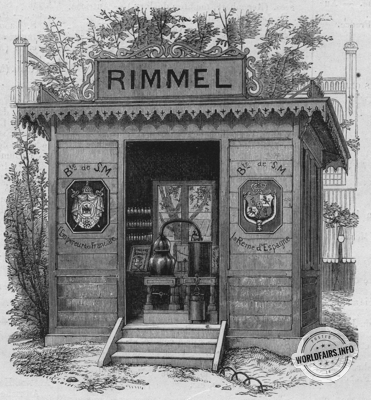 Mr. Rimmel's Exhibition is installed outside the Palace, in the English section, near the Electric Lighthouse, in a pavilion whose appearance is shown in our engraving. It is where Mr. Rimmel gives to the crowd of curious people who crowd there the spectacle of the distillation of perfumes, in a still which does not cease functioning from the morning till the evening.

Fixing the fleeting aroma of flowers, collecting and storing it, is a delicate art to which all peoples have applied themselves since ancient times. The history of this art is curious; and our English perfumer, who has studied it in depth, has placed before our eyes, as a commentary on his exposition, a beautiful volume of nearly 300 pages, written in English, which is nothing other than a detailed history of perfumes and the art of perfumery. Natural science is united with historical science; the author, after having made the physiology of perfumes, studies them successively in the feasts of Apis and Osiris among the Egyptians, in the balsams and incenses of the Jews, in Babylon, in Nineveh and among Sardanapalus; among the Greeks, where he introduces us to the mysteries of Eleubis, to the toilet of Juno and to funeral ceremonies; among the Romans, whose perfumes and cosmetics he reveals, as well as their use in the toilet of matrons: Among the Arabs, where he tells us about the invention of rose water; in India, in China, in Japan, even among the savages; and finally, by a sudden return, he also analyses the history of perfumes among the Druids, and later, at the times of Clovis and Charlemagne, under Catherine de Médicis, Charles I, Louis XIV and Louis XV.

To complete his written study for the eyes, Mr. Rimmel has installed in his cottage a very interesting collection of aromatic substances used in perfumery. The common names are listed alongside the scientific names, and no care has been taken to indicate the places of origin.

I have noticed in particular some very curious specimens of exotic flowers which, having arrived from Brazil and India, preserved in glycerine, have not lost their forms or their scents.

There are several processes for absorbing and fixing the different perfumes: distillation, which is used for plants and certain flowers; expression, which is used for the essences naturally contained in certain fruits, certain peels such as lime, bergamot or citron; and maceration, by means of which the perfumed molecules for which the liquid has an affinity are generally dissolved in a spirit.

Grasse, Cannes, Nice and the Indies are the places from which the greatest number of raw materials are obtained. French exports amount to an annual figure of 15 million francs, and imports do not exceed one million, even including certain materials which serve as a basis for perfumery.

These figures show how considerable the French perfume industry is.

The name of Mr. Rimmel is as well known in Paris as in London: and it is in both capitals that our exhibitor exercises his industry.

His manufacture is of great variety, and his products are justly renowned.

One remark is suggested to me by the very reading of Mr. Rimmel's work: it is that, if the perfumes of flowers have a natural sweetness full of charms, they also conceal that occult poison which makes them harmful in flats where the air does not have free access. Also the mysterious science of the perfumer, who was once called a sorcerer, if I believe the legend of René, the famous operator of Catherine de Médicis, must tend more and more, by collecting the fugitive aromas of flowers and plants, to remove their toxic properties and to imprison them in the retorts of the laboratory. This is what Mr Rimmel has been working on.