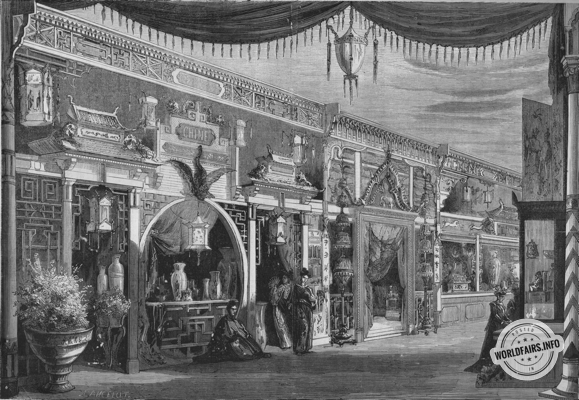 There is one part of the Exhibition that I cannot go through without feeling a strong sense of national self-love, and that is the section reserved for the States of Africa and Asia. One is astonished when one thinks of the sacrifices that countries so far away, so foreign to our civilisation, have made in order to be included in this universal competition. And, for my part, I know of no more striking proof of the prestige and ascendancy which France exercises on all points of the globe.

The most complete and brilliant exhibition of all the Asiatic states is unquestionably that of Japan - it is not only the Taïcoun, the temporal sovereign, who has taken care to gather together the most remarkable products of his empire to send them to France. The most powerful of the six hundred feudal princes among whom the territory of Japan is divided, the Taïchiou of Satsuma, who possesses nine palaces in Yédo and who is forced each year to spend six months in the capital, makes his entry there at the head of a very respectable army, the Taïchiou has asked for and obtained a site where all the most marvellous products of Japanese industry are accumulated: chests, small pieces of furniture furnished with microscopic drawers, with silver or ivory ornaments; bronzes, earthenware, crystals, pieces of that eggshell porcelain, so rare in Japan that one can hardly find samples of it except in the homes of the highest personages, swords whose copper or wooden scabbards hide steel blades of the most admirable temper; Swords whose copper or wooden sheaths conceal the most admirable steel blades; swells cut from the purest rock crystal, a very precious ornament; plaster statuettes representing bathers and giving a very complete idea of the plastic beauty of Japanese women; in a word, all those delicate and charming fantasies, so appreciated by European amateurs.

All the furnishings are covered with painted lacquer; it is the relief of the design on the wood that makes the work perfect and gives the object its price. The varnish itself is extracted from a shrub called Orosino-Ki. It is said to be obtained by making incisions in the three-year-old stems, from which it flows like the milk of rubber trees. It is coloured in various shades by means of colouring ingredients with which it is mixed on a copper plate; it is then applied in successive layers and gold and silver designs are added.

The most famous emblems are those of longevity: the turtle, the stork and the fir tree. The Japanese have a great taste for chimeric animals. For example, they like to decorate the turtle with a big bushy tail; they also very often represent a fabulous monster with the head of a dragon, the body of a horse and the feet of a deer. In addition, the Fusi-Yama, the great volcano of the island of Nifon, junks sailing under full sail and fish beating the waves with their tails with fury are among the favourite subjects.

There is also a very complete collection of pipes, many of which are decorated with small groups of wooden or ivory, representing grotesque subjects, but very delicately executed. The pipe, in Japan, is an obligatory accessory of men's costume; it is worn suspended by a silk cord from a button of the dress. The pipe is made of a reed; the hearth is of bronze, but very small. A pipe contains only one puff of smoke; a pinch of tobacco is rolled to make it the size of a pea; it only takes a long draw to burn it all up; this explains how a good Japanese smoker smokes a hundred pipes a day. The tobacco is of a pale shade and quite similar to Turkish tobacco; only it is cut finer and the flavour is more delicate. The best tobacco is from the provinces of Satsuma and Nangasaki.

Alongside the Japanese products, and even somewhat confused with them, are the objects sent by the King of Siam. This exhibition, organised by M. de Grehan, is very interesting. One can see jewels, vases in cloisonné enamel, gilded silver gargoyles, a jasper tea service, a beautiful tray inlaid with mother-of-pearl, and a very curious collection of objects of worship. It is known that Buddhism mixed with some Brahmism is the religion of the Siamese people. The idols exhibited are in various attitudes; next to them are the shrines which contain them, the golden pulpits, built on the model of the famous pagodas of Siam and Bangkok. But the main object of veneration of the Siamese population is the elephant, a sacred animal, the hunting of which is the monopoly of the Crown. The most beautiful elephants are reserved for the king and the lords who possess very numerous private herds of them. The one that the king usually rides is admirably trained; at the sight of his master, it bends of its own accord. His harness is magnificent and the throne he carries on his back is all dazzling with gold and gems. Well, this animal, important as it is, has a superior in the ash-grey elephant, Buddha's representative on earth. The ash-grey elephant has a temple and a palace at Bankok; the mandarins make a point of serving him; the vessels in which his food is brought are of solid gold; covered with gold and jewels, he never goes out except with his head protected by parasols against the rays of the sun; He has a sense of his dignity; grave and majestic is his pace, when, at the first light of day, he advances to the threshold of his temple, and, raising his gold-painted horn in the air, gives the signal for prayer to the assembled people.

It is regrettable that the King of Siam did not imitate the example of his neighbour Taicoun, and that he did not see fit to show us some of his bodyguards. I would have been quite satisfied for my part to know what to expect of this battalion, composed of 400 young ladies chosen from among the most beautiful and robust girls in the kingdom. At the age of 13, it seems, they are drafted; at 25, they enter the reserves. Chastity and devotion are absolutely required of them. In return, they are highly regarded, well treated, richly dressed, and enjoy the absolute confidence of the monarch, who would never venture on a hunt or an expedition without his battalion of Amazons.

It seems that I should have spoken of China first; but it is an honour she does not deserve. The Celestial Empire has responded negatively to the invitation extended to it by the French Government. So the Chinese exhibition has the serious disadvantage of not being one. Private individuals and merchants asked for and obtained permission to display their curiosities and imported Chinese articles for sale on the Champ de Mars. This is not the way a country's industry should be represented at a Universal Exhibition. The richest of these collections is that of Mr. Charton. One sees there several pairs of beautiful vases in porcelain, bronze, and cloisonné enamels, various pieces of furniture in carved wood among which one notices a bed furnished with its not very elastic bed in braided straw, a superb screen whose silk facets are decorated with admirable embroideries, objects made of carved ivory (we know that the Chinese are the first ivory makers in the world), and a thousand other trinkets which are very pretty, but which may be reproached for being placed there for too obvious a speculative purpose.

In short, if we have one good piece of advice to give our readers, it is not to forget in their visits to the Exhibition this corner of the Palais which introduces us to a civilisation that is still little known. Mr. Lancelot's drawing gives a very accurate idea of the picturesque architecture and the elegant decoration of the façade; the best praise we can give it is to name its author, Mr. Alfred Chapon.