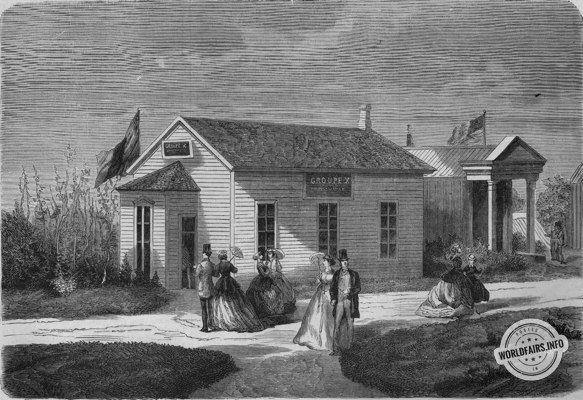 This farmhouse, of which we give a drawing, is indeed already comfortable and almost luxurious. It is presented as a specimen of a very common type of private dwelling, the number of which is rapidly increasing around the large cities, where it is very popular.

There is a long way to go from this, as we have already indicated. We do not think it bad that this pretty cottage has been built for us; but we would have liked to see the simple pioneer's hut standing beside it.

Besides, it must be confessed, the American commission seems to have quite neglected its interests in the Park. The United States itself is really not represented. One State, Illinois, has done it all, and one man in Illinois, Mr. Lyman Bridges, whose unique name it is as fair as it is easy to remember.

Mr. Lyman Bridges, it is said, is himself an example of how fortune rewards hard work and energy there.

The house he exhibits was made in Chicago, the capital of Illinois; it can be dismantled, and transported with the greatest ease. The pine and oak forests of the State of Wisconsin provided the raw material.

This house contains, on the ground floor, a very pretty living room, and two other rooms, which serve, one as a dining room, the other as a library. The first floor has three bedrooms. An exterior gallery with columns gives the whole a very elegant appearance.

It is almost useless to add that a basement is often built for the needs of the household, and that the outbuildings of the farm are entirely separate from the dwelling house.

These kinds of dwellings are very moderately priced.

The windows are sash windows, as in almost all American dwellings.

A large quantity of pamphlets, volumes and maps, relating to the State of Illinois, and its neighbour, Iowa, have been collected in this house and are freely offered to visitors. Unfortunately, almost none of these publications are translated into French.

The United States Congress has indeed been too sparing.

This year, the same city contains more than 225,000 inhabitants.

This increase in population extends to the whole region, and the neighbouring states are being populated with the greatest rapidity.
The gigantic railway, which is to join the Atlantic to the great ocean, is advancing on both sides, and the precise moment when the two sections will meet can already be indicated. This moment will accomplish the transformation of the whole of America.... hour well worthy of being sung by a poet, if the Anglo-Saxon race still had stoves.

One establishment, more interesting than the villa, is the school. It stands a few steps away, and is still from Illinois.

It is a model of those schools, which are called: Free common school, i.e. free communal school, essentially free. There are a considerable number of these schools all over America, which do not prevent the creation of fee-paying colleges.
In the villages they consist of a single room, which also serves as a place of public assembly; there are readings, meetings, etc.

This table is very curious and gives rise to some very instructive reflections.

It clearly shows that all children in the State of Illinois are receiving instruction. In fact, 700,458 children are of school age; 573,976 go to free schools; 29,319 to private schools; add to the total the number of well-to-do children raised in their families, which is common in the United States, and finally add the sick of all kinds, and the figure of 700,000 is reached.

The result is that (the dollar being worth more than five francs) the State of Illinois spends a sum of 21,579,018 francs on primary education. The population of [ Illinois is 2 million souls. In the whole of France, a sum of 19,918,121 francs was spent for nearly forty million souls in 1767, and the total budget for public education for the year 1868 was fixed at 21,950,821 francs. It is true that in France, there are other expenses that are considered more indispensable!

In these schools, one learns to spell, to read, to write, to draw, one teaches grammar, arithmetic, geography, history, vocal music, German, French; and in several, Latin, Greek, philosophy, chemistry, geometry, and in a word everything that constitutes a higher education.

In the new States, a portion of the land is appropriated to the schools and becomes their property. When a village is founded, before the land is distributed to the inhabitants, the school's share is made. This system is excellent, for if, as the population increases, the expenses of the school are greater, its property acquiring a more considerable value, enables it to meet everything, without hindering anyone.

It is enough to visit the model on display to see the superiority of these facilities over ours. The tables are charming and comfortable. The master himself has not one more beautiful than the children. Next to him is a harmonium. On the right we see a number of objects intended to facilitate study. Such are these small pieces of wood, forming circles, triangles, cones, and so convenient for proving in an instant the truth of the first principles of geometry. - Such are also those diminutives of spheres and school systems, of which many French colleges are unfortunately deprived, and which would spare our children so many punishments, by helping the clear exposition of science. Here again one will find many elementary books.

The school and farm are about all that America built at the Exposition. We saw, however, a small cypress house from Louisiana, which is also a portable house. There is nothing particularly curious about it.

The Louisiana cypress is one of the most useful trees in America. Not only does it serve for construction, but its branches furnish a kind of moss which, when put into water, and undergoing fermentation, gets rid of the green which envelops it; under this green is a flexible thread, of which excellent mattresses are made in hot countries.

When the traveller has glanced at the little vessel which brought two sailors from across the ocean to Europe, and has bought a dozen biscuits from the American factory, he will have completed his exploration of the United States.