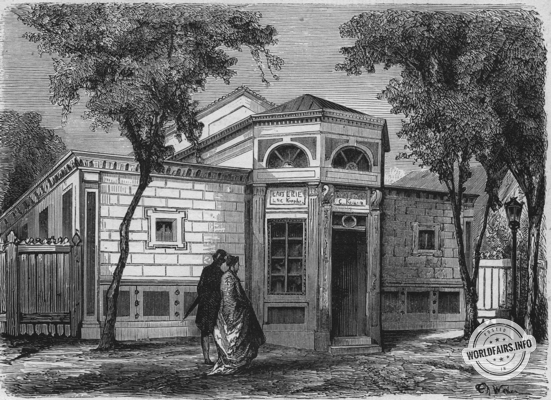 The Parc du Champ de Mars contains several collections of domestic animals, as well as numerous specimens of rural buildings. All these establishments are included in Group VII0; they are of great interest to visitors from the city, whom they introduce to the first elements of practical agriculture. There is nothing like putting into action the scenes of rustic life to arouse the attention of the most indifferent. Man, so long as he retains his native qualities, is always more or less seduced by the great spectacle of nature.

Among the specimens of agricultural establishments installed in the Park, I must mention the dairy of M. le comte de Kergorlay, which a special newspaper described as a dairy of great style. We give here a drawing of the dairy and describe its interior layout.

It consists of an elegantly built pavilion with two recessed wings; the facade is carefully decorated; the interior includes a room for consumers who want to drink natural milk from the cow's udder. The woman who dispenses it is an old Norman woman who has remained completely alien to the progress of civilisation. To the left of this room, there is another one where the milk terrines are stored. Marble tubs, filled with fresh water, hold the full vases. A third room, also equipped with marble vats, is reserved for the cream; finally, in a last room is the churn. But it is not used, because the products of the cow shed cannot satisfy all the demands of the visitors.

The cow shed, situated at the back of the pavilion, is divided in two by the service road. On each side are two Durham-Norman crossbred cows; one of these cows won a gold medal at Billancourt during the first half of May. The butter from these cows, also exhibited at the Champ de Mars, won a silver medal. Finally, it is to be presumed that, as a specimen of agricultural establishment, the dairy of M. de Kergorlay will be judged worthy of an award.

M. de Kergorlay is not a fancy agronomist as one meets so many in the world. He is a serious farmer who, since 1835, has been holding the ploughshanks and managing the Canisy farm of which he is the founder. When he became the owner of this farm, he was young and could, if he wanted, have made a fine career in diplomacy or administration. This prospect was quite capable of seducing a vulgar mind. But M. de Kergorlay knew how to resist the temptation. He thought that he would be of more service to his country and to those around him by devoting himself entirely to agriculture.

He bravely set to work, for the recovery of this ungrateful and long-exhausted land presented great obstacles to overcome. Situated 8 kilometres from Saint-Lô (Manche), this farm, of which we give a bird's eye view, occupies the bottom and both sides of the Joigne over an area of 3 kilometres. The soil is a decomposition of the schistose rock that forms the subsoil. Often this rock is covered by a deposit of impermeable clay. The vegetation layer is very thin. Its thickness on the slopes varies from 10 to 50 centimetres. In 1835, the banks of the Joigne were nothing more than a vile marsh which gave fever to the surrounding area and produced only aquatic plants of no value for cattle feed. This cursed farm could hardly find a rent of 60 francs per hectare.

M. de Kergorlay had a difficult task to perform. The land was invaded by weeds and ferns which had to be removed. The vegetation, which had been poorly worked for so long, had become even thinner and needed to be made deeper; the valley floor was marshy and needed to be cleaned up; the farm buildings were in a bad state and needed to be repaired and successively enlarged; The meadows were insufficient and of a bad nature, they had to be improved and new ones established; the livestock, poorly fed, were puny and too few in number, it was necessary to replace them, to house them well and to gradually increase their numbers; finally, the crop rotation was poorly conceived and gave only low yields, it had to be reformed.

Such a vast programme required a man's existence to be fulfilled in a suitable way. After twenty years of studies and work, M. de Kergorlay had successfully completed an undertaking that was considered unfeasible in the country. He had made an excellent financial operation, and what is even better, he had given his neighbours the example of great perseverance combined with talent, and as a practical result a brilliant success. I think I should summarise in a few words the improvements that have transformed the Canisy estate.

Deep ploughing, supplemented by the digging plough, made it possible to give the vegetation layer more thickness. The soil was purged of weeds by the introduction of weeded crops, and it became richer through the use of abundant manures and remedial amendments. Dredging of the Joigne river bed and straightening works made the swamps disappear; drainage ditches, opened in the lower parts, completed the reclamation; carefully directed canals made it possible to use the water for irrigation. These operations made it possible to convert the marshes into good meadows and the formation of new grasslands. With better and more hay, it was necessary to increase the number of livestock and enlarge the buildings.

Attempts were made to crossbreed with the Schwitz breed to correct the defects of the Norman breed and to develop its lactiferous qualities, but they were unsuccessful, because the Schwitz breed is inferior to the Norman breed in every respect. This is one of the errors of M. de Kergorlay; but if he made it, it was because he wanted to follow the doctrines of Grignon too strictly. I will say the same about the rotation he first adopted. It is the Grignon rotation in which, contrary to all the accepted rules, one cereal is followed by another. But in spite of all the influences, as an intelligent man, M. de Kergorlay ended up adopting a rotation which is much closer to the one in the North and which is much more rational.

With regard to the horned cattle of the Norman breed, after having tried to improve them by speaking of the scbwitz, he tried the durham, and I believe that here he is more in the right. The Durham, whose forms are perfect, can very well rectify the defects of the Norman breed; but must not the Durham, the highest expression of the butchery type, alter its dairy faculties? M. de Kergorlay himself recognises this, and I am perfectly in agreement with him. If the Normans want to remain the leading producers of butter, I do not believe that they should cross their breed, the greatest butter-producing breed known, with the Durham, which is, after all, only a meat animal.

In spite of the mistakes made at the beginning by Mr. de Kergorlay, errare humanum est, the transformations he has made to the Canisy estate are a great agricultural achievement that can be cited to all farmers as a model to follow. This example proves what perseverance can do when it is strengthened by knowledge. The results of this operation can be found in the memorandum published by M. de Kergorlay himself, when in 1859 he competed for the premium of honour.

In 1835, at the beginning of its operation, the Canisy estate was rented with great difficulty at the rate of 60 francs per hectare. The operating capital, including livestock and furniture, amounted to 200 francs per hectare. In 1853, the rental price was 100 fr and the amount of livestock and furniture 600 fr per hectare. The increase in income is therefore twice as high, and the increase in working capital three times as high as when the present owner took possession.

What proves even more the good condition of the estate are the yields obtained. In 185Î, wheat yielded 27 hectolitres per hectare, barley 51 hectolitres, rye 33 hectolitres, winter oats 44 hectolitres, buckwheat 31 hectolitres, and beet 50,000 kilos. In the same army, wheat was sold at 13 fr. 83 per hectolitre, barley at 7 fr. 60, oats at 7 fr. Ci, buckwheat at 7 fr. 77 and beetroot at 8 fr. 07 per 1000 kilos. All these prices, especially those for wheat and beet, are relatively low. Such results justify the honorary award that the Canisy estate won at the Saint-Lô regional competition for the Manche department.