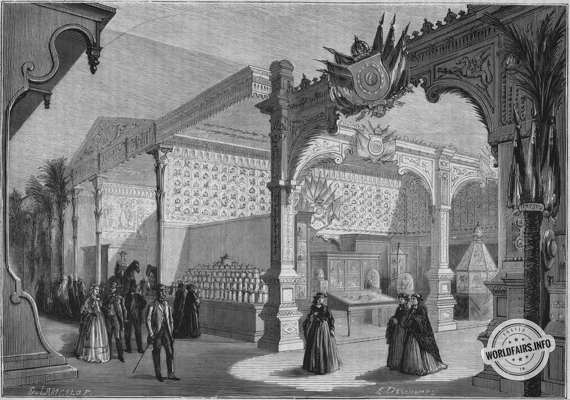 When, after having studied the Brazilian exhibition, one looks back at the unfavourable conditions in the midst of which it was organised, and considers that for three years the country, absorbed by the need to avenge the insults done to its national self-love, has been waging a difficult war against enemies protected both by the ramparts provided by nature and by the difficulty of military operations in an almost inaccessible region, one conviction is formed: It is that Brazil is called to a magnificent future and that the day will come, less distant than one might think, when this empire will count among the first nations of the world.

In sector XIV, which is entirely devoted to America, the richest exhibition is that of Brazil. There is little room for industry, not that some of the products made in Rio, Bahia and Pernambuco are inferior to their European counterparts; we noticed felt and silk hats and women's shoes that one would readily believe were purchased from the best Parisian suppliers; in the machinery gallery there is a collection of leather goods that is perhaps the most beautiful of all those on display at the Champ de Mars. But for several years to come, the Brazilian industry will only supply a part of the local consumption; we would even say more: it is difficult for its prepared leathers, hats, candles and fabrics to find outlets on foreign markets. The cost price is against it; and, however interesting it may be to note the results already obtained, it cannot be denied that the true, useful, practical side of the Brazilian exhibition is not there, but in the products so rich and so varied from the soil.

At the top of the list is coffee. Brazil supplies almost half of the world's annual coffee consumption. Such a result is understandable if one considers that the coffee tree can grow in almost all parts of Brazil, as the average temperature of 20 to 25 degrees centigrade which it requires is found in most of this empire, which alone occupies one-fifteenth of the earth's surface. Brazilian coffee is not inferior in quality to that produced in Africa; and I shall surprise many a connoisseur by telling them that, most of the time, the mocha which they savour with such delight has been harvested a few thousand leagues from Arabia, in the provinces of Minas-Geraes or Saint-Paul. Moreover, experience has shown that the varieties known as Moka, Bourbon, Java, etc., tend to merge with the one usually cultivated in Brazil; and that after a short time there is no difference between the fruits of the one and the other origin. This was the case with the plants that the government brought from Reunion Island in 1857, as all the owners who cultivated them attest. The same phenomenon was observed, moreover, in Martinique in 1818; the coffee from Moka, introduced by Admiral de Mackau after a few years, no longer differed in any way from that previously cultivated on the island.

Everyone knows that the preparation process has a great influence on the quality of the product; the most common drying process, which gives the best results, consists of the use of terraces (terreiros) made of stone or any other similar material; because it is absolutely necessary that during the drying process the fruit does not come into contact with the earth, which would be very detrimental to its good quality. Once the coffee is dry, all that remains to be done is to strip it of its rind, clean it by means of ventilation and smooth it. These various tasks are carried out with the help of equipment whose primitive simplicity would be a great source of amazement to most of our European manufacturers.

To give an idea of the importance of this crop in Brazil, it is sufficient to say that the export figure in 1866 amounted to a value of more than 300 million francs; consumption in the country constitutes about one-fifth of the total production.

By giving a great prize outside the line to Brazil, together with Algeria, India, Italy and Egypt, the Superior Council of the Jury wished to reward the development given in these countries to the cultivation of cotton, and to recognise the efforts which have contributed powerfully to saving the industry from the disastrous crisis with which it was threatened in recent years. It is well known that cotton is readily available throughout Brazil; and yet it was cultivated on a large scale only in the northern provinces of Maragnon, Pernambuco, Alagoas and Minas-Geraes. But the disastrous war which ravaged the United States, and the consequent suppression of cotton supplies, having produced great demands for this article on the consumer markets, prices suddenly rose, and the crop, finding remunerative conditions, took a considerable extension. Not only was it maintained in the northern provinces, but it multiplied in those of Rio Grande in the south, St Catherine, Parana and St Paul. Here we must pay tribute to the government and to the society for the encouragement of national industry, which have contributed to this development by distributing seeds in profusion.

Brazil produces several varieties of cotton; most of them are long silk; the most renowned are those of Pernambuco, whose regular, thick, hard and strong threads have a beautiful brown colour, and those of Minas, which contain yellowish, long, regular, fine and shiny threads.

The cotton plant produces in all types of soil; however, those that are unsuitable for other crops and those that are close to the sea are preferable. The white, black, grey, green and yellow seeds, depending on the species, are planted in January, at the beginning of the rainy season. Maize is usually sown between the cotton plants. Harvests are usually made from August to December; but when the seasons are warm, it is not uncommon to have two or three harvests a year at different times.

The product of sugar cane, one of the main sources of Brazil's wealth, could have been better represented at the exhibition. Sugar cane, which grows naturally in the northern provinces of the empire, is also cultivated with advantage in the southern provinces. The best sugar comes from the provinces of Pernambuco and Bahia. The improvements introduced in recent years in the manufacture of raw sugar and in refining have greatly increased the quality of the products. In the sugar factories, the cooking process is nowadays carried out with the help of steam machines. As for the primitive almanjarras, pulled by horses or oxen, they are also beginning to be abandoned and replaced by beautiful mills driven by water and steam.

The exhibition shows us some very fine samples of Brazilian tobacco; that of the province of Bahia, in particular, is excellent and would rival Havana tobacco, if the planters took a little more care in preparing the leaves. The manufacture of cigars and cigarettes, as well as snuff, now forms an important industry in Rio de Janeiro. The number of factories is increasing every day thanks to the development of consumption both at home and abroad. The French administration buys considerable quantities of Brazilian tobacco.

Here are the diamonds, a small collection for the country which gave the Star of the South and which supplies the trade with the greater part of its precious stones. It is true that the wealth of Brazil is not there. See these samples of coal; they were extracted from deposits discovered in the provinces of St. Catherine and Rio Grande in the south. What are the exact situation, the richness of the layers? We still have only incomplete information on this subject. But the soundings already made, the gentle slope of the stratification and the similarity of the terrain, lead to the assumption that on the right bank of the Jacuhy River, there are seven million tons of coal at a depth that is insignificant in comparison with the coal deposits of Europe; it must be added that repeated soundings on the left bank of the river indicate that the depth at which the deposits are found continues to be 56 metres, beyond the bank.

Alongside palm and coconut oils, essential oils of various plants, and resins of more than twenty species, are the rubbers whose export, both in the raw and processed state, through the port of Para, amounted to 3,312,926 kilogr. in the fiscal year 1864-1865. The rubber tree grows abundantly in the provinces of the Amazon and Para, and preferably in swampy places. The rubber is extracted by means of incisions made in the trunk of the tree. First, a transverse cut is made a few feet above the root, deep enough to touch the woody part; then, perpendicular to it, a second incision is made in the entire height of the trunk. In order to make the liquid flow more rapidly, the tree is surrounded with ropes or lianas, which frequently causes it to die. The juice, which gushes out abundantly, fills the plastic clay containers adapted to the lower part of the tree within a few hours. It is then poured into other vessels of a different shape; after a short time it thickens and solidifies as the liquid part evaporates. In order to dry it completely, it is customary to expose it to a brazier, which, when kept alive with stems and plant seeds, gives off a thick smoke; hence the blackish colour that commercial rubber generally has. While it is liquid, it is shaped, by means of moulds, according to the uses for which it is intended.

For a long time the rubber was exported in a solid state, slightly hardened, and retaining its elasticity, until Mr. Henrique Antonio Strauss succeeded in preserving it in a liquid state without alteration, and without the necessity of preserving it entirely from contact with the air. Ammonia is now generally used in the Amazon province to preserve rubber in a liquid state. Strauss' process for solidifying rubber without subjecting it to smoking is also in the public domain: it consists in the use of alum.

The engraving in front of the reader will show that Brazil wanted to make a striking appearance at the Exhibition. The decoration of the façade is in excellent taste and is a credit to the architect, Mr. Chapon. The national colours of Brazil, green and gold, are found in all the rooms, and along the walls runs a border of tobacco and coffee leaves, for Brazil has telling weapons. From the very first days of its independence, the country understood that it was to agricultural work that it had to ask for its main wealth, to agricultural work that the citizens had to dedicate themselves entirely. The present exhibition proves that we were not mistaken; it is to agriculture that the young empire owes its present prosperity; it is to agriculture that it owes its future prosperity.