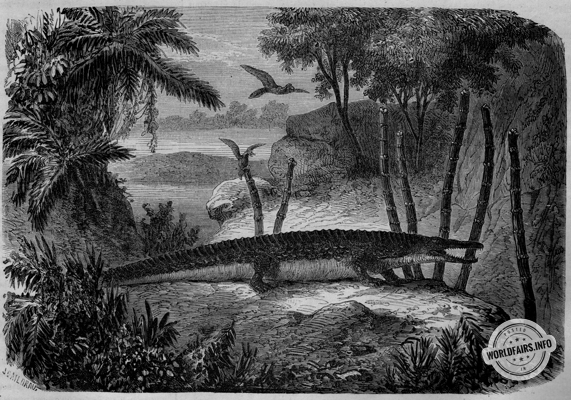 In the part of the Park devoted to Germany, and which surrounds the Palais du Champ de Mars between the avenues Suffren and Lamothe-Piquet, is an annex dedicated to Wurtemberg. Inside, a curious and imposing machine incessantly digests beech wood, and renders it into sheets or at least into paper pulp, reminding one of those other machines one sees in Cincinnati (USA), where pigs entering at one end come out at the other as hams.

It is not the Württemberg paper machine that we want to discuss today. We only had to choose it as a landmark, because the building that protects it offers on one of its sides a kind of upper shelter, in the background of which is drawn the antediluvian landscape that can be seen here reproduced.

What period of the earth's history does this strange picture indicate? What is that gigantic caiman crawling on the ground, or, if you like, that armoured iguana with a series of scales forming a huge saw on its back? What are these vampires, these dragons, that fly through the air or land on these bare trunks? What do these leafless trees, these unusually shaped plants on the right and left and in the foreground of the picture, and these waters and rocks themselves mean? Or is this landscape a reproduction of known places, and without being borrowed from the brush of a fossil artist, has it been composed with authentic materials?

Yes, this landscape represents reality; but thousands of centuries separate us from the earthly period which the artist, not of those times, but our contemporary, wanted to depict. We are suddenly transported to the geological period known as the secondary period. This name comes from the fact that it occupies the second rank in the succession of telluric periods. It was preceded by the primary period, which marks the infancy of our planet, and followed by the tertiary and quaternary periods. The latter is the one we are still travelling through today.

The primitive period is the one that saw the appearance of life on the globe, and the formation of stratified terrains, those that are called sedimentary, because they were formed by the sediments of the waters. The oldest sediments are themselves based on a primordial crust, composed of igneous or eruptive terrains, which were produced by fire and volcanic action as the others were by water. Water and fire are the two elements of the ancients that gave birth to our earth. Hellenic mythology seems to have guessed this by sharing the empire of this globe between Neptune and Pluto.

It is in the primary period, where the Neptunian and Plutonian phenomena acted with the most intensity, that life made its first appearance. It proceeded according to a progressive march, and on a plan which indicates a continuous development. The polypiers or corals, the molluscs, the crustaceans, of which the famous trilobites or three-lobed crabs, now completely extinct, form part, are the first beings which open the degrees of the animal scale. Then came the fish and the reptiles. The development of zoological life during the primary period stops at this order, which is then only just beginning.

From the point of view of plant organisation, the same phenomenon takes place. Algae, mosses, rudimentary plants, first appear; then herbaceous, cellular plants, ferns, lycopods, horsetails, but this time gigantic, so that the tree ferns of the tropics cannot be compared with those which mark, in the geological ages, the end of the primary period. These ferns are precisely those found in such abundance in the middle of the Carboniferous terrain, where they gave rise to the mineral coal. The atmosphere was then charged with more water vapour and carbonic acid than it is today, which was particularly favourable to vegetation.


In addition, the large continents had not been formed; The earth was everywhere composed only of scattered islands, archipelagos, in the midst of which a very high temperature prevailed, either because of the climatological conditions we have just mentioned, or because the earth, which had passed from a gaseous state to a liquid state, then to a pasty one, and then gradually solidified, still contained, under its frail envelope, enough heat of its own to warm the upper crust, the crust which separates the superficial part of the globe from the central hearth, which is always lit, as proven by volcanic eruptions and earthquakes. Today, this crust is too thick for the internal heat to be felt as it once was from inside to outside, we mean on the earth's crust itself and on the atmosphere that envelops it.

The times we have just mentioned make up the infancy and youth of the planet. The development continues during the secondary period which we are dealing with. The cryptogamous plants, or those without visible germination organs, will gradually give way to the phanerogamous plants, first the monocotyledons, then the dicotyledons. The cotyledons are the lobes that surround the germ emerging from the earth, and which are usually two in number in most leguminous plants and fruit and forest trees of our climate. In monocotyledons, on the other hand, the germinating seed is protected by only one cotyledon, as can be seen in all grasses, such as palms, bamboos and cereals.

The monocotyledonous plants that have already appeared in the decline of primary times, develop in secondary times. During this period, the dicotyledons also appear, including the conifers, such as araucarias, firs and cypresses. The fern family, so numerous in the previous age, is transformed in this one, or gives way to other species, such as the zamias and cycads. The latter also seem to give way to palms on the one hand and conifers on the other, and thus explain many metamorphoses.

From the dawn of the secondary age, the animal kingdom follows the same progress as the flora. The fishes become more and more abundant, and they present intermediate or transitional forms which unite them with the reptiles and birds. It is not that we are in the least in favour of the ideas of a famous naturalist, M. Darwin, who makes all beings emerge from the same germ, and then interprets their transformations by the effect of their own habits or by the influence of the environments in which they have each lived; but it cannot be denied that forms of passage often exist from one species to another. It would seem that the sovereign fabricator (if not that mysterious agent called life, which itself generates and animates the form), it would seem that the sovereign fabricator, operating on a plan known only to himself, wished to proceed by metamorphoses or gradual variations. The reptile we have before us (Belodon Kapffii) comes from the archaeosaurus or first lizard, which itself had some affinity with fish, and as for the flying reptiles that the artist has represented further on, one, the one that glides (Pterodactylus crassirostris), the other, which is perched on a trunk (Rhamphorynchus Gemmingi), they mark as it were the passage between the order of reptiles and that of birds. However, as the birds come into being, which will happen at the end of the secondary period, the flying lizards will not disappear altogether. They will have more than one distant representative, such as dragons, right up to the present day, just as the iguanas of today can almost be considered the great-cousins of the belodon of secondary times.

The teaching offered by the geological painting that we have insisted on reproducing makes us regret that the German artist who graced us with this painting did not establish others at the Champ de Mars Exhibition. One would have been pleased to see represented on the canvas not only a landscape of the primary period which preceded that of which we have just spoken, but also a landscape of the tertiary period, when life, in all its forms, took such a marvellous development, and the great quadrupeds were born. But what would have been most interesting to reproduce was the quaternary period, when all the plants and animals of today were born, and man the last. This explains how man is the most perfect of beings, at least until now, for it seems likely that geological evolution will continue after him.

The history of work, which the archaeological gallery of the Palais de l'Exposition unfolds before our eyes, tells us what primitive man was, antediluvian or fossil man, when he lived in caves, caverns, on the shores of lakes, and had at his disposal only crude weapons of scarcely cut flint or tapering bone, only the skins of wild beasts for clothing, only crude earthenware vessels, barely kneaded and baked in the sun, for domestic utensils. But the savage of today, the Redskin of the Americas, the Polynesian of Oceania, are almost everywhere still in the Stone Age, and that is why they are gradually disappearing before civilised man.