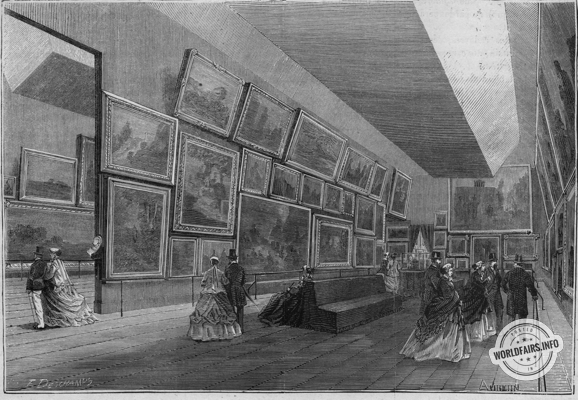 Every spectacle, whatever it may be, whether of nature or of art, awakens in us two successive impressions. The first, which we experience from the outset and which imposes itself, is an overall impression, so to speak, and, although it already has its raison d'être and its determining causes, it pre-exists discussion and criticism. It is the details, the study applied to this or that definite or distinct point, and the reasoned recitals of the general judgment which come afterwards and form the second impression of the observer and the referee.

In entering today, if you will, the beautiful and rich exhibition of the fine arts of Bavaria, we shall confine ourselves to the first impression and the general views.

In this Germany, which has advanced so rapidly in the pursuit of all progress, Bavaria, let us not hesitate to proclaim it, holds the sceptre of art, and Munich shines there as Athens once shone in the midst of the small republics of Greece. Munich is not, among the capitals of Europe, one of those noisy centres which abound with a multitude that is industrious above all, and commercial and bustling; but Munich resembles no other capital, and, in its encumbrance of ancient and modern masterpieces piously gathered together, this city has its incomparable elegance and its treasures which no wealth would pay for.

- The chisel, the brush, the lyre, all manifestations of genius, whether they shine to the eyes or sing to the ears, find in Bavaria and Munich sympathetic appraisers and enlightened judges; and these illustrious appraisers, these high judges are kings.
Alas, dear reader, could the same be said of many a more vaunted kingdom and many a flashier capital city?

Of course, all kings have the best wills in the world and the most virtuous desires, but whatever their fine qualities, it is rare that, in succeeding one another, they pass on their particular aptitudes and personal taste, the desire to pursue the same work and make it flourish. In this, kings are similar to most mortals, where, from generation to generation, we see bankers beget journalists or poets, and poets give birth to heads of divisions and offices. In spite of everything, we can salute three kings in Bavaria who, along with the crown, passed on the love and feeling for the arts, the taste for the just, the true and the beautiful, what I would like to call the supreme brilliance of the nobility of the mind and heart and their purest glory.

It was King Ludwig I who made Munich a true museum, full of wonders, a museum which is a service to the arts not only in Germany but in the whole of Europe, and, under this generous and learned impulse The kings Maximilian II and Ludwig II have since then continued to attract to their city an entire elite of artists who in the nineteenth century came to found the Munich School, in the sense in which those magnificent names of the Florence School, the Venetian School and the Spanish School were once understood.
This is why, among the emperors and kings who flocked to Paris from all over the world and visited our Exhibition of 1807, Ludwig I and Ludwig II of Bavaria, although modestly out of the way and under the veil of incognito, are truly among those whose presence was most appreciated. This Majesty adorned with white hair, this grandfather king, who was a poet and who remained faithful to the Muses, as our fathers wrote, is thus enhanced by I do not know what Homeric halo, at once solemn and charming; then, standing next to the august old man, this young king with long hopes, smiling and gracious, with a forehead that is already serious and inspired, has that deep gaze that lets us see the thought - The two kings, met here and there, at the Champ de Mars, at the theatre, everywhere, have struck a people like us, made to understand these unusual groups of poetry and royal grandeur under this double and twice venerable aspect.

I have just named the Munich school and pointed out the renaissance of the arts in Bavaria under royal protection. Our framework is too narrow for me to indicate here, other than by name, the illustrious artists who were the first to appear in this pleiad that is growing daily: they were Ziebland, Henri de Hess, Schraudloph, Strœhuber, Kœnig, Cornélius, Schnorr and many others. Then came Schwiser, Ferdinand Piloty, Andréas Muller, Horschelt, Kaulbach, Zimmermann, etc. I am quoting at random from my memories. Most of these painters and sculptors are, moreover, very well represented at the 1867 Exhibition, and it is thanks to the combination and variety of a host of excellent works, as original as they are superior, that one feels won over and convinced as soon as one takes one's first steps in this gallery of Bavarian fine arts, and even before one has been able to realise what a favourable impression one has made.

But I hasten to complain and say that if the paintings leave nothing to be desired most of the time, the same cannot be said of the guardians of these treasures, who look like intractable behemoths as soon as you ask them how you can offer you, dear readers, a few well-chosen samples of Bavarian skill and genius. But as there are more kind or powerful wills than those we have encountered so far, we hope to make you want to go and see these drawings and paintings, or, if you have already seen them, we hope to offer you some good and precious memories in these pages.

We have here before us all types of painting and, captured or interpreted in different ways, everything that can tempt the artist's imagination and palette. History, landscape, fantasy, easel paintings, intimate subjects, large and small canvases, miniatures, drawings, lithographs, engravings, sculptures in marble and plaster, on metal and wood, nothing is missing from this exhibition of the products of a nation, which could not be better, it seems, and more happily gifted for these elegant and delicate works.

I believe it was John Paul who said: "God has given the French the empire of the land, the English the empire of the sea and the Germans the empire of the air. "This is a saying that should not be taken too literally, but which, for the Germans at least, is really very just. They are not and never will be realists, and even in their most exact reproduction of physical nature and the material side of things, there is a great deal of idealism involved. They see everything through this pretty prism and this fresh mirage.

The peasants missing hemp of Mr. Albert Rappris, the oxen and sheep of Mr. Frédéric Voltz, the landscapes of Mr. Schleich and even his windmills, there is nothing that does not have, on the reality itself, this ideal and more or less melancholy tint. And yet these brave Germans are, from skin to soul, brave and honest burghers, and, by a singular aptitude of their feelings and spirit, they have discovered and as it were created the poetry of bourgeois life, the superior attraction of the small events of the common day, on the bench, in front of the door of the inn or the presbytery, and at the fireside on December or January evenings. In writing the poem, so bourgeois and at the same time so human, of Hermann and Dorothea, Goethe has created a masterpiece which has its equal only in the idylls of the Bible, and M. Arthur de Ramberg, who has exhibited four grisaille cartoons, illustrations of this beautiful poem, has entered wonderfully into the
of this beautiful poem, has entered marvellously into the interpretation of Goethe's genius.

One of the most remarkable paintings in the Bavarian exhibition is undoubtedly the one listed in the booklet under this title: The road between Solferino and Vallegio, 24 June 1859, and the artist, M. François Adam, took the trouble to assure us that he had observed on the spot. There is, indeed, in this evening of great battle, an air of truth which strikes the spectator keenly. These soldiers of all physiognomies and costumes, the dead and the wounded, cluttering up the ruts in the road or thrown in a jumble on the vans, are very real; then, in the arrangement of the scene, in the attitude and movement of the characters, the painter has shown a rare talent. But a Frenchman would not have spread in it a half veil of poetry which floats over the whole and which is due, so to speak, to the very temperament and nationality of the author. God forbid that I should reproach him for this! On the contrary, I recognise it as a quality, while noting the difference in mood and procedure between the two countries.

But I remember that this article is only an introduction, and, reserving for another day to walk you along the pictures or drawings, which call and hold the attention by charming it, of Messrs. Kaulbach, Piloty, de Ramberg, Baumgartner (a humorist!), Ebert, Gruenewald, Zimmermann, etc. etc., of a company of painters and sculptors, etc., from a company of painters who are energetic or graceful, delicate and piquant, or sombre and severe, I only wanted, in these rather long preliminaries, to prepare you to listen to me and follow me. Then, dear French readers, my compatriots, I would also like to protect you and myself once again from a prejudice that the Universal Exhibition of 186T is victoriously combating, namely that, everywhere and always, in all orders of ideas and knowledge, we have found everything and we know everything.