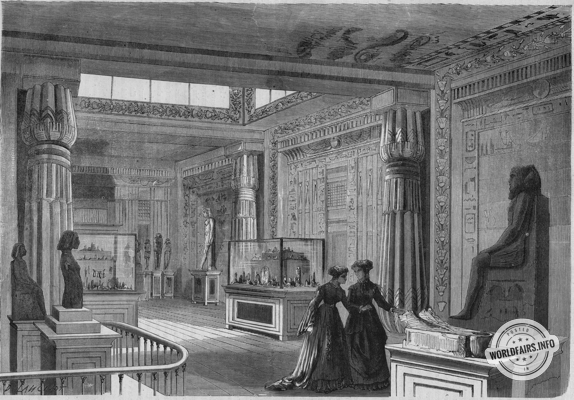 If there is a monument even more remarkable than all the others, among those with which skilful architects have adorned the eastern section of the Parc du Champ de Mars, it is certainly the Egyptian Temple. Situated precisely between this charming specimen of Turkish architecture in Asia, which M. Léon Parvillée has called the Kiosk of the Bosphorus, and the splendid Bardo of the Bey of Tunis, the work of M. Alfred Chapon, its columns, where the Egyptian Temple is located, are of the highest quality. Its columns, where the lotus flower blooms in capitals, this alley of sphinxes which guard it, and always seem to propose an enigma of which Cbampollion found the word, all its massive and pyramidal forms, with polychrome walls, where the history, the arts, the industry of ancient Egypt unfold in a series of paintings, In the midst of the graces and stylistic coquetries of relatively new peoples, Turks, Arabs or even Persians, it bears the severe and mysterious stamp of an antiquity long buried and as if lost in deep crypts, shrouded, like its mummies, in thick veils which science is now finally beginning to lift.

Built mainly to serve as a shelter for the collection sent from the museum of Boulaq, the Temple of the Field of Mars reproduces, although in very reduced dimensions, the plan, the general layout, the harmony of proportions, and even, to a certain extent, the details of the sculpture of those small temples named Mammisi by Champollion, and of which we find specimens in Denderah, Edfu, Abydos, and other places made more famous by the discoveries of the French scholars.

In order to give a more complete idea of Egyptian art, by popularising the three main periods, the contemporary period of the Pyramids, the old empire, has been represented in the interior of the Secos, while the outer walls of the same room have been painted with paintings of the new empire, contemporary with Moses. The decoration of the colonnade, more modern, was borrowed from the Ptolemies.

The interior view reproduced by our engraving is taken from the back of the Secos; the monuments it shows, however perfect they are in their whole and in the details of their execution, and although they indicate a very advanced civilisation, are nevertheless those of an epoch when Egypt alone had a history.

With the exception of the lighting, which in the original is sparingly used and which it would not have been without disadvantages to imitate here, the Secos is an exact copy of the tomb of the poor Kaa, inhabitant of Memphis, under the fifth dynasty. The only modification that was thought useful to introduce was the addition of columns, in order to show, next to the capital of the Ptolemaic temple, whose lotus flower has an open and blossoming calyx, the oldest column, with a capital composed simply of a closed button.

According to Mariette Bey, the mode of construction of the tomb of Kaa, where squared pieces, erected upright and crossed horizontally by other similar pieces, seem indeed to represent an assembly of beams and boards, is obviously a memory of the time when Egypt built its houses and even its palaces out of wood, "It is thus," he says, "of archaism that the architects who raised for Kaa the tomb whose main lines we reproduce in our temple were already doing so. As we study it, Egyptian antiquity thus seems to sink deeper and deeper and literally to be lost in the night of time. "

Austere simplicity still reigned in this remote era; the ceilings and steles that cover the walls of the Secos provide proof of this. One does not find there, as in the works of a less ancient art, the thousand deities and religious symbols that invade the tombs from the eighteenth dynasty. Here, nothing of the kind, all the subjects are borrowed from civil life, fishing, hunting, navigation. By seeing the sowing of seeds, the making of vases, the sculpting and transporting of statues, the building and launching of boats not very different from the dahabieh exhibited on the Jena bridge, it seems that one attends with the deceased all the operations that were most usual to him, and that one thus penetrates with him into the intimate meaning of his time.

Hieroglyphic inscriptions, as simple as the subjects to which they apply, help us to understand these familiar scenes. Interjections of the following kind, for example: Grasp the wood strongly! Be ready! Courage! are placed next to several workers at work. Above the head of a cook preparing geese, we read this invitation and promise: Work, and a goose will be given to you for your party!

All the statues and cases of mummies, all the objects contained in the showcases that line the interior of the Temple belong to the museum temporarily installed in Boulaq by the last viceroys, while waiting for the reigning Pasha to have the palace currently being planned built for the same purpose in one of the public squares of Cairo.

These are perhaps the oldest and most perfect works of Egyptian art. Particularly noteworthy in our drawing is the large diorite statue of the founder of the second pyramid, King Schufra or Chephren. It was found near the great sphinx of Giseh, in a building made entirely of granite and alabaster, at the bottom of one of the sacred wells whose water was used for ablutions.

Among the statues, we should also mention those bearing numbers 3 and 4; both made of wood, studied with great care and naivety, these two portraits, sculpted by a master's hand, were undoubtedly of great resemblance; their appearance is strikingly true.

In order not to leave the statuary before having examined the most beautiful samples, let us pass in front of the two showcases placed in the middle of the room, to which we will return later.

Near the entrance door, in the right-hand corner, three statuettes of women, on their knees, with their bodies bent forward, in a pose that is as graceful as it is easy and natural, are kneading bread with the help of a roller. The models of these charming figurines can still be found today in Elephantine and Nubia. Next to them, one can admire the magnificent alabaster portrait, a little larger than life, of Queen Ameniritis, daughter of King Kaschta, and sister of King Sabacon. The name and titles of this queen, who played an important role in the affairs of Egypt during the Ethiopian occupation (25th Dynasty), are engraved on the grey granite base still adhering to her statue.

A few steps further on, the display case on the right shows on its four sides the jewels of Queen Aah-Hotep, wife of Kames, the last king of the seventeenth dynasty, and mother of Amosis, the first king of the eighteenth. According to Marotte Bey, "If one believes certain clues, it was at the very moment when Amosis expelled the shepherds and purged, after a foreign occupation of more than four centuries, the national soil of its barbaric invaders, that the patriarch Joseph became minister, not of the legitimate king reigning in Thebes, but of a conquering king who resided in Tanis.

Among a great number of rich bracelets, necklaces, diadems, unchained, rings with seals engraved in hieroglyphs, symbolic scarabs worked in precious stones or gold, shines by its artistic composition more than by the precious materials of which it is formed, a
The necklace was intended, according to the prescriptions of the ritual, to cover the chest of the mummies, which it completely hid, by clasping on the shoulders, by means of two heads of sparrow hawk in embossed gold. All these ornaments, flowers with four delicately blossoming petals, lions leaping in pursuit of antelopes, seated jackals, vultures and winged vipers, playing in the middle of inextricably intertwined golden cords, were joined by small rings welded from behind, and sewn to the cloths that wrapped the embalmed body.

Under n° 5, in the same showcase, is placed an axe with a handle of cedar wood covered with gold, cut with open hieroglyphs that reveal, for the first time, the complete royal protocol of Amosis. No. 6 draws the attention of visitors to a dagger with a gold blade and scabbard, whose pommel, shaped like four women's heads, is linked by a handle studded with triangles of lapis lazuli, carnelian and feldspar, with flowers, locusts and animal fights, inlaid in the blade and serving as a frame for the two curious inscriptions that cover it on each side.

The display case on the left contains about sixty objects classified in four categories, under the titles of religious, funerary, civil and historical monuments. Almost all of them were collected by Mariette Bey during the excavations he carried out at the Great Pyramids, Saqqarah, Myt-Ruhyneh, Abydos, Elephantine, Thebes, Karnak, etc., under the orders of the Viceroy.

Under the heading of religious monuments, he has assembled thirty statuettes of gods and goddesses in blue, green, grey, white porcelain, lapis, enamel, earthenware, serpentine, and bronze inlaid with gold; topped with lotus flowers, mitres, and solar or lunar discs; with heads of hawks, hippopotamuses, jackals, ibises, cows, cynocephalus; representing by their union, in the eyes of the priest initiated in all the mysteries of a cult with bizarre forms, the unique God, manifesting himself through his powers.

Among the funerary monuments: portraits of the dead, steles, ex-votos, symbolic utensils, executed by various processes and formed, like the first ones, of more or less precious materials, we notice an alabaster bedside sign of the eternal quietude of the blessed. Similar bedsides, with crescent-shaped points, are still used today, it is said, in Abyssinia and Nubia.

Two charming objects stand out among all those listed as civil monuments. Firstly, a small rectangular slab, 19 by 14 centimetres, bearing the number 359, on which a ram with four horns has been sculpted, a bas-relief with a model full of finesse and truth; then finally, and to finish, because if we wanted to mention all the pieces of real interest contained in this too small museum, it would be impossible to finish, a handle from a perfume box, a marvel, representing a naked woman swimming, with her arms stretched out in front. This type, so pure, so complete, of supreme elegance, can, something that will undoubtedly seem strange after so many centuries, be found far from its origin, in France itself, in Boulogne-sur-mer, among the fisherwomen of the lower town.