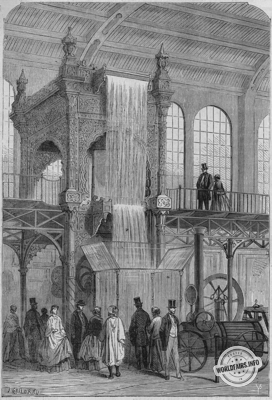 Isaiah said, chapter XXXV, verses 6 and 7: "In the wilderness shall waters spring up, and in the desert shall streams flow. The gloom shall become a true pool, the dryness springs of water; in the den of jackals shall rise grass, reed and rush. "

This prophecy was fulfilled by two exhibitors in Algeria with their drilling machines, which, more powerful than Moses' rod, provide the Sahara, the land of thirst, with real artesian rivers.

Two thousand five hundred years ago, in the same region, Herodotus tells us, the Psylles, a Libyan tribe, undertook, with their bows and arrows, a campaign against the sun, which was guilty, then as now, of devouring men and the soil itself, and, in their expedition, before they had found the sun within reach of their weapons, they were swallowed up by the sands carried by the Notus, the name given at the time to the wind blowing from the east.

In 1854, when our army conquered the Oued-Righ, one of the southernmost regions of the Algerian Sahara, the situation of the inhabitants of the oasis of Sidi-Rached was more or less the same as that of the Psylles of antiquity: "A few more days," said General Desveaux in his report to the Ministry of War, "and this population would have to separate, abandon their homes and the cemetery where their fathers rest. "But, instead of renewing a useless expedition against the sun - times had changed and human knowledge had increased - the French general "understood at that moment, as he himself tells us, the fruitful results that could be obtained from artesian works. "

In May 1856, the first drilling apparatus - the same one that stands in the south-west corner of the Exhibition Park, in the middle of an Arab camp, near the Porte de Grenelle, and which is represented in our engraving - was set up in Tamerna by M. Jus, and, on the 9th of June following, a river of 4,000 litres per minute gave life back to a region already affected by sterility, desolation and death.

Like the Psylles, the heroes of this expedition had to overcome enormous obstacles to cross the desert with heavy equipment and large supplies, but the Notas was merciful to them, and the neighbouring sands did not engulf them, probably because heaven was grateful to them for having understood that their weapons were to be directed into the bosom of the earth and not against the sun. It is true that Providence always rewards the efforts of human intelligence. The Universal Exhibition is the most striking demonstration of this.

Since this first success, other drillings have been carried out in the Oued-Righ, in the Ziban and in the Hudna, and at the end of 1864, the date of the last official documents, they gave 36 and a half million cubic metres of water per year.

The cubic metre of water, according to the evaluation of M. Laurent, amounts to one tenth of a cent.

Thus the war against the drought continues with perseverance.

We would have much to say about these prodigies, these miracles of modern science and industry, especially about their political and commercial results, but we must limit ourselves, for lack of space, to noting how much French colonisation in Algeria differs from that of other nations, which very rarely took into account the interests and needs of the indigenous populations.

The regions of Algeria in which, for the last twelve years, we have been pursuing the artesian drilling enterprise, are not inhabited and will never be inhabited by Europeans, because the insalubrity of the climate forbids them to stay there during the hot season.
Not a single artesian well has been drilled, perhaps, without the success obtained costing the life of a Frenchman. We say perhaps, because, in the reports, only the pearl of those who direct the work is mentioned; but if the leaders succumb, the workers are even less spared.

The obituary of the artesian drillings in the Sahara records, among the leaders, two foremen from the firm of Degousée and Laurent, and the second lieutenant of the spahis, Lehaut, who died on 14 May 1860, although he was vigorously constituted; but how can one resist five years of continuous work in the desert and under such a climate? Sergeant Dhem, one of the heads of the workshop, also had his health severely tested and often compromised.

Thus, in the Algerian Sahara, the French dig artesian wells, at the risk of their lives, and for the exclusive benefit of the natives. The inhabitants of the Oued-Righ and Ziban, of Berber origin, were grateful for this, for they clearly refused to take part in the insurrection of 1864; but the Arabs of the Hodna did not hesitate to pact with disorder, and those of the Sersou forced the detachment responsible for providing them with water to retreat, which is considered in the African army as one of the finest feats of arms known.

Whatever the gratitude of some and the ingratitude of others, we are still persevering in the difficult task of regenerating a people who have had their days of greatness, but who are now fallen.

We cannot dwell on the services rendered by Messrs Degousée and Ch. Laurent in giving water to the unfortunate Saharans; we will only add that, among the people who have taken a very active part in the success of the artesian drillings in the Sahara, we must name:
M. le général Des-vaux who, after having subdued the eastern Sahara at the end of 1854, came to Paris in 1855 to open negotiations with M. Degousée, and accompanied M. Laurent, at the end of the same year, in the first reconnaissance with a view to the immediate execution of the drillings. Since then, this general officer has never ceased to attach his name to this great enterprise;
Mr Jus, civil engineer, from the Degousée company, director of works in Algeria;
Mr. Artillery Captain Zickel, who, on the death of Mr. Lehaut, succeeded him as head of the Oued-Righ drillings.
Cooperators in the same work, these valiant pioneers of civilisation were to be associated in the same award.
The international jury did not know these titles. Whose fault is that?