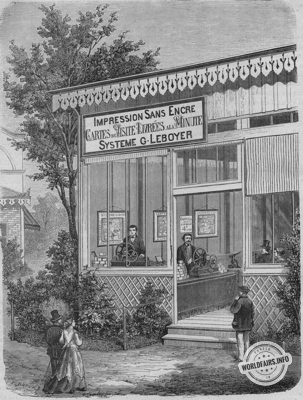 Those who see before their amazed eyes this little crank that discharges business cards at the rate of 112 per minute in the building whose drawing we have given, have no idea of the studies and experiments that it cost its inventor, nor of the immense proportions that this invention could take.

Do we know how much it would save in the whole system of intellectual nutrition? Ink thickens and clogs up the printers' characters; the rollers are melted by heat and hardened by cold. The paper must not adhere to the sticky characters, and therefore pull carefully and slowly, which requires an exaggerated use of motive power. Eliminate inking and its inconveniences, and you save two thirds of the cost of printing a book.

Before Mr. Leboyer, many attempts were made to eliminate inking. - Transfer paper has been known for a very long time, and is useful for various secondary purposes. But all papers of this kind used up to now are radically unsuitable for current and mechanical printing. Indeed, when the impression they receive is not sloppy and unfixed, they adhere so much, that the precautions to detach them make any speed of printing impossible.

The problem to be solved was therefore this: to find a paper that would produce a fixed impression, without receiving any adhesion from the printing. It was therefore necessary first of all to abandon the pasty substances universally adopted for fixing colours, varnishes, gums and resins, because of their adhesive appeal.

It is also in the chemical preparation of the paper that Mr. Leboyer's invention lies.

As for his machine, it is undoubtedly ingenious and very active, since the class of 59 thought it necessary to award it a silver medal; but there is nothing else remarkable about it than that it works by hand with the speed of a grinder's wheel. The printer's work is complete, but the mechanic's work has barely begun. It remains for Mr. Leboyer to enlarge the proportions of his machine to make it suitable for all printing purposes, by giving the apron the dimensions of an ordinary printing sheet.

Mr. Leboyer is a modest provincial printer, who was led to his invention somehow, and probably to satisfy the demands of his clientele on New Year's Eve. Be that as it may, when an idea germinates in the head of a man, that man becomes his slave. Since 1858, Mr. Leboyer has not ceased to be dominated by it; and God knows the number of fruitless attempts against which his perseverance has had to struggle! Sometimes it was the machine, sometimes it was the paper that discouraged his efforts and his hopes. Finally, in 1863, he had found it; but it took another two years to get the machine up and running; and it was only at the end of 1865 that the operation began, and in the modest conditions in which we still find it.

The present operation is based on two machines: 1° The card machine, which prints a hundred cards in 50 seconds, and which makes with the same ease the most complicated business cards in several colours, i.e. 7000 cards per hour; 2° a flatter machine which is used to print letterheads and circular letters, with the stamping of letter paper, in black or in colour, with a speed of 1500 sheets per hour.

I have seen with my own eyes a letter of convocation composed and printed in 700 copies, in less than eighteen minutes, on a single page, of course.

Mr. Leboyer's invention, though reduced to the modest proportions in which it functions today, has already rendered important services, and, unlike many other industrial advances, it is the worker who has reaped the first benefits. With the help of this printing system, he can produce much more, faster and with much less fatigue. The woman and the child will find a job in line with their strength, and, at the current price of methods, earn three or four times the salary of a robust worker.

This is why we call the attention of the jury of manual work, class 95, to the invention of Mr. Leboyer. For this ingenious little machine, in its present state, must above all benefit manual labour. And the worker must have understood this, since the inventor, in the last year, has sold two hundred machines, a fact without precedent in the annals of typography.

As for me, I do not doubt the possibility of enlarging the inkless printing machine to the proportions of the largest printing sheet. Mr. Leboyer is working on it; but if he had the help of an expert mechanic, the result he hopes for in three years would probably be obtained in a few months. For the unknown part of the problem has been completely cleared up; and the rest is no more than a secondary difficulty of mechanism.

We shall then have newspapers printed at the rate of 7,000 per hour, and books which will cost half as much and can be distributed in thousands of copies, thanks to their low price, provided that the Minister of Public Education continues to make us citizens who know how to read and who like to learn.

The principle of printing without ink is now established, thanks to M. Leboyer. By the public tests that it has undergone at the Champ de Mars, since the opening of the Exhibition, it is easy to understand how important it would be to apply it to the great printing house.