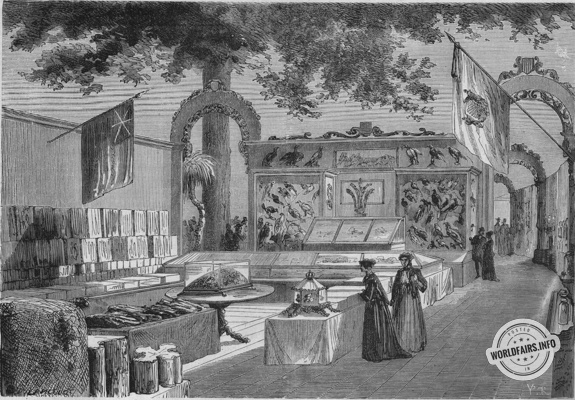 If, while browsing through the group of English colonies, you are struck by a pile of cotton that forms a real fortification: it is Victoria. If you notice that among these bales are samples of magnificent wool, it is Victoria. If you see behind it gold, lots of gold, wines, fabrics, trophies of Boomerangs, sagaies at the door, it is still Victoria. There are woods, birds, embroideries, cashmeres among all this; it is still, it is always Victoria!

Yet Victoria, the former Port Philippine settlement, is the youngest and, in terms of area, one of the smallest colonies in the Australian group, but it is gold country! From the point of view of commercial expansion, it is unquestionably the first, second only to India,...

because it is the land of gold. It produces gold, so it is a very modern creation; it is contemporary! It produces gold ... and it has grown as if by miracle. Everyone still remembers, in the other colonies of the Australian continent, having seen the great harbour of Port Philipp, - today the active centre of the world's commerce, - then unknown and criss-crossed by the pirogues of a few miserable savages... Victoria is the land of gold!

Victoria forms the S. E, the southern tip of the continent which juts out towards Tasmania; it lies precisely S. of New South Wales; so we must find in its exhibition a large proportion of similar objects. This is what happens with precious woods. We recognise Eucalyptus, Callibris, Acacias of all colours, black, white, red, and Banksias brown, grey, yellow, red. Like its elder sister, we see magnificent leathers, silks, wines, and sugars; but what we encounter above all is a special mineralogy.

In the first rank, gold in all its gangues, the rock of gold in all its forms; in the first rank, the gold digger who has brought down to the second the squatter, the ancient aristocracy of this half-wild country. The squatters are the first occupants of this virgin and so fertile soil, but they did not enjoy their absolute power for long: hardly two years had passed since the first had opened the roads, the gold mines were discovered, and the towns, the markets rose on all sides. The squatter, on the other hand, has no need of all these things of luxury and civilisation; he uses the soil in the state in which he finds it, he places his cattle on it, and they thrive and multiply in the natural meadows.

Victoria is, in fact, the land of open forests, a landscape special to Australian countries and which dominates in this colony: this open forest is characterised by the Eucalyptus or lied Gum, red gum trees; and the Maccas or Silver Wastle. These trees grow very spaciously and are provided with a very short foliage; the result is that the forests, far from reminding us of the shady massifs of our countries, let the sun shine through widely and allow the soil to receive all the atmospheric influences. Therefore, these unshaded forests, whose trees turn towards the sun not the flat but the edge of their leaves, present a soil generally covered with a bushy grass: It is the aspect of a well cultivated park; but, at the same time, it is the monotonous repetition of it during immense spaces, because the country is flat, uniform and without water.

We have, in our regions, some forests which remind us of this order of phenomena: they are those where the oak alone dominates and where, as a result of the weak shade given by the rare leaves of this tree, the ground becomes grassy and is covered with abundant vegetation. Our Scots pine forests would also be of the same type, if the presence of resinous needles, covering the ground with a sort of varnish, did not prevent the growth of a large number of plants. It is the Victorian squatters who send us the splendid fleeces of the Exhibition; they have more than eight million sheep to skin at once! But, after this short excursion into agricultural facts, we must return to the mines.
The mines! All of Victoria is there...

First and foremost gold, we said. But the colony is richer than that: it has gold, but it also has silver. It has more than that: it offers deposits of tin, antimony, iron and coal. What more do we want?
Copper? It has some near the Thomson River. Molybdenum? See Yackandaudah.... Manganese? It is found in ten places. Lignite, coal, slate, magnesia? Do you want diamonds? Victoria supplies them too; go to Beecheworth and you will find your business. Ask, be served! The wonderful country of mines provides everything...

At the moment, man is only looking for gold. Gold is enough... The surface of the colony comprises 86 thousand square miles, of which at least 50 thousand miles are occupied by gold-bearing rocks. A small, very small part of this immense surface has been explored, we will not say exploited, for, let us not forget, the gold country is equal to the surface of the whole of England. Gold is found not only in the quartz veins and alluvial deposits which result from the action of air and water on the debris of these rocks, but also in the clay itself, and the numerous samples of native gold bear witness to this. It is not beautiful: in truth, no! I know of nothing uglier than native gold with its irregular old cast appearance, without blisters, and its dull, greenish colour....

The real search for gold is no longer done by hand and by washing the sands as in the primitive days of discovery, when, with a pickaxe and a wooden stick, the miner made his fortune in a few days. Now, powerful machines, of which we see specimens in the gallery of machines, pierce the rock itself, - and it is hard! it is quartz, - crush it into impalpable powder, wash it, work it and bring back the gold to the owner of the establishment. This is a peaceful, non-strenuous, continuous, non-jolting work, which always works impassively like the machine that produces it, and which gently enriches its owner.

Do not believe that stones collected from the surface of the earth are crushed in this way: nothing.
Quartz is fetched from 570 feet below the surface, and 30 barrels of it must be crushed to extract 160 ounces of gold! These are not the kind of games you play with a pickaxe and a sack: as we have said. So you have to be rich in Europe to set up a gold machine in Australia. And yet, the tub and the cradle are still used by the poor miner, even on the oldest deposits or gold-fields! - and he who discovers new deposits is glad to be able to get hold of these primitive tools,... he does not always find them.

Everywhere you can see the Chinese scraping the earth on the slopes of hills and digging in the abandoned excavations of alluvial deposits to get to the gold ground, if he is not rich enough to buy a horse and a puddling machine. Let's face it, though, the cradle and the cradle have made many an early miner rich. Twelve to fifteen years ago, the miner was a man in a red woolen shirt, bent over a pool of water and washing sand in his wooden or tin dish. In those days, the hillsides were covered with grass, the tall trees provided light shade, the ponds and swamps were not all full of mud: the parrot, the cockatoo, the kanguroo, played around the emigrant...

Today the scene of the work has changed. The forests have disappeared, the hills have been turned over and over, dug up, torn up, showing their white-yellow, red and brownish sides. The railways, your macadamized roads, the streets, the houses, the municipal buildings grow in the plains and ravines, or dominate the hills.

The thirst for gold has passed through here!