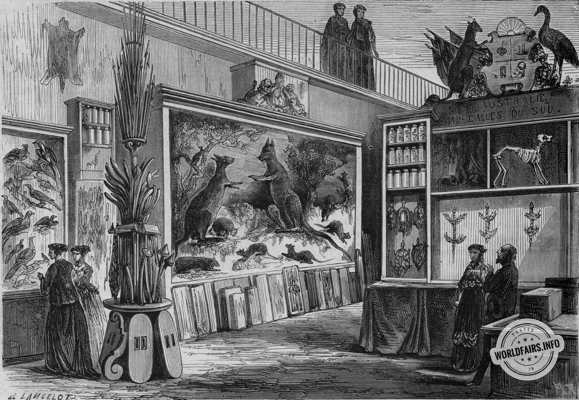 Behind the turtles and flasks that can be seen in the middle of our engraving are other flasks filled with earth, sometimes yellow, sometimes red, sometimes grey: next to them are others containing coarse, sharp-edged stones. All this is very vulgar, very bare, very uninteresting.

But stop, walker, stop for a moment. This is the land of gold. This is the quartz that contains gold! Everything here sweats gold! Everything relates to this vile and precious metal! Turn around and look! Here are three hundred and fifty thousand francs of gold, there, before your eyes! And all this passes in a shimmer in front of this little glass house-like window, in front of which half the visitors do not even stop.

Native gold is not beautiful either! You have to know it to recognise it.... you have to guess it in order for it to seduce the imagination, because the sight of it does not seduce the eyes. All that can be seen under the little glass house is a score of cut crystal beakers into which a small quantity of greenish, lustreless material has been deposited, resembling yellow castings, and bearing no resemblance to the name of gold dust which the magi have imposed upon it. Far from resembling what we call gold dust to put on the writing - a powder which is only a yellow mica - the other, real, preserves the trace of an obvious natural fusion, it is not a powder, it is shot.

Above the sebbles a bar of gold, roughly melted, next to it a thin plate of the same metal, shows the crowning achievement of human work on this precious material. Already it is becoming civilised! Passed between cylinders bearing the necessary imprints, or exposed to the blows of a pendulum, this blade, which has received the thickness of gold coins, is shown cut into blanks or rough pieces which will pass under the pendulum a second time and return soverings or napoleons, piastres or dollars.

Such is the work of coiners in its simplicity.

But since we are talking about gold, let us stop for a moment to consider a rather curious phenomenon which has just occurred under this modest window, several times since the gold shot was poured into the crystal sebbles, the guards have noticed that these sebbles broke, sometimes alone, sometimes when they put their hands on them. What is the cause of this phenomenon? Is it the high density of the gold? This is probable. However, the exhibitors did not load each beaker: it is hardly if the bottom seems covered with the precious material, and this is enough to break these transparent bowls.

It is because the density of gold is enormous. We do not think enough about it when we handle this singular metal. It is such that if we imagine a bath of liquid gold, the iron will float in it like a piece of poplar on the surface of the water. We are surprised, after that, that with such a density the weight under a small volume is considerable and breaks the crystal beakers!

While we are in Australia and in this New South Wales, which is the starting point of the conquest of this new continent by the convicts; let us remember that its origin does not go back to a century. Let us admire this mother colony whose primitive population was one million unfortunates, and whose successive daughters are called Tasmanje, New Zealand, Victoria, Queensland, etc., that is to say, a space as large as half of Europe. Let us not forget that the thousand colonists - drawn from the prisons to populate this continent which was to be their tomb - produced or attracted there two million compatriots, without counting the foreigners and the Chinese!

All this is phenomenal, and yet, we are obliged to admit it, these countries and their productions are little known to us Frenchmen; but we must not lose sight of the fact that not only do we not know geography, but we do not travel. Unless we are trading in wool, few people in our country are interested in Australia. As for gold dust, well, we had a moment's enthusiasm for California, but that was at first, and then our character took over. Well, not everyone succeeds.... It's not worth going there. And just didn't go. It was too far away, and you had to go out of your way!

What a contrast! After California it was Australia that the hardy Saxons recognised as auriferous; their tenacity, their cold enthusiasm held out: they persevered, they persevered again and soon made themselves the gold suppliers of the whole world. Powerful machines have been invented, assembled and perfected; they have crushed rocks and mountains to wash away the ashes; they still walk with that convinced and cold step which no obstacle stops and which always arrives.

Here is the trophy, on the left, of human weapons in the Australian country: above the assegais, in the middle the head-brackets and boomerangs, below the shields. Let us take a look at these products of the industry of these savages, and notice that the country is absolutely short of reeds or of wood of stiff and rapid growth, for the shaft of all spears or assegais is made of wood more or less twisted and painstakingly dressed with a knife. Mushroom puzzles are likewise roughly worked and made of very hard wood; but what excites the greatest interest are the boomerangs which abound in all Australian exhibitions.

The construction of boomerangs is very simple. Imagine a paper knife 60 centimetres long and slightly curved, not on the flat, but on the cutting edge. The curvature is not at all uniform, some are more curved, others less so. Some even form a very open angle rather than a curve, others have, at their end, a part widened into a lens 15 centimetres wide in the same plane as the whole instrument.

All this is very simple; but what is much less so is the way in which this instrument is thrown and used, a way which so confounds all plausible explanations by our most highly regarded scientists that they say nothing of the discovery and leave it to the indigenous Australians who alone know how to use it. A troop of parrots is in sight, and there parrots and parakeets are more common than pierrots and greenfinches at home, the savage advances slowly; the boomerang is thrown, it follows a horizontal line half a metre from the ground. Suddenly, after having travelled about fifteen metres in this way, it suddenly rises without touching the ground, climbs thirty metres into the air, caroms the branches of the Eucalyptus tree on which the birds are placed, kills or stuns a dozen, and describing a retrofugal parabola, as we say in billiards, comes back to fall at the feet of its owner, who has remained immobile.

This is simply insane, and yet it seems to be true, because all travellers agree on it. An Australian, in bourgeois style, even came and manoeuvred one of the boomerangs that were there at the Exhibition itself. In spite of the small amount of space available, the marvel was accomplished, the paper knife went off whistling, rose up to the roof and came back down to fall right at the feet of the savage against the windows and the rest! It was as if the boomerang was a well-trained bird. There were no parrots on the ceiling of the palace, it's true, but they could have been put on.

As for the shields, they are made of very light, porous wood, quite similar to our willow. The holes that Ton sees are underneath: they do not go through the whole thickness and form a kind of handle that the man holds in his hand. There is yet another weapon, which resembles an enormous shuttle, pointed at both ends and which Ton grasps by a handle in the middle: yet another which reminds one of a bent arm or the letter L reversed; it is all made of iron wood: it is like a puzzle, perhaps a variety of boomerang; there are .... but there are too many of them, right down to the small stone axe whose flexible handle is three metres long and which spades into the earth with a very recommendable force.

Let us add, for the curious, that the platypus, that famous duck-billed quadruped, the apteryx, a bird whose feathers are hairs, and many others, are inhabitants of this curious continent where the trees give no shade, because their leaves present to the sun their edge and not their flat, where all the conditions of our nature seem to be turned upside down and inside out as if for pleasure. Hence it follows that the forests of gum trees and eucalyptus provoke the most justified astonishment, offering no shade and allowing the rays of a scorching sun to reach the ground.

As for the usefulness, we must point out, in conclusion, the magnificent leathers, the splendid woods of which we have already spoken somewhere, and the beautiful coals. There is indeed enough here to make New South Wales a State of great power and prosperity in the future.