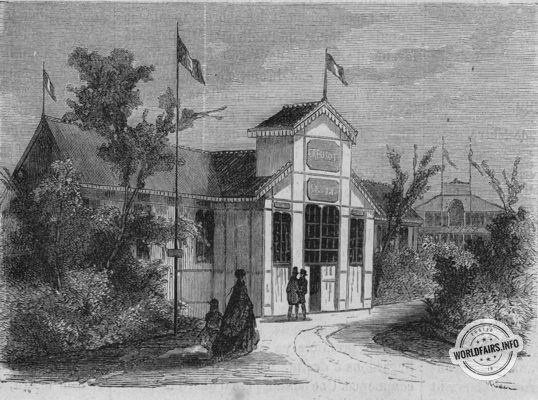 On approaching the garden of the Champ de Mars by the University gate, and taking the avenue known as the Avenue de Bourgogne, which begins at this gate, one immediately meets on the left a building of happy construction, where the name of Creusot is inscribed. This factory is so important that, like some of its rivals, of which we shall also speak later, it had to open an exhibition in the Exposition itself.
If we look around the building, we see the following inscriptions:
Coal mines, iron mines, foundries, forges, construction workshops.

These titles confirm the great number of specialities to which the great factory responds, and the necessity in which it was seen to group its exhibition under the same roof, so that the visitor could judge both the details and the whole.

The door is open to all; let us enter.

- A calm day is spread over the room, whose severe but tasteful decoration perfectly meets the purpose we have set ourselves.

To proceed with order in our visit, let us first take a look at this beautiful plan in relief which we have before us: this is Le Creusot, today a town of 24,000 souls, which contained only 3,000 in 1837, when Messrs Schneider took over the management of this establishment. The large factory is there in its entirety with its coal mine, its various furnaces and its workshops. Around it is the town proper, with its buildings and squares, the town to which the factory alone gave birth. The railway track runs parallel around the workshops, and the telegraph wires line up above the track. The rail and the wire will join the branches of the railway from Chagny to Nevers and Moulins, themselves detached from the great Paris-Lyon-Mediterranean line. We are in the department of Saône-et-Loire, near the Morvan, on the borders of old Burgundy, not far from the Canal du Centre.

Under part of the town and the factory of which we have just seen a miniature plan, lies the coal mine, an underground city, a dark and sunless town, which the miner inhabits during half the day. A plan in relief, of which it was an ingenious idea to remove the upper part, or the land which hides the coal, shows us the conformation of these deep abysses. We can see the antediluvian valleys in which the plants that produced coal thousands of centuries ago were moulded. Then, in the midst of geological cataclysms, sandstone, slate and sand came to cover with their mantle these primitive forests and peat bogs, which man would one day find and exploit so usefully.

Not far from the plan in relief of the coal mine, a drawing of a borehole shows us one of the most remarkable works that have been carried out in the art of mining, it is the borehole undertaken at the place known as the Mouille-longe, and which went down beyond 900 metres to find the coal. Next to it is the reproduction of another work no less interesting: a wooden dam or spherical clamp built in a gallery to push back the water that was hindering the exploitation. Various plans attached to the wall, showing, among other things, the beautiful installation of the Saint-Pierre and Saint-Paul shafts, from which two thirds of the coal supplied by Le Creusot is extracted today, complete the information relating to the coal mine.

It is not appropriate to leave the raw materials, which we will see so surprisingly transformed in a moment, without saying a word about the Mazenay iron mine. It is close to Le Creusot and, like the coal mine, forms one of the properties of the factory, to which it is linked by a 30 kilometre railway. Geological and geometrical plans show the connoisseurs the conditions of this new underground deposit, while under a special showcase are exposed the samples coming from it. Le Creusot also shows us specimens of its coals, and of the metallurgical coke which it produces by mixing its coals with various French coals of fatter quality. Similarly, the iron ore of Mazenay is not the only one used by Le Creusot; the factory spreads out next to it the ore of Saint-Florent (Berry), and those so renowned from the island of Elba and from Mokta-el-Haddid near Bone (Africa).

We can now follow with our eyes the different brands of cast iron and iron made by the factory using the coke and ores just mentioned. Here, the cast iron good for moulding; there, the cast iron intended for the forge. Further on, the iron, of which seven numbers, progressing gradually, take us from the most common type to the purest, most perfect type, No. 7 from Le Creusot. One of these types, No. 4, is the one that the English, with their colourful commercial language, repeating the superlative par excellence three times, call the best, best, best. As for the famous Swedish irons, they are no better than No. 7 from Le Creusot.

The iron, hammered, tormented, twisted in a thousand ways, shows no cracks or breaks in its grain, and has everywhere victoriously resisted the tortures to which it has been subjected in order to testify to its remarkable qualities.

We must be grateful to Le Creusot, especially in these times of warlike ideas, for not exposing any cannon, any shells, any armour plate. We will only have too many of these formidable artillery devices to mention elsewhere. But the great factory displays with a certain pride its magnificent marine machines, with recumbent cylinders; its beautiful locomotives all painted, ready for the race, and next to it an imposing mining machine for the extraction of coal or ore; finally, as a specimen of adjustment tools, the Creusot exhibits a large drilling machine, which reminds one of a crane by its dimensions. Various plans, which can be consulted all around the room, reveal other types of machines and iron bridges, also supplied by Le Creusot. On a special note, we salute the relief plan of the bold bridge at El Cinca, and the plan of the new forge at Le Creusot, a marvel.

The director of the unrivalled establishment, whose main exhibits we have just outlined, did not feel it necessary to confine the confidences he owed the public to this point. Next to the material is the spirit that tames it, next to the tool, the worker. Mr. Schneider wanted to tell us how he had made man in order to make iron. From the whole of a new exhibition of the products coming out of the schools of Le Creusot, schools for boys or girls. This was not the least interesting aspect of the Creusot's performance in the great tournament on the Champ de Mars, where it won so many medals. One would think oneself transported, in the presence of these new showcases, to the very curious exhibition which the Ministry of Public Education has opened in the very palace of the Exhibition (gallery of the liberal arts), or in the salons of the rue de Grenelle.

What else can be added to all that has just been said? Le Creusot employs ten thousand workers, pays them well, houses them, educates them, cares for them when they are ill. With this moralized, disciplined staff, Le Creusot manufactures more than one hundred thousand tons of iron, one hundred million kilograms, half of which is delivered in railway rails, and builds more than one hundred locomotives per year, some of which have been sold to England. It is estimated that the value of all the products produced annually in the Le Creusot construction workshops alone is fourteen million francs. The products of the forge still exceed this figure, and amount to twenty million. All the countries of the world are dependent on the great factory, and it is with a glorious bundle of flags that it signals to visitors the names of its client nations: these are the flags that we must now conquer.

In the presence of such results, the mind remains struck by the whole as well as by the details, and one wonders how the director of this beautiful factory, the most complete of all those that modern metallurgy has erected, could find leisure to direct the debates of our Legislative Body with such brilliance.