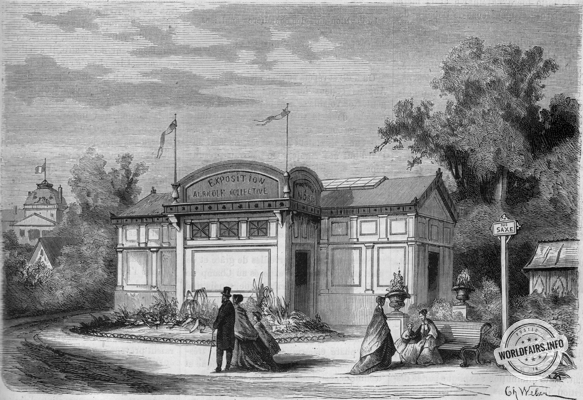 Among the departments which are constantly raising the level of our agricultural and industrial wealth, the North has tended, for some years now, to place itself in the front line. If Lyon sends us beautiful silks, the Bordeaux region and Burgundy excellent wines, the Seine-Inférieure and the Ardennes fabrics, the North gives us coal, alcohol, sugar, molasses, oil plants, fodder and vegetables, cloth, fabrics and wheat. Agriculture goes hand in hand with industry, and the production and rearing of livestock, which have become the focus of the agronomists of the North in recent years, promise to add to the wealth of this already fertile soil.

The agronomists of the North wanted to give the exhibition of their products an overall character that would bring out the results of their efforts and work. They got together to erect a vast building in the park, at the corner of Avenue de Saxe, behind the Spanish glacier, to which the Somme and several other departments have added annexes.

The organisation and layout have been directed with an intelligence for which the commissioners are to be commended. Each type of product occupies a special place where the samples of each exhibitor can be compared. This arrangement has the great advantage of allowing visitors to follow the progress of each species and to control the decisions of the jury. Doesn't it often happen, in fact, that an award-winning manufacturer exhibits products of a different nature in the same showcase? Which of these products has the jury awarded?

For example, in the compartment reserved for cereals, the owners of this crop have each brought their own samples. Thus, for sugars, alcohols, fodder plants, etc., etc., etc.

The product of northern agriculture that is of most interest today, and which is already rewarding with significant profits [agronomists who are convinced enough to give up large areas of land to this crop], is beetroot.

We know what serious reasons there were for creating an indigenous sugar. Beetroot, which the advocates of cane sugar claimed to be so low in saccharine and so expensive to grow, required only a little care and a little fertiliser. Today it has triumphed over all resistance. Far from impoverishing the land, it enriches it, and in a cold climate, without the help of the burning sun of the colonies, it produces a sugar that compares perfectly with the products of Martinique and Bourbon.

Thus, Mr. Desprez, from Cappelle, district of Lille, who obtained a gold medal for his beautiful products, submitted twelve samples from beets that he displayed in jars for chemical analysis. It was M. Viollette, professor of chemistry at the Lille Faculty of Science, who directed the operations, noted the results and gave them the authority of his signature. I will quote only three figures, a maximum, a minimum and an average.

It can be seen that, although it weighs less, sample no. 1 gives a higher proportion, which would suggest that, above a certain weight, the beet only acquires a small amount of saccharin, which is no longer in proportion to the amount of pulp.

The beetroot from which the pieces submitted to M. Viollette's analysis have been taken are exposed to a solution of sea salt and alum, which preserves them and enables competent men to check the results given by the skilful chemist from Lille.

As for sowing, it is, whatever the species, but depending on the nature of the soil or the manuring, from 15 to 20 kilograms per hectare.

In the early days of cultivation, beetroot was used exclusively for sugar production. However, since learned and successful research, the use of this plant has been extended. Official calculations show that the district of Valenciennes alone produced 151096670 kilograms of molasses from 1864 to 1866, and 953,520 hectolitres of alcohol from 1853 to 1866. During this period, the sugar factories consumed nearly 6 billion kilograms of beetroot, i.e. a third more than its production, because the immense plantations of this district, which in the past sent all their products to the sugar factories, now send a considerable part to the alcohol distilleries, and the large factories and refineries have to receive beetroot from the neighbouring districts in order to use their immense equipment. Nevertheless, and despite this reason for the slowdown in the sugar industry, the Valenciennes district has exported nearly 17 million kilograms of raw sugar in the last eight years.

The advantages of this plant are not limited to this. The pulp contains a considerable amount of nutrients. 700 grams of pulp are equivalent to two kilograms of hay, and it has been calculated that, based on what an ox eats per day, the district of Valenciennes could feed 100,000 oxen for four months.

Cattle breeding," said M. de Forcade La Roquette, Minister of Trade, on 18 April 1867, at the Poissy competition, "is enriched by these discoveries, and finds new elements of nourishment in the plant residues from the laboratories. "

Finally, beet itself produces a powerful fertilizer. This fertiliser is made up of what is called defecation scum. These are residues mixed with earth, debris, lime, etc., but which are very rich in nitrogen. In fact, M. Le Docte, from Brussels, notes that, despite the two-thirds of nitrogen taken up in the manufacturing process, the residues retain a considerable quantity, estimated at no less than 3 million kilograms per year.

The beet therefore returns to the earth in large proportions the nourishing juices it has borrowed from it. This discovery is all the more valuable as beet requires light, loose, deep soil rich in humus. It needs fertilizer, but it is not well suited to animal manure, and prefers the vegetable manure that its residues provide.

that they occupy numerous steam engines, of various strengths, and amounting together to nearly a thousand horsepower; finally that in ten years they have paid as a contribution to the maintenance of roads, 80,000 francs, while all other industries together paid only 90,000 francs.

Beet therefore occupies an important place in the agriculture of the North, and it is fair to name the agronomists and industrialists who contribute most actively to the development of the agricultural wealth of the department. They are Messrs Desprez, at Cappelle, who received a gold medal; Lepeuple-Le-couffet, at Bersée; Simon-Legrand (bronze medal), mayor and agronomist, at Auchy; Delloye-Lefèvre, at Iwuy, who obtained a silver medal for his remarkable sugar samples.

Finally, let us mention Mr. Kuhlmann, a manufacturer of chemical products, who exhibited animal black for the decolourisation of sugar.

I have placed great emphasis on the cultivation and use of beetroot, because the North has in this plant a fertile source of work and wealth for its large population; it should not be concluded, however, that cereals, oil plants, fodder plants, legumes, etc., are the object of less concern on the part of farmers.

The cultivation of wheat alone occupies a considerable portion of the department of the North and a quarter of the district of Valenciennes. If I often come back to this arrondissement, it is because the others are more industrial, this one is more specifically agricultural. Its production is more considerable. Thus, in 1866, the average production of wheat, per hectare, was, for the department of the North, 22 hectolitres, 66; it was 27 hectolitres for the district of Valenciennes.

Textile plants are exhibited by M. Dalle, at Bourbecques, who received a gold medal for a remarkable collection of flax; M. Porquet-Lefèvre, who exhibits dyed flax, prepared for linen, yarn, etc.; M. Dantu, at Sleene, March flax, May flax, with blue flowers; M. Massart, at Férin

It is still M. Porquet, from Bourbourg, who exhibits the most beautiful samples of vegetable plants, beans, lentils, potatoes (of which he gives fifteen varieties), and the best fodder plants: the competent men notice his seeds of lupin, alfalfa, clover.

Hops and barley, which are the vine of the North, occupy a fairly large area in this department. Hops are presented by Mr. Cœvoet-Schoduyn of Lille, and Mr. Bouret, of Steenwoode; barley, by Mr. Bigo-Tiiioy, of Lille; finally, the product of these two raw materials, beer, also has a place in this exhibition. M. Dornemann, brewer in Loos-lès-Lille, exhibits a charming keg, the shape of which I admire, but on the contents of which I am unable to have any opinion, not having been admitted to taste it. Mr. Dornemann makes Bavarian beer, which is sold in Paris under the name of bock-bier. This is a good big infidelity to the traditions of the northern brewery. There is hardly any comparison to be made between the strong beer of Munich and the light, sparkling beer of Douai and Valenciennes.

Tobacco is grown on an area of about ten hectares; it yields, on average, from 2400 to2900 francs per hectare. Twelve growers have come together to exhibit their products, and it is between these two figures that the annual production per hectare varies for each of these owners.

The fertilisers most commonly used in the North Department are: animal black, blood (used in refineries), animal manure, rapeseed cake, flax and, above all, beet detritus, all of which are indigenous fertilisers that do not require guano and other exotic agents.

It has been noted that, since 1836, the number of horses had remained almost stationary, but that that of oxen, cows, etc., was increasing, while that of sheep was decreasing. This decrease can be explained by the disappearance of the waste land, which in a short time will all be put under cultivation.

It remains for me to speak of coal, which constitutes a rather important production. From 1855 to 1866, the ten concessions of the district of Valenciennes (Anzin, Fresnes, Douchy, etc.,) alone gave one hundred million metric quintals of coal. Of this considerable sum, one twelfth is absorbed by the manufacture of sugar, which requires no less than three and a half quintals per sack, which gives an annual consumption of 1,300,000 quintals for Valenciennes.

This short review of the agriculture of the North will perhaps suffice to show, by the figure of wages, consumption and production, how important it is for a State to protect this source of public wealth, and how much good spirits must also be attentive to the complaints of agriculture, and seek in a wise economy of the active forces of our countryside, - money and manpower, taxes and recruitment, - a remedy for a state of suffering which I have not even wished to indicate in this article, but on which serious discussions have enlightened public opinion in the past.