Treatment of the insane in families - Austria 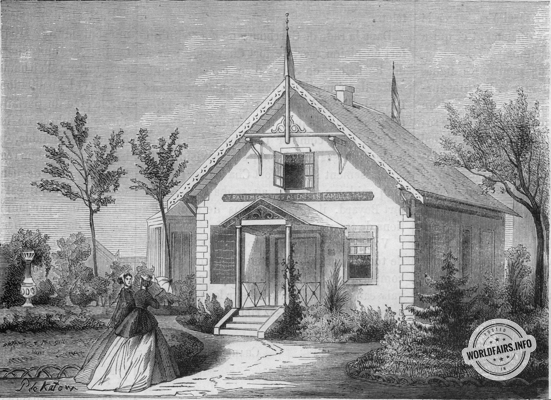 This house, exhibited by Dr. Jaromyr Mundy, from Moravia, is intended to show a special application of the treatment of the insane in families, according to the system practised in the commune of Gheel, in the province of Antwerp in Belgium. In order to understand its purpose, it is therefore necessary to have a prior idea of the regime in Gheel.

In this Belgian commune, which covers 11,000 hectares and has a population of 10 to 11,000, located in the centre of the Kempen, it has been customary for a thousand years to receive the insane in their families. A devotion in honour of Saint Dymphne, the patron saint of the insane, was the origin of this custom; but in the long run the institution has taken on a more and more traditional and scientific character, and the analysis of its principles, its methods, and its results, makes it possible to attempt to imitate it in other places.

The principles applied in Gheel, first instinctively and now consciously, are five in number:
1° Treatment within an adoptive family;
2° Free life in the open air;
3° Agricultural or industrial work, freely exercised, according to aptitudes and tastes;
4° A sympathetic social environment;
5° The high and vigilant direction of a well constituted administrative and medical service.

By virtue of these principles, a thousand lunatics are admitted to Gheel, in the interior of families, some in houses clustered in villages and hamlets, others in farms and scattered dwellings. There they live on the same footing as all the other members of the family and the commune; same table, same house, same clothing, same diet, and a better diet if the price of boarding exceeds the legal minimum (which is usually 65 to 70 centimes per day). The lunatic comes and goes as he pleases in the streets and in public places; he takes part in all the local entertainments and festivals; most of them usually work in the home of their boss, who has the title of fosterer or host. Every esteemed family in the commune is honoured to have at least one lunatic in boarding school; apart from the income, it is a token of public consideration. The lunatics themselves are so loved and respected that the children do not allow themselves any jokes or insults. The education of the whole country is done in a tone of consideration and sympathy for these unfortunate people (it is right to note that the regulations forbid the admission to Gheel of homicidal, suicidal, incendiary monomaniacs, and those whose madness would offend decency).

It is the case with human will and activity as with all forces: freely expanded they are much less dangerous than violently compressed. In possession of their freedom, the great majority of Gheel's lunatics are inoffensive; they are allowed to indulge in all their deviations and whims, as long as they do not harm themselves or others; and experience proves that there is no more effective way of promptly calming exaltations. If the fits become dangerous by their violence, the foster parents, aided by their family and neighbours, quickly and easily tame them; and for these cases they may, with the doctor's permission, resort to means of restraint, of which the straitjacket is the most common. If the crises become exceptionally intense and prolonged, they are taken to the central infirmary, which is equipped for accidental cases and has the most powerful means of therapeutic action.

As for the insane, who show themselves willing to escape (and this is a small number), it is sufficient to place light, well padded shackles on their feet to prevent their escape, without hindering their free movement through the streets and paths.

Thanks to the combination of these means, which constitute family patronage, the number of accidents is very low; cures are numerous, and life passes as smoothly as possible for those who are not cured: longevity is also very high.

This colony of lunatics, intimately mixed with the existence of a reasonable population, receives, without its knowing it, the best influences from nature, from the family, from society. The landscape is wide open in all directions, the air mild and refreshed by the sea breezes, the climate healthy; the patient enjoys the calm of isolation without being confined in solitude. The family surrounds him with care and affection; he is loved, and often very much so, by those around him; there are many examples of reciprocal attachments, true adoptions of the heart, and friendships that survive long after recovery. Finally, the commune of Gheel constitutes for these unfortunate people the most sympathetic social environment they could wish for. As they are a blessing for the country, which is enriched by their pensions (3 to 400,000 fr. per year), as this speciality is a legacy of a past ten centuries old, and as it has penetrated the spirit, the blood and the morals of the inhabitants, the whole commune protects them, watches over them, and any abuse is immediately revealed and denounced as an attack on the conscience and the public prosperity.

In addition, the administration and the medical service complete, by their daily vigilance and their attentive intervention, the action of nature, the family and society. A provincial commission and a local committee presided over all regulatory measures and monitored their application. A medical inspector (today Dr. Bulekens) presided over the placement of the insane and the direction of treatment; residing on site in the infirmary, he received the patients and observed them before distributing them. He was assisted by four doctors and four guards, each of whom was responsible for a section of the commune.

Such an organisation is unquestionably superior to the departmental closed asylums, and even to the nursing homes, where one tries in vain to mask, by the luxury of decorations and furnishings, the rigours, the troubles and too often the abuses of confinement.

After having acquired this conviction through long and repeated stays in Gheel and visits to most of the insane asylums of Europe, Dr. Mundy conceived the idea of a colony which would reproduce, as far as science and private initiative can imitate a creation of the centuries and of morals, the principal characteristics of Gheel: the adoptive family, life in the open air, voluntary work, a benevolent environment, and effective treatment. His plan, conceived for 300 lunatics, scattered over an area of 100 hectares, included a central infirmary for 150 acute patients, and houses for 150 others with chronic illnesses, each able to accommodate five patients. These houses, similar to those of the Gheelois, would vary according to the country and would be surrounded by fields, others occupied by various trades; all would have a garden. Each lot of five houses, or of 25 insane persons, would have a chief guard, and each lot of 10 houses or of 50 insane persons an assistant doctor: above them all would hover a medical inspector-director. At 2,000 francs per hectare and 2,000 francs per house, the land and houses for 300 lunatics would cost only 260,000 francs, out of a million that would be necessary for the entire establishment.

The type shown is that of a model warden's house. It is a cottage which occupies an area of about 93 square metres, and is divided by an alley into two equal halves, one for the keeper and his family, the other for one or more of the insane, depending on the occasion. The rooms intended for habitation are of variable length, but 3.75 metres wide and 3.30 metres high. The special provisions for the purpose consist of metal louvres on the doors and windows, which can be hidden or lowered at will, screens and blinds on the windows, volcanic rubber mattresses, and some mental therapy equipment.

Inside, there is a perspective plan of the model colony for 300 patients; a larger one for 1500 patients; plans, views and sections for a clinic for 300 lunatics at the gates of the large cities, for temporary houses of refuge to be established in the various districts. A coloured topographical plan of the commune of Gheel adorns one of the rooms. Underneath the latter is a library containing a collection of published writings on this locality.

Finally, the walls are lined with numerous inscriptions taken from the best works on this subject. The reading of these precepts, as well as the detailed study of the arrangements of the house, is apt to straighten out the education of the public in their feelings towards the insane, as well as that of the doctors in their treatment.

By its ingenious and economical distribution, Dr. Baron Mundy's cottage may even serve as a model for workers' dwellings; for its construction would cost only from 1500 to 2000 fr, and would give for this price much air, light and space, no odours or inconvenient aspects, and great facility of circulation and communication.