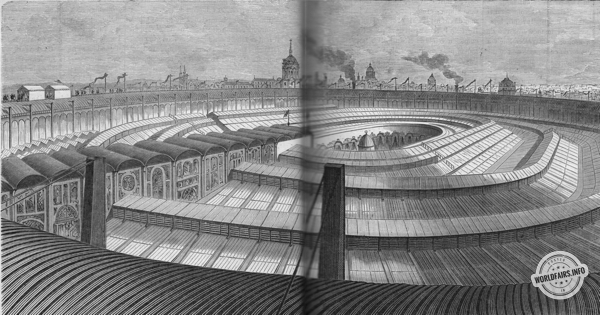 We are on the summit of the Palace. Let's orient ourselves, taking the centre and the foreground of the drawing that represents it. - On our left we see, firstly, the corrugated iron dome of the great vestibule with its painted stained glass walls, and further on the double tent of the Edoux lift, by which we went up. After going up, we had to turn right to get to the point where we are now, and you can measure the distance we have travelled.

See! Below us are the English machines: behind us and below us the eastern buildings of the Park and the English quarter. In this scorching sun, the domed windows shine before our eyes like molten lava or like the irradiated waves of the Adriatic. Beyond the summit of the Palace, the dome of the École Militaire appears first, and further on, if our eyes turn from right to left, the summit of the Val-de-Grâce, then the Panthéon, the Sorbonne, barely visible, and on the same plane as the École Militaire, the dome of the Invalides with its golden spire, then the double bell tower of Sainte-Clotilde, then the Tuileries further back, and finally, in the vagueness of the last plane, the Montmartre hills.

Once the Palais is down, the only view that can be contemplated, and less distinct, is from the heights of Passy, barely higher than the ridge of the Palais, with its 27 metres of altitude.

Immediately before our eyes, each undulation of the glass roof forms a concentric gallery, the first, that of raw materials; the second, that of furnishings; the third, that of clothing; finally, separated by a wall, those of the Fine Arts and the History of Work.

Our eyes plunge down to the central garden, where the Pavilion of Weights, Measures and Coins, which we have already mentioned and which we will mention again, points. We can see the entrance to the various sectors on the French Exhibition side. There are, as you know, 16 sectors, separated from each other by streets or radiating lanes, which have been named, on the French side, rue de Lorraine, rue d'Alsace, rue de Paris, forming the main road of the small axis, rue de Provence, etc., etc.

It is from the ridge that the whole of the Palais can be seen much better than from a ground plan. Thanks to the Edoux lift, more than two thousand people contemplate every day this ocean of glass that our drawing shows, with the panorama that fades away further on. If the Palais, which is a vast case under glass, is to be broken up, as we are assured, on 31 October, at least those who read this will have kept the faithful aspect.

But what we must tell them are the prodigies of ingenious science that had to be deployed to raise this splendid shelter for all the world's chosen products on the day in question.

It is raining on the Palais; and in the sleeting weather we have been experiencing, it was no mean feat, not only to prevent the rain from passing through the glass frames, but also to find drainage channels through the ridge. The first showers caused some damage, but how quickly it was repaired!

See this powerful framework, and calculate the difficulties of detail that had to be overcome in order not to fail. In truth, I tell you, the substructions of the Palace of which I spoke to you at the beginning of our audience are no more admirable in their construction than this immense bell under which it was necessary to circulate the air and the coolness, and whose resplendent undulations we are dominating at this moment.

The vault alone of the great vestibule, at the same level as the backbone of the machine gallery on which we are walking, is of corrugated iron. It breaks, like a pier protruding into the sea, the uniform undulations of the whole ridge.
The keystone of the great engine house is closed on the outside, as I said at the beginning of the publication, and not on the inside, which would have been customary. Also, you see these large pillars overhanging the roof of the gallery, which serve as supports like the columns of a suspension bridge.

This is an advance in the art of engineering which must be taken into account in the same way as that by which we succeeded in distributing the driving force in curves, a difficulty victoriously overcome by M. Cheyssou, engineer of the Imperial Commission, who had committed the future of his career to this success.

It is not enough that I do justice to the collaborators of the Imperial Commission: their work must survive.

What! all the nations declare that the ladder must be drawn after the Exhibition of 1867, that no other international exhibition is possible anywhere after that one; - and we would cheerfully break the mould into which all future exhibitions will necessarily fit! No, this is not possible, and before throwing the debris of this predestined edifice to the wind, we must think about it.

As for us, we will have done everything possible to avert this misfortune, and, in any case, to prevent its consequences.

For the rest, let us leave it to the gods. Of course, I am only talking about the gods as a reminder of a classic formula.