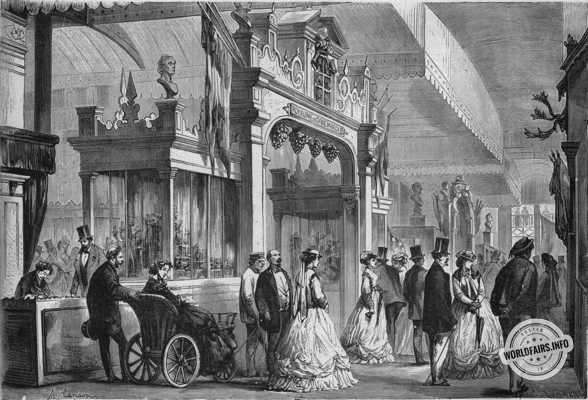 The Danish exhibition, squeezed between those of Sweden, Greece, Spain, Portugal and Russia, is almost impossible to find. It seems to be in hiding. This modesty, though undoubtedly unintentional, lends a new grace to the small Danish section, and one is happy and surprised to find in its display cabinets a host of objects that would certainly deserve a better place.

One should not always judge peoples by the space they occupy on a map; and this is only too true of Denmark. This industrious, enlightened, valiant people, who seem to be lost on a corner of the earth, beaten by the waves, who struggle unceasingly for the defence of their territory threatened by the sea or by ambitious neighbours, this people, we say, has long since won the esteem and sympathy of civilised nations: in many respects it has appeared to be the equal of the greatest peoples, and it is no vain homage that the representatives of France, gathered in its capital, are paying it at the present time.

Denmark, like all nations obliged to struggle ceaselessly with nature in order to maintain their existence, nourishes on its territory a robust, industrious and tireless population.

On this peninsula, which the sea is detaching more and more from the shore and which the sea is constantly undermining, live men for whom work is, so to speak, a vital condition; to work or to perish, such is their destiny. They have to fight the sea for their fields, their woods, their homes; and in this unequal struggle, how often they are defeated!

The Dane, like the Dutchman, must place between his enemy and himself ramparts that are always under attack and therefore always defended. The shores are covered with dykes that must be raised, maintained, raised, without a break or rest: for the sea never rests.

The dikes are not even a sure guarantee. The sea often manages to break them and the memory of terrible disasters has been kept. The one in 1631 was dreadful; almost the whole of Nordstrand was submerged; peninsulas detached from the land became islands: houses and villages were destroyed from top to bottom, and more than seven thousand people died in the waves.

But the energy of this hard-working man only increases with the difficulties, and despite the threats of the sea, he manages to spread wealth and prosperity around him.

Denmark is indeed admirably cultivated; not only does the farmer not allow the sea to invade him, but he invades it himself and sometimes manages to push it back. It is not uncommon to see, especially at the mouths of certain rivers, land formed in part by the silts brought in by the current. The farmer, by dint of patience and tenacious planting that thrives on the sand, ends up creating fields or meadows of fairly good value on this land.

It is well known that one of the resources of the Danish people consists of the excellent and numerous products of their fisheries. The Danes are a people of the sea, they live on it and by it: this terrible neighbour must have some kindness for them!

But agriculture and fishing are not the only sources of Danish wealth. Their many ships give Denmark a substantial income. The industrious people of this country are not content with securing their material life, they also cultivate their minds, they love intellectual life, and even in their last classes one meets with a lively desire to learn combined with certain enlightenment which it is rare to find among the people of considerable nations which appear more advanced in civilisation.

Let us not therefore be surprised at the sympathies which such a nation excites; it is small only in its territory.

At the Universal Exhibition, Denmark occupies a long but narrow gallery between Sweden and Greece. Is it by chance that Greece and Denmark, the northern and southern peninsulas, are so close together? I do not know. But Denmark deserves this connection: its artists seem to cherish Greece, and their art draws pure inspiration from the best sources of Greek antiquity.

We shall have several opportunities to observe this taste during the course of our rapid review. Let us hurry into the gallery and visit it in detail.

First of all, here are some hides and skins. Denmark, like Sweden, like Russia, like all the neighbouring countries of the Baltic, counts among its best revenues the breeding of cattle. Consequently, it exports a fairly large quantity of hides, and there are quite a few tanneries in its territory. It should not be thought, however, that this industry is relatively as important as it is in Sweden or Russia. The breeding of cattle in Denmark has never reached very considerable proportions. The pastures are of poor quality, and the results obtained by the breeders are not very satisfactory.

After hides and skins, we come to furs. Some of them are beautiful, but in general their number and quality cannot compare with the furs of Norway, Northern Russia and especially Siberia.

However, we see some remarkable products exhibited by Mr. Troille, a furrier in Copenhagen. His beautiful carpets made of polar and brown bear robes are particularly noteworthy.

Danish tallow is excellent. Candles are admirably prepared in various Danish establishments. Two exhibitors in this industry were awarded silver medals. The medal awarded to Mr. Asp, of Copenhagen, seemed to us especially well deserved. His bas-relief of stearin proves that his products are melted and cast with great care. This bas-relief, one and a half metres long, reproduces a charming work by Thorvaldsen, the great Danish artist, one could almost say the great Greek artist, so much so that Thorvaldsen was inspired by Greece in most of his compositions! This work is entitled: The Four Ages of Love; it is perfectly rendered, and is the highest praise that can be given to Mr. Asp's stearin.

Next to this bas-relief we see another artistic application of wax, in those mannequins with such natural figures which represent in a striking manner the inhabitants of the region. Let us bypass the crowd still grouped around these peaceful peasants, and give a simple glance at the sheets for the troops, exhibited by the royal factory of military sheets in Copenhagen. This factory is sufficient to make the clothes of the twenty-four thousand men of whom the Danish army is composed.

We see two masterpieces in Mr. Schwartz's showcase. A silver medal alone rewarded these exquisite works; the jury had no doubt exhausted its gold medals. Here is first a lace fan. Oh! the fine lace, exclaims one on all sides: the point of England, the point of Malines, are not more delicate...., it is true, but the lace of Mr. Schwartz is quite simply.... of ivory.

Admire again this wine jar, rotating on a pivot. It looks like a horn; so it is a horn, an ivory horn, like the one Roland sounded at Roncesvalles. The warrior, after having given his orders, raised the horn to his lips, not to sound the victory, but to quench his thirst; after having it filled with wine, he emptied it in one gulp and remained tall even in thirst.

Mr. Schwartz's wine horn alone would deserve a long description. A poem is carved on its sides. It is the poem of Isaiah Tigner, the Saga of Frithiof, whose twelve main scenes are reproduced in relief on the ivory walls.

Alongside these fine specimens of Danish art are successful imitations of Etruscan vases.

Next we see the products of the Royal Porcelain Factory in Copenhagen. These superior products have been put out of competition. Among the porcelains and biscuits of this factory, we notice beautiful landscape plates and other plates with various antique groups, small and charming delicate statuettes representing various gods and demi-gods, various characters of ancient Greece. Thus, as can be seen, Greece is in great honour among Danish artists.

Let us also admire a beautiful sideboard by Mr. Lund, supplier to LL. Messrs. the King and Queen of Denmark. This sideboard, on which are carved very fine arabesques, supports inlays of scales of a graceful effect.

In a special small room are the furniture of the Copenhagen Society founded in 1860.

The aim of this society is to encourage national industry and art. Each year it commissions a variety of articles from various Copenhagen manufacturers, executed to the designs and under the supervision of the best artists.

The results are excellent: the commissioned works are made with great art and care. The company then puts these items up for lottery. Among the works exhibited we note above all a very curious door in the style of the time of Christian IV. This door is exactly copied from the one in the old castle at Frederikborg. The wood of which this work is composed is very beautiful; two beautiful columns with ivory capitals decorate the sides. The same company exhibits various pieces of goldsmith's work, the details of which are exquisite. It should also be noted that the various pieces exhibited were inspired by Greek art.

Let us end this review with a few words about the 30 Danish paintings in the Exhibition. Several of the landscapes are a pleasure to look at. The Samson turning the millstone and making fun of the slaves is a lively, witty painting by M. Bloch. A grisaille by Mr. Simonsen, depicting an episode in the defence of Sleswig, is painted with a certain energy; but unfortunately the figures are rather badly arranged on the canvas: it is a bad effect.