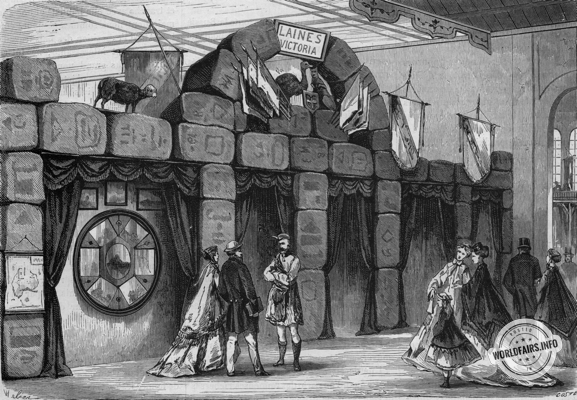 The Speaker of the House of Commons in England sits in Parliament on a small woollen bag. This custom is not as unusual as it may at first appear. England owed its first prosperity to the trade in herds and wools: it is to her honour and profit not to lose sight of this starting point, this remote cause of her present greatness. The President's woolen sack is therefore there to remind all members of Parliament of the simple origin of their fortune, and to urge them to see in agriculture and commerce the best sources of public and private prosperity.

Australia and Victoria, more than any other part of this continent, could have dazzled our eyes. It was so easy for this land of gold to build for itself at the World's Fair a golden palace, or at least a triumphal arch gilded on all sides, from the base to the top!

Nevertheless, it preferred a more modest installation to this dazzling display.

Australia owed, like England, its first prosperity to the wool trade, and the colony wanted, like the metropolis, not to lose sight of this starting point of its present fortune. It has therefore taken the woolen sack as its emblem, and even more so, it has taken it as its ornament.

I, for one, like the unadorned triumphal arch which Australia has placed before her all-agricultural and pastoral exhibition.

It consists of bales of wool stacked one on top of the other. These bales, of a very regular cubic shape, lend themselves like blocks of stone to certain architectural arrangements, and four pillars supporting three arched arcades have been formed. The two side arches give access to the gallery reserved for Australian products, the central arch is closed. Various photographs of Melbourne's major buildings can be seen here. This peaceful triumphal arch is surmounted by standing sheep which may, if you like, represent the quadriga that the Romans liked to place on top of their triumphal arches.

This last part is the most important, it sums up all the productions of the oceanic continent, so it is mainly Victoria that we will deal with.

Victoria, the smallest of the three divisions we have just indicated, occupies a territory of 86831 square miles, that is to say, about equal to that of Great Britain, but while the metropolis contains 14 million inhabitants in the same space, Victoria has scarcely 600 thousand. But Victoria is a very new colony, and from the first days of its establishment it has made truly prodigious progress. It has only been in existence for thirty-two years. It was in fact on August 15, 1835 that forty adventurers landed in Oceania in a small bay which they named Port Philipp. Since the first settlement the colony has not ceased to prosper, and the population has become more and more compact. Large towns have already been formed, and Melbourne, the capital of Victoria, already has over one hundred thousand inhabitants.

England daily congratulates itself on the growing prosperity of this settlement, which is second only to India, but not in every respect, for its progress is more rapid than that of India itself.

Victoria was included in previous exhibitions. At the great exhibition of 1862 she was even at the head of all the English colonies; it was then officially declared that her products formed the largest and most varied collection that had ever been sent to Europe by a British colony.

The discovery of gold in 1851 in the abundant mines of Australia had both good and bad effects on Victoria.

It diverted for several years almost all minds and almost all arms from agriculture. A veritable fever took hold of the settlers, they deserted the towns, abandoned their herds, pastures, and harvests to run to the mines and collect their share of gold, to make their fortune in a few days, but this disorder soon ceased, the exploitation of the mines organised by the Government with regularity no longer allowed for the prodigious and rapid gains, the production, moreover, soon fell by half, and the inhabitants almost all returned to their dwellings, which they should not have left. Agriculture and stock-raising were necessarily affected by this temporary neglect, but fortunately there remained in the colony a host of emigrants who had gone from England, Scotland and Ireland to seek their fortune in the mines of Victoria. Most of them found nothing but misery, but they have since devoted themselves to the agricultural and pastoral life in which they find wealth and, moreover, happiness.

While the products of Victoria are very varied, they are not all valued. Some are common. But wools form a superior class of products which have hitherto made the fortune of Australia, and which will always be one of the most important parts of that colony's income.

Australia is, indeed, admirably fitted for the breeding of sheep. The temperature of the country seldom reaches a very high degree, the country offers numerous meadows and excellent pastures, water alone is sometimes lacking, but, thanks to the abundant rains, it can be accumulated on the slopes of the hills, or in the valleys, in artificial reservoirs.

All breeds of sheep can be acclimatised under Australian skies, and even acquire more finesse, silkier and more delicate fleeces.

In general, the finest wool comes from the northern districts of Victoria. The climate of these northern provinces is more favourable than that of the Melbourne area, either for the breeding of cattle or for the development of their qualities. The wools acquire more fineness and brilliance there.

The dominant breeds in Australia are the angora sheep and the alpaca, which provide those fine and beautiful fabrics which have almost the lustre of silk. We see very fine specimens of these in the showcases of the Victorian Acclimatisation Society.

The international jury rewarded the Australian exhibitors with numerous silver and bronze medals.

It would be necessary to quote almost all the samples brought in, but that would be a bit long and we must limit ourselves to mentioning here the wools of Mr. John Bell, of Melbourne, those of Mr. Goldsborough, also of Melbourne, and of Mr. Learmouth, of Ercildown.

Mr. Goldsborough deserves a special mention, he has placed before our eyes ten bales of wool and various samples which present it in all its forms and in its various degrees. They are first fleeces in the raw state in ooze; then degreased fleeces, washed fleeces, and of a dazzling whiteness.

The Victoria commission also presents samples in various degrees of preparation, but it does more by placing before our eyes fabrics as well as shawls of pure wool and of very remarkable qualities.

These products, much sought after by European manufacturers, are fortunately quite numerous and can satisfy many demands. Thus, in 1865, Australia, or rather the colony of Victoria, exported 40,400,000 pounds of wool, that is to say, for a value of 75 million francs. This production is increasing day by day, and in the future it can only increase further.

The squatters, or herdsmen, formerly considered as vile and savage men, have become, thanks to certain immunities, thanks to the effective and direct protection of the government, the aristocracy of the country.

The squatters were once nomadic populations. The squatter did not cultivate the land, did not even raise his sheep, but merely walked them from pasture to pasture across the deserted meadows, and when a trafficker came along, he sold his flock on the hoof, and then formed another.

Today the squatter is no longer a nomad. The government rents him, in return for a right to graze, renewable from year to year, a certain area of grassland. The tenant squatter locks himself into his plot, which he has enclosed and on which he establishes his residence. He lives like a true settler, studying and practising the best means of making his livestock prosper and obtaining the most advantageous products. He no longer sells his flocks on the hoof, but knows how to dispose of the milk, meat, tallow, horn and fleeces produced by his sheep, in other words he raises his flocks with intelligence and makes them give back everything they can produce.