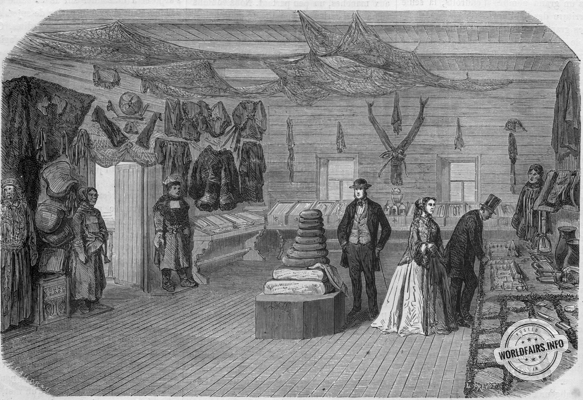 Separated from the dwelling house proper by an open shed, under which the instruments of agriculture were stored, the annex whose interior we wish to describe is devoted to classes 49, 69 and 70 in particular, i.e. to the raw or prepared products of hunting and fishing. First of all, we are obliged to make a slight reproach to the Russian commission, which has set up its exhibition of shaped wood so well, for having completely forgotten that the French chroniclers were all ignorant of the Russian language. Hence the fact that their keeper himself did not know a word of this beautiful language, and, even better, could not read Russian any more than he could read French, so that all sorts of information was forbidden to researchers.

Another reproach: most of the curious equipment gathered in this small house does not even bear the indispensable concordance number with the magnificent catalogue that the commission has had printed with the luxury and care that it knows how to put into these kinds of things. How is it that the negligence of which we complain, especially for the public, has occurred? We do not know, but the Commissioner General certainly does not know. May these few lines tell him at the same time!

We leave aside the cheeses, of which a very smelly pyramid fills the middle of the flat, and we approach the back of the small room, where the numerous samples of preserved fish are displayed, most of them simply dried in the open air. These fish come from the coasts of the Black Sea and the Caspian Sea. The government of Kersen on the former, and the vicinity of the Crimea, the mouths of the Volga, Astrakhan, on the latter, seem to be the places of greatest production or at least of concentration of these products unknown to us, but whose use can be very easily explained by the customs of the Russian populations.

In fact, the rites of the Greek religion, strictly observed by the people, forbid the use of meat during a series of Lenten periods which can be estimated at a third of the year; it is therefore necessary to make up for this by eating fish, and as, in the final analysis, not all the districts touch the sea or the great rivers, to draw from them a supply which is indispensable to such a long, lean diet. On the other hand, the Russian waters are fertile in fish, from which it follows that fishing plays a very important part among the industries of the empire, and that fish constitutes, in a great number of places, the only food of the inhabitants.

The great fisheries are situated mainly on the shores of the Black Sea, the Sea of Azof, and the Caspian Sea; some are also situated on the banks of the great rivers near their mouths, for example the Don, the Volga, the Ural, the Dniester, the Dniper, etc. These fisheries are real factories, considerable factories that entrepreneurs operate and for the operation of which they erect, in the designated places, accommodation for the workers, and useful buildings for the salting and drying of the fish of which we see samples, the manufacture of caviar, the Russian national dish, fish glue, and Vesiga, the backbone of the great sturgeon, which is sought after for the table when it has undergone special culinary preparation, but which seems to us, despite the embellishments and embellishments imparted to it by the producers, to be a mere white variety of the strong glue

Among the dried fish that we encounter, we must mention breams of 0m,40 in length, especially sandrats (lucioperca sandra), this fish that one wanted to acclimatise here and that one can call a perch with pike teeth, that is to say an eater and a devastator added to those that are already only in too great a number in our impoverished waters. There are sandrat, sent by the Cossacks from the banks of the Kuban to the Black Sea, which are 1.20 metres long and proportionately large: some are simply dried, others are smoked. One also sees pikes, white fish, sorts of suckers or chub (cyp. grislagine and jeses) whose flesh full of bones must have nothing pleasant.

But the main fishery is that which is called, in the country, the fishing of goldfish, that is to say that of the sturgeon and its two or three varieties, some individuals of which are 3, 4 and 6 metres long and weigh several hundred kilos. The quantity of these fishes that are prepared is enormous, and yet all this is not yet sufficient for Russia's consumption of fish; she must ask for more than six million francs a year from Norway.

The objects we have just reviewed are really the most interesting part of this exhibition. We will add to them some nets or specimens which offer nothing new. As for the other objects, they are the real remains of wild peoples. To the walls are attached skin garments of all kinds, from the seal garment, transparent as wet parchment, to the black or brown bear skin robe, more or less studded with embroidery added at the bottom, top, sleeves, and all over. We would like to point out the curious remains of two felines, one of a rather thin royal tiger and the other of a sort of white panther with grey eyes without the beautiful yellow tone that makes these skins so beautiful. It looks like a panther dyed by the cold.

Here are the game traps of Siberia, built of birch branches and equipped with their bow with gut string, axes, arrows, tridents, spearheads, spoons of bone in one piece; then seats, some triangular, others magisterial, and all made of wood with little padding, but embellished with knife cuts. Add to this a walrus head, and we have what the Yakuts, Chokuts and other peoples of the Don, Arkangel, Siberia, Astrakhan, etc., thought would interest us.

Poor people! They have sculpted for us the scenes of their ordinary life. Here is the arrival of the sledge loaded with Towers killed in the common hunt, the village, the dogs, the horse pen, the women and children. Then, next to it, the details of the terrible fight that had to be fought with the bear, which was recalcitrant in allowing itself to be undressed without saying a word, and the homeric blows with its paws and jaws. A man is dead, watch out! And, during this time, the dog - so the naive sculptor wanted - watches with a stoic air the defeat of his master, sitting gravely on his good man and with his tail in trumpet!